The Foley lawyer and Bradley Center chairman will be helping taxpayers see the wisdom of building a new NBA arena.

Attorney Marc Marotta [Harvard ‘87] is Chairman of the Board of Directors of the State-chartered Bradley Center Sports and Recreation Corporation, owner of the BMO Harris Bradley Center. In this capacity he will be the point man in getting the facility replaced by a new arena compliant with NBA standards.

Marotta is a partner in the Foley & Lardner LLP law firm, which encourages its lawyers to serve the community with public service. And if it also happens to serve the clients, really go for it!

Fourteen Foley lawyers were named as members of the team representing Herb Kohl in his sale of the Milwaukee Bucks earlier this month for $550 million. Marotta apparently sat this one out, unless he was one of the “among others” mentioned in the firm’s press release. However it was he, not any other Foley & Lardner pardner, who spoke at the press conference announcing the sale.

Marotta will certainly not be on the sidelines as a new arena is sought and fought over. He will be faced with the task of assembling a suitable building parcel as well as financing its purchase and the construction of a new facility. The $200 million promised by the seller and the new owners will not be enough to foot the bill.

Mayor Barrett and others have called for a regional tax to help pay for the stadium. If Marotta has to help this pass, he will get a taste of the struggle ahead by reading the Resolution Opposing a Tax to Fund a New Sports Arena in Downtown Milwaukee that was passed by the Executive Committee of the Ozaukee County Board of Supervisors in September 2013. Ozaukee County contributes to the 0.1 per cent Miller Park tax, and wants no part of another:

WHEREAS, Ozaukee County and the cities, villages, and towns within Ozaukee have their own valued cultural and ‘quality of life’ assets that they manage and budget for as their priorities dictate and have never lobbied the state to impose a shared tax on the regional taxpayers to help support cultural and ‘quality of life’ assets in Ozaukee County,” we won’t do it for Milwaukee, the good burghers of the board haughtily resolved. 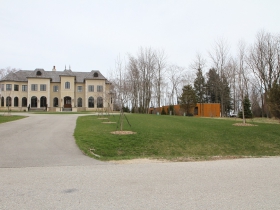 With these and other pressures before Marotta, not to mention his responsibilities at work dealing with “Transactional & Securities and Public Affairs Practices,” it is comforting to know the attorney can leave his office in the US Bank Building behind him at the end of a day’s work and head to his custom-built lakefront home in the City of Mequon — yes, that’s in Ozaukee County — where he resides with his wife Kim Marotta, Director of Sustainability at Miller Coors, and their four children.

The first task is probably to find them in this cavernous dwelling, built in 2010. It has 17 rooms, of which 7 are bedrooms. There are 6 full baths and 3 half-baths in the home, along with “5 add’l fixtures”

Oh, we’ll find them later — off to the 5,605 square foot basement, of which 4,926 square feet is a finished rec room. That is a lot of recreating. Above is a first floor with 4,623 square feet of living space, surmounted by a more modestly sized 3,821 square foot second floor. Maybe it’s time to search around the 982 square foot attached garage with lake views and see if the kids are there, transfixed by the waves below.

This is one big house. It is located on N. Circle Road, east of N. Lake Shore Drive and north of E. Donges Bay Rd. in southeast Mequon.

Circle Road is true to its name, but it is a cul-de-sac with a reason, since it loops around an attractive chunk of land with only one access point. The western end of the subdivision still retains the original homes of the late 1950’s – early 1960’s that were built here. Some original residents remain. Others, like Ted Glorioso, have long since moved on. The Swiss-style chalet home built by Ozaukee County Supervisor (in a gentler era) and Swiss native Fred Bote remains, although he has died.

But it is toward the east side of the circular road that the street looks entirely different than its historic antecedent. The east side, especially those lots on the lake, has been almost entirely transformed as demand for lakefront property has marched relentlessly along its shore. Many of the original homes have been torn down to be replaced by very large homes like that of the Marottas, which hulk largely, and could as likely occupy a spot on a country club fairway as the bluffs of a beautiful lake.

The Marotta home had been the site of the Gettelman home for perhaps 40 or more years. That structure was of conventional upper middle class mid-century ranch architecture, with perhaps a few concessions (more windows) to its lake location. It sat nicely on its property, as did its neighbors. A passerby could actually see Lake Michigan beyond, and the neighborhood had a certain unity.

The homes on the north end of the circle abutted Virmond Park, an Ozaukee County-owned property that gives you a good idea of the “priorities that dictate” Ozaukee County when it comes to budget for and manage its “quality of life” public spaces. Precious little is spent on that. To the south, the subdivision was immediately next door to the Chalet on the Lake Restaurant, which ended its decades long run in 1991 when it was shot up for a TV movie on John Dillinger, where it stood in for the Little Bohemia resort.

The Marotta home, with its tall ceilings and repetitive arched windows, looks like it longs to return to the cover of a Gothic romance novel. It does not sit well on its site. The home has a clearly defined main entry crowned with a turret with spikes! To the north a broad staircase leads from the elevated first floor directly to a grassy lawn below. Surely, a terrace should have surrounded the first floor, and the stairs should have led to a formally structured parterre. Instead, a row of recently planted trees emphasize the austerity of the dwelling.

By contrast, the visitor is encouraged to look at the orange structure to the south of the Marotta home. It could easily be overlooked, but upon closer inspection you can see a modern full-sized home dwarfed by the giant shadow cast by its neighboring McMansion.

Marc Marotta joined Foley & Lardner in 1987 and left in 2003 to serve as the Secretary of the Department of Administration for Governor Jim Doyle, where he was tasked with implementing a $54 billion budget. Marotta resigned from the job after just two years, but not before seeing his name besmirched in the trumped-up Georgia Thompson affair, and for his involvement in a UW-Milwaukee building project that generated controversy. No wrong doing by Marotta was ever proven, but he may have decided he’d had enough of the vicious politics in the state Capitol.

Marotta was a three-time Academic All American in basketball at Marquette University, where he played forward (at 6 foot seven inches), was a teammate of Doc Rivers and was the team’s leading rebounder. After getting his undergraduate degree he headed off to Harvard Law. Today, he serves as the chair of the Bradley Center board, and on the Summerfest board. He is also involved with the Boys and Girls Club of Milwaukee and the Greater Milwaukee Committee. He is a member of Tripoli Country Club, where he golfed 15 times last season. He began this golf year with a 9.7 handicap, two strokes below his high for last season of 11.8. His wife Kim also played 15 times last year at Tripoli, including three tournaments. Her handicap is 15.1.

Marotta recently made headlines for blasting Buzz Williams for leaving his high-paid position as MU Basketball coach and taking a job with Virginia Tech. Marotta called it “one of the most idiotic moves I’ve ever seen.”

How Milwaukee Is It? The residence is 14 miles from City Hall. 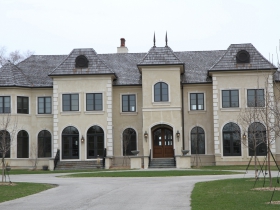 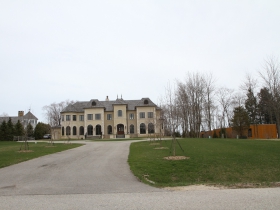 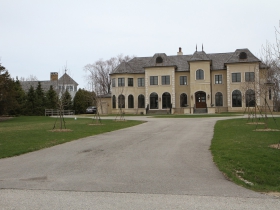 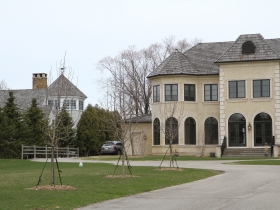 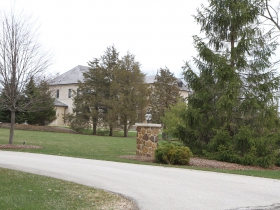