One of the earliest postcards done of the city shows Downtown along the river. 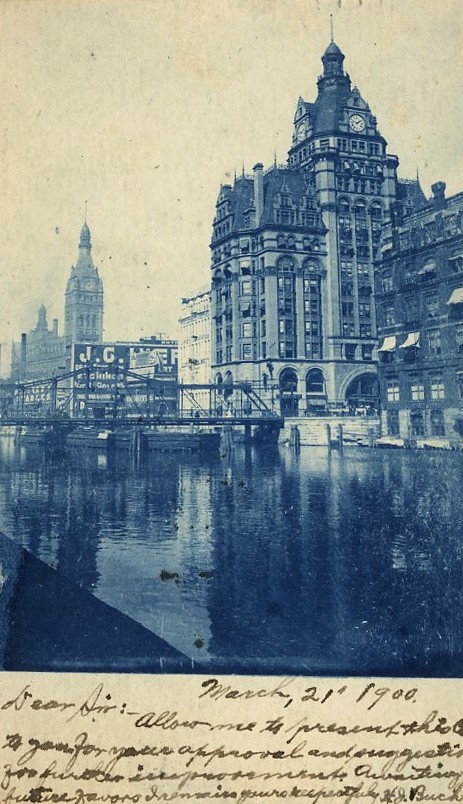 Postcards, although already common in Europe, were a novelty when introduced at the Columbian Exposition, held in Chicago in 1893. From there, it took a few years before views of Milwaukee were published. The first were produced in 1897 by the American Souvenir Card Co. which produced a series of 12 lithographed views of the city. The next year a local competitor would appear, E.C. Kropp who during his career would produce hundreds of local views. Still later came the “real photograph” —  a view that used photo paper and would be produced in much smaller quantities. The earliest that can be found date from 1905 or later.

But the view illustrated here is a rare exception. This is a view taken from just north of the west end of the Michigan St. bridge and looking northeast. It is likely an amateur photograph and the sender conveniently dated it at March 21, 1900. The blue color is real as this is a cyanotype. These are far less common than the black-and-white photographs that predominated at the time.

This view focuses on two of the city’s most prominent landmarks, the Pabst Building to the right, and City Hall to the left. The iron bridge is Wisconsin Ave., and had been constructed in 1882 so it was relatively new.

The Pabst Building, a 14-story, neo-gothic high-rise built in 1891, was the tallest building in Milwaukee until City Hall was built four years later. Many may remember the Pabst Building, as it stood till 1981, when it was replaced by the 100 East Building, which still occupies the site

Photographic postcards would never be as common as lithographed ones, but to the collector they offer more rarity and subjects that were overlooked by competitors. Many more will appear in this column.