New bike lanes and bike boxes approved. Tosa is now so cool that Bay View folks are moving there.

By Dave Schlabowske, Bike Federation of Wisconsin - May 9th, 2014 10:16 am
Get a daily rundown of the top stories on Urban Milwaukee

Before a packed room of residents asking for enhanced bicycle and pedestrian facilities, Wauwatosa’s Community Development Committee unanimously approved plans for green bike lanes and advance bike boxes on North Avenue, from 76th to 60th Street, on April 29th. At the request of some members, the Wisconsin Bike Fed sent out two action alerts to encourage area residents to show up for the meeting, sent staff to the meeting to testify and submitted a letter of support for the roadway improvements. 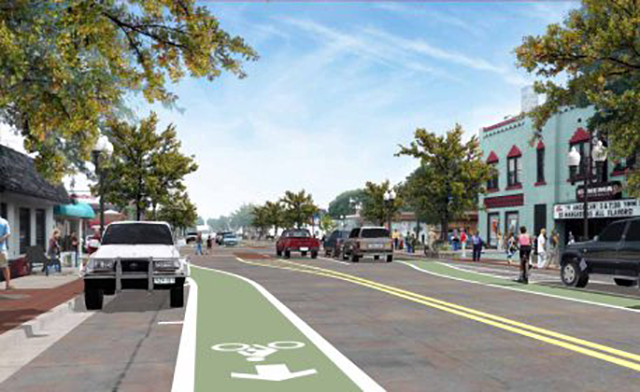 The approved plan includes a skip dash green pattern rather than a continuous green lanes as shown in this earlier rendering of the North Avenue project.

The  project will also remove the series of left-turn-only lanes that create a chicane driving pattern and pull back the noses of the curb extensions to allow for the continuous bike lanes. Improvements for walking will include red crosswalks and median islands at 73rd, 72nd and 64th Streets.

Supporters of the plan argued the green lanes are key to promoting future investment in the east Wauwatosa neighborhood and its fast-growing business district that has landed a number of bicycle friendly businesses such as Juniper 61, the New BelAir Cantina, Rocket Baby Bakery, Red Dot and Camp Bar.

Kevin Hardman, Wauwatosa resident and former Executive Director of the Wisconsin Bike Fed, related a story of a Bay View resident who told him he loved Wauwatosa and how many of his friends had moved there from Bay View when they bought homes.

“I can’t emphasize enough the significance of this vote. By including these improvements on North Ave. we signal to our residents, our visitors and potential investors (both businesses and new home owners) that ‘Tosa is a truly unique, wonderful, world-class community. These green lanes will not only make bicycling better, they will make it safer to walk, safer to drive and much easier for businesses to invest in North Avenue. These green lanes will visibly signify to people around the region that Tosa is the place to be.” 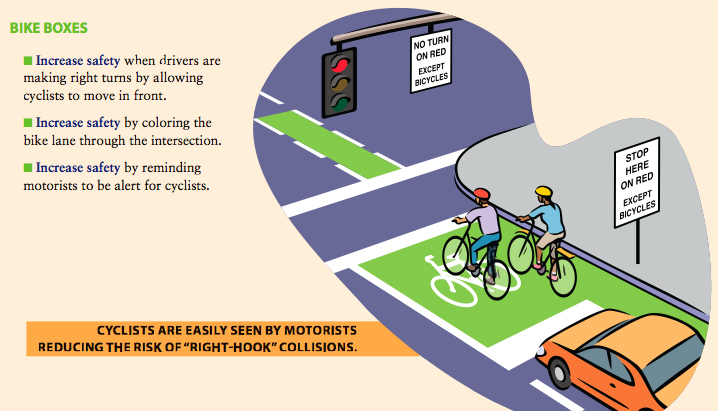 Image from a Portland DOT glossy on bike boxes.

Other residents who complained drivers honk at them and refuse to let them cross the street, argued the green lanes, bike boxes and red crosswalks would serve as permanent reminders that people have a legal right to ride bicycles and cars need to yield the right of way to people trying to cross the street.

In a related agenda item, the Committee also unanimously approved a study to extend the bike lanes further west from Wauwatosa Ave to the Menomonee River Parkway. And on May 6th, the Tosa Common Council approved the new bike-oriented projects. It’s wonderful to see how the residents and elected officials in Wauwatosa have come come to understand how improving conditions for walking and bicycling will make their community a better place to live, visit, work and invest in.