It was back on April 7 that Urban Milwaukee reported that architect Jim Shields had dropped out of the project to build a lakeside addition to the Milwaukee Art Museum. Shields also said the museum’s newly-announced design was not his work.

On April 10th, Urban Milwaukee’s architecture critic, Tom Bamberger, wrote a column blasting the revised design as “a monumental blunder,” that “cannot, must not be built.”

The Milwaukee Journal Sentinel, meanwhile, offered an editorial roundup (on April 13) championing the addition. “It’s good to see the Milwaukee Art Museum moving ahead with designs for its addition on the lakefront… It’s an exciting project,” the newspaper editorialized.

So things stood until the newspaper’s art and architecture critic Mary Louise Schumacher came out with her view, in a story published in the May 4, Sunday arts section, where she dismissed the addition for its “humdrum design.”

“Unfortunately, the museum is proposing a dose of dullness for our most prized public space, a revision of a much more elegant design unveiled two years ago by architect Jim Shields,” Schumacher announced.

I’m glad to see Schumacher weigh in on this issue, if belatedly, and I hope her viewpoint carries some sway, both with her newspaper’s editorial board, and with board members of the Milwaukee Art Museum.

But I question Schumacher’s suggested solution, that the museum should hold off for now and not build any addition: “I believe the museum should simply stop building for a time… The most daring thing to do right now is to build nothing at all.”

While Shields’ design for the addition is better, Schumacher says, “either would be a stopgap measure, a sort of half wing that would tide the museum over until it builds a full one, which many at the museum including director Dan Keegan consider an inevitability within a decade or so.”

The problem with this suggestion is both the Kahler addition and the War Memorial have well-documented problems that endanger the museum’s art collection and must be repaired as soon as possible. Keegan’s creative solution was to tackle that problem while also creating a new lakefront addition. Unfortunately Keegan and his staff eventually lost sight of that original objective and have decided to make their lust for more exhibition space drive the design, with disastrous consequences.

Schumacher, instead, suggests the museum simply try to restore the old design of the Kahler addition: “It is often accused of being a hopeless eyesore, but this is after years of misguided modifications and neglect. Its eastern face with concrete cubes and deeply recessed windows was handsome in its day. It was an entrance once. Let it be so again.”

That’s not such a bad idea, strictly from the perspective of design. But practically speaking, trying to raise money from donors to go backwards seems like a difficult sale to close. And if you truly restore the Kahler, you lose the new space created by enclosing the seldom-used sculpture garden. Meanwhile, I doubt you would save any money. I think at this point Keegan’s instinct to start from scratch makes more sense, both architecturally and financially. If only he could be convinced to let Shields create a real design for the addition. 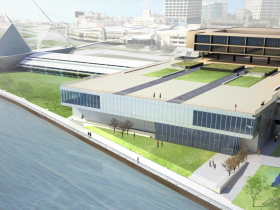 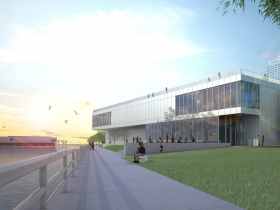 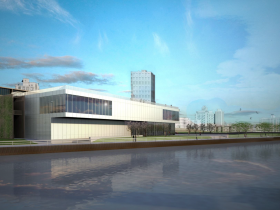 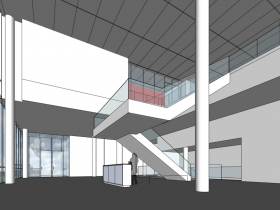 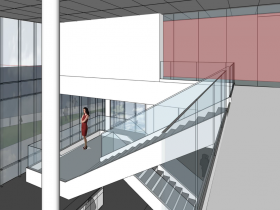