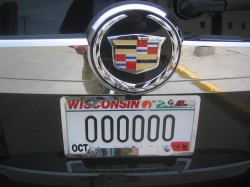 License plate 000000 is borne by a Milwaukee Bucks team vehicle parked outside the BMO Harris Bradley Center shortly before the team’s sale was announced.

Last week I passed the Bradley Center downtown and noticed a Cadillac SUV with the unforgettable license plate of “000000.” On the front of the shiny black vehicle was a Milwaukee Bucks plate where the State of Wisconsin license plate should be. “Something must be up,” I figured, guessing that the Cadillac was a team vehicle, and likely not that of a player. We learned yesterday that something indeed was up, and that the Milwaukee Bucks had been sold by owner Herb Kohl for $550 million. Kohl and the new owners each pledged $100 million toward the construction of a new basketball facility, which will be required under NBA rules.

The new stadium, by all accounts, will be located downtown — somewhere. Possible sites include a portion of the demised Park East Freeway north of the current arena, the old arena to the south, even perhaps the Milwaukee Journal Sentinel‘s mostly vacant facility to the east of the arena.

One thing seems certain — the Bucks will not only be in Milwaukee for some time to come, they will also be playing downtown. The Bucks have played downtown since the team’s inception in 1968, first at the arena, and since the 1988-89 season at what is now the BMO Harris Bradley Center.

However, things could have been much different, as history shows. You see, the original plans were to have the Bucks arena built east of County Stadium, approximately where Miller Park now stands.  “Bradley Center Work Likely to Start in Fall,” read a headline in the August 1st, 1985 Milwaukee Journal, which described the plans of  Jane and Lloyd Pettit, who announced their intention to donate the arena to the community four days after Herb Kohl bought the team on March 1st, 1985.

But a problem soon arose. County Stadium was built on land formerly owned by the US Veterans Administration. Any use of the site for other than professional baseball would have voided the deed and forced the return of the property to the VA. But the problem was soon solved by legislation sponsored by Sen. Robert W. Kasten, Jr., which provided an exception to the rule. Kasten introduced his amendment to a veterans health bill, and county government, for its part, snapped up a 99-year lease on the site.

However, the United States Senate, the county executive, the millionaire donors of the Bradley Center, and supportive business leaders were no match for the man who sat in his office in the second floor of City Hall. Henry W. Maier, the longest-serving mayor of the City of Milwaukee, then in his 25th year in office, decreed that the arena must be built downtown. Maier insisted on this, repeatedly, relentlessly, even in the face of withering criticism from some members of the media, including Charlie Sykes, then the young editor of Milwaukee Magazine, who never missed an opportunity to dump on the mayor.  Nineteen months later, in October 1986, one of 1,300 pilings was pounded into the ground at the northwest corner of N. 4th and W. State streets. At the time, I had just returned to my hometown after living away for some while, and I grabbed my late grandmother’s Gremlin and headed downtown for the big event where the Pettits would push a button to drive a silver-colored pile into the ground.

Jane Pettit was characteristically silent at the event, but her then-husband Lloyd addressed the crowd, saying, “when we announced our plans to build the center on March 5th, 1985, we didn’t realize it would take 19 months. We thought we could just put it down. … We didn’t realize the magnitude of it all.”

Pettit could have said he didn’t realize the magnitude of a Henry Maier demand, one that could render an act of Congress moot. By March 1986 plans for the County Stadium site were a distant memory, and the city quickly assembled the site for the Bradley Center downtown on a largely vacant parcel that housed the Rescue Mission, a wholesale business and an ancient gay bar called the Mint. All but the Mint were relocated elsewhere.

Taking the podium for his remarks, Maier somewhat brashly addressed the philanthropists telling them he knew they wanted the arena built out by County Stadium, but that he told them they had to build it downtown. “The value of all of this in terms of Milwaukee’s image to our residents and across the nation cannot be measured, but it will be immense. All of these benefits will result because the Bradley Center is being built where it belongs: Downtown.”

Maier also predicted the Bradley Center would have been a catalyst for development of hotels and other attractions, and his vision might have been a bit roseate in that respect, as time has shown, though it did lead the revival of Water Street and its many taverns. But the city also ended up paying for the “free” Bradley Center, as Bruce Murphy has reported: the city built the next door parking structure, paid for infrastructure and agreed to kickback 15 percent of all revenue from the U.S. Cellular Arena for ten years. The total subsidy was estimated to be more than $50 million by Maier’s successor John Norquist.

A new, 21st century Bucks arena is likely to be dedicated around 30 years after the Bradley Center’s dedication, and it almost certainly will be downtown. We won’t need the United States Senate to void a deed restriction to build it on former VA property on the west end of town.

Now, if only Maier had been in office when Bud Selig came up with his crazy idea to build Miller Park near the old County Stadium, downtown would be even stronger. But the days of building basketball arenas in the hinterlands are behind us, thanks to the decisive action of a quirky and determined politician.

Here is a link to numerous articles outlining the search for a site for the Bradley Center. 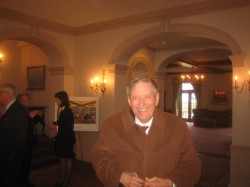 Bud Selig made an appearance at the monthly meeting of the Greater Milwaukee Committee on April 14th, at the University Club, telling the smaller-than-usual crowd of CEOs about his experience as the owner of the Milwaukee Brewers and his career as Commissioner of Major League Baseball, now in its final year. (It was Passover, and Spring Break, so a lot of people were out of town.) He appeared after the Brewers team had won 8 straight games, saying, “my timing is remarkably good.” Selig has taught history part time at Marquette University since 2009, and said as a youth he “wanted to be a history professor, and some days I wish I was.”

But this was not one of those days. The Brewers are winning, Miller Park produced $327 million in revenue the previous year, revenue is shared within the league, and the smallest market team in baseball is doing just fine, he said. “We’ve done what we have to do” on the problem of steroids, as well, he said. Selig brought the Brewers to Milwaukee after the Braves departed for Atlanta. “All we did was rip the ‘S’ off the uniforms and put on an ‘M,’ for the first season of the new team, he said.

And now, look where we are: not only do we have racing sausages, one of the sausages is a Chorizo, which was mighty hard to come by in Milwaukee in 1970. True to his professorial mien, Selig looks at baseball as a “Social Institution,” and toward that end, he is promoting the creation of Baseball Academies in Atlanta, Philadelphia, Cincinnati, Houston and Compton to inculcate an interest in the game among the young in underserved communities, and to provide educational opportunities. He said he hopes for a similar academy here in Wisconsin.

The day before, Selig had been in Phoenix, and the next day he was scheduled to go to New York to celebrate Jackie Robinson Day, commemorating what Selig called the “most important moment in baseball history, when Jackie Robinson broke the color barrier.” That trip would also take him to Yankee Stadium to participate in the MLB Diversity Council meeting.

Later that week, Selig planned to fly to Atlanta to hang out with Henry Aaron, “an underrated player,”  with whom he said he has had “8,000 conversations” over the years. Henry Aaron is a very patient man.

Selig said that when he took over the commissioner’s job, only a few large market teams would routinely be competitive. But after his innovations, like the wild card playoffs, interleague play and revenue sharing, (which he said George Steinbrenner called “communist,”) things improved markedly. “In the last 10 years, 26 of 30 teams have made it to the playoffs, he said.

Looking toward the future, he said the sport “has a chance to grow internationally beyond any of our comprehension.” 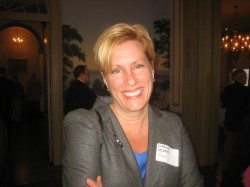 In 1858 Friedrich Dohmen opened a wholesale pharmacy in the Third Ward of Milwaukee. Eventually, the firm, which had an office on the west side of N. Water St. between E. Buffalo and E. St. Paul streets, moved out to Menomonee Falls where the firm, now known as Dohmen Life Sciences Services is in its fifth generation of family ownership.

I spoke with Dohmen CEO Cynthia LaConte, a member of “Generation V” of the firm about plans to pull up stakes and relocate back home in the (now) Historic Third Ward. LaConte, of Fox Point, seemed particularly enthused about the move to the building on the southeast corner of E. Chicago and N. Milwaukee streets that was the former office of Milwaukee Magazine and the site of a couple of failed taverns. “I’ve heard some complaints about the commute,” she said, ” but I expect as time goes on more employees will move downtown.”  LaConte said she has plans to bike to work on occasion. She certainly hopes to recruit her workers from the Millenials who favor urban life, and says the city’s attractions will be persuasive for a number of them. Gone for them will be the days of nothing to do in Menomonee Falls after work — or even during the day, where it takes an automobile excursion just to grab a bite for lunch. 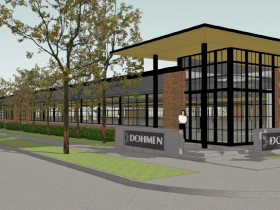 One place the employees will certainly visit for lunch is the Milwaukee Public Market, 400 N. Water St., just kitty corner from the Dohmen offices of Generation I. The bustling market building was designed by The Kubala Washatko Architects, Inc., who are also designing the remodeling of the new Dohmen offices, a rendering of which was made available to Urban Milwaukee thanks to Ms. LaConte. The firm will have an initial move-in of about 160 employees when the new facility is ready around October, said Kirsten Corbell of the firm, and expects to have about 200 employees shortly thereafter. The new workers should be easier to find in the Third Ward than they are in Menomonee Falls. Now, if only the management of Kohl’s, another Menomonee Falls company, would realize that!