Myths About a New NBA Arena

In their zeal to build new, publicly-funded arena, proponents are misleading the community. 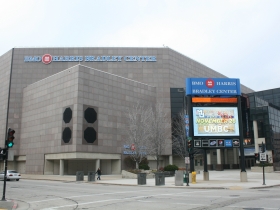 The good news, a Milwaukee Journal Sentinel editorial noted, is that there is “plenty of time for a deal” if civic leaders want to build a new NBA arena.  Citing a recent forum on the issue sponsored by the newspaper and Marquette University Law School, the editorial noted that Milwaukee has been wise to start this discussion before we face a crisis.

In fact, this allegedly timely discussion has now been going on for more than 14 years. It was back in December 1998, that the Milwaukee Bucks hired Foley & Lardner attorney Ron Walter as a senior executive to help the team concoct a plan to get a tax subsidy to radically renovate the Bradley Center.  Soon there was a Greater Milwaukee Committee task force looking into the plan and beginning in 1999, sports writers began beating the drum for some kind of tax support to bail out the Milwaukee Bucks.

After studies showed it wasn’t cost effective to reconfigure the Bradley Center, the new goal was to build a new arena, and for more than a decade we’ve seen periodic news stories telling us the Bradley Center is now one of the oldest in the NBA and must be replaced. The forum co-sponsored by the newspaper is simply the latest attempt to sell political leaders and voters on a project they continue to resist. In the course of this discussion, we are told many things that aren’t quite true, including:

Pro Sports Venues Have a Huge Economic Impact: That’s how Miller Park and many other sports facilities have been sold. The new model is Oklahoma City, which built an arena that attracted the NBA team once known as the Seattle Supersonics. Oklahoma City used a sales tax to build the arena and make other civic improvements, and has claimed that $357 million in spending generated $5 billion in related investments.

In fact, as a recent study by Milwaukee’s Legislative Reference Bureau found, “the actual number is closer to $500 million, one-tenth of the… cited impact.”  In an amusing section of the study, it notes that Oklahoma was claiming such “related investments” as a federal highway and the rebuilding of the federal building destroyed in the infamous 1995 bombing.

“Overall, publicly-financed sports venues have not paid off economically for the city, county or state governments financing them, at least in the last 15 years,” concluded the LRB report, which got cursory coverage by the JS.

Nationally, there is a consensus by economists that the impact of sports stadiums and arenas is minimal, because most spending on the team is by local residents, most of it would otherwise have been spent on other local offerings, and much of the income generated by the team goes to ballplayers who typically don’t live in that community.

Those studies that find an economic impact are usually by consultants hired by the teams. Thus, Robert Leib wrote an op ed a while back touting the economic impact of the Milwaukee Brewers, and cited a “study” he did. Leib runs Leib Advisors LLC, a Mequon-based sports and entertainment industry consulting firm. His study cannot be found on its website (or anywhere else) and when I requested a copy, Leib didn’t respond.

Pro Sports Have an Intangible Impact: This is the fallback position from the economic impact argument. As the JS editorial put it, “while there may not be direct proof of economic benefit from a new arena, the indirect benefits for marketing Milwaukee across the country… cannot be ignored.” How many people in the world think of Milwaukee because of the Milwaukee Bucks? I’m guessing the number is small and the impact negligible. It’s probably a help to local businesses when recruiting executives, but only in some cases, as just 36 percent of Americans call themselves fans of pro basketball.

Our Community’s Identity is at Stake: It’s about “community pride and prestige,” the JS suggested. “Losing the Milwaukee Bucks would be a terrible blow to the city and region.” It would certainly be a blow to the newspaper, whose readership and revenues are heavily dependent on pro sports. And for NBA fans like me, it would be sad to lose the Bucks. But let’s face it: most of the money spent on pro sports goes to the millionaire owners and ballplayers, not to anyone or any cause in the community. As Ald. Michael Murphy notes, the city of Milwaukee can’t even afford to raze foreclosed homes in the city, so how can it afford to bailout a sports team? “I don’t know if a city that is the fourth poorest city in the United States can keep up with the insatiable appetite of NBA basketball,” Murphy contends.

The Bucks are Losing Money: This is a standard way to sell a community on bailouts. In reality, no pro sports owner ever loses money. Yes, Bucks owner Herb Kohl has probably lost some money in some years, but every owner always recoups this when the team is sold. Kohl has seen the franchise’s value rise 16-fold, from $19 million when he bought it in 1985 to an astounding $312 million today, according to the latest analysis by Forbes magazine. And that still leaves the Bucks franchise dead last among NBA teams. But the team’s value would rise dramatically if a new arena that generates more revenue is built. In short, Kohl, who has offered to help pay for the arena, could probably recoup his contribution immediately as the franchise’s value increases.

And Kohl’s occasional years of losing money could be banished by the NBA’s new revenue sharing plan. “When fully phased in by the 2013-14 season, it will see a stunning $140 million in additional revenue sharing coming into play compared with last year,” as Street & Smith’s Sports Business reports. Most of that money, it notes, will go to the seven neediest NBA teams, including the Bucks, who could get as much as $16 million per team per year.

The Bradley Center was Free: The argument is made to let us know how lucky we taxpayers are, compared to those in other cities, and to soften us up for paying for the next arena. It was a relative bargain, but city taxpayers did pay significantly.  The city built the Bradley Center’s parking structure and also paid for some infrastructure. With interest on the bonds for this, former comptroller James McCann once calculated the full cost for taxpayers at $33 million. In addition, the old MECCA arena, then run by the city, was required to hand over 15 percent of all proceeds from its bookings to the Bradley Center for the new facility’s first 10 years of operation. This protected the Bradley Center from competition, allowing it to funnel more revenue to the Bucks while reducing revenues for MECCA arena and thereby increasing its costs for city taxpayers. All told, former Mayor John Norquist once estimated, the total subsidy for the Bradley Center might have been as high as $50 million.

A New Arena Would Help Other Teams, Too: You see this sort of argument from sport writers like Dennis Krause, who contends  that a new venue would help the Marquette basketball team and the Milwaukee Admirals hockey team. But the Bradley Center works just fine for both. And much of the revenue generated by both teams actually goes to the Bucks, who pay no rent and are heavily subsidized by the Bradley Center. This is only about bucks for the Bucks, who need a bigger arena with more revenue generating amenities.

A Regional Tax is Needed: Sure, that would be fairer, as most fans come from beyond Milwaukee County, but realistically, what are the chances? The Green Bay Packers are almost a religion in Wisconsin, yet the team asked only Brown County to contribute to a new stadium (and a referendum there barely passed), because team officials undoubtedly knew other counties would resist. Attempts to tax other counties in the Milwaukee metro area run into the incredible political polarization now raging in Wisconsin, on top of the long-time resistance of suburbanites to any tax support for Milwaukee County venues (the zoo, the art museum, symphony or public museum) that actually draw most of their attendance from beyond Milwaukee County.

Action is Needed by Civic Leaders: In truth, there has been action by civic leaders, as local businesses stepped forward to spend money to support the Bradley Center. There is clear support for a new arena from the Metropolitan Milwaukee Association of Commerce, the media (both the JS and Business Journal) and other civic heavyweights. What is really missing is support from political leaders.

At the recent forum, Assembly Speaker Robin Vos (R-Burlington) said that any call for tax support would need to poll people through a referendum. He surely knows voters would kill the idea. Wisconsin residents voted against a subsidy for the Brewers ballpark and baseball is far more popular than basketball.

So are there any bright spots here, any way to build support for a new arena? Just two that I can see. The Oklahoma solution has gotten many excited because it was part of a broader plan that levied a sales tax for many civic improvements, including a new library, parks upgrades and other civic improvements.

But the difficulty is making it both broad enough to get voters’ support yet not too expensive. Oklahoma’s NBA arena (which began construction in 2002), ultimately cost $191 million; a new arena today is likely to cost $350-$500 million.

The other bright spot is Herb Kohl, a nice guy who is rare among pro sports owners in his willingness to contribute to the arena. That will help sell any deal, but it also creates an ironic strategic problem. The retired U.S. Senator just doesn’t seem to have it in him to threaten to move the team or sell to an out-of-town owner. That‘s admirable, but it removes one of the key ways that sports owners convince a community to show them the money.

21 thoughts on “Murphy’s Law: Myths About a New NBA Arena”