When Julilly Kohler wanted to alert her neighbors of an impending street closure on E. Kane Pl. from April 7th – 11th, she spread the word on Nextdoor.com, a “social network for neighbors” founded in 2010. “Sorry for the inconvenience, but fixing a disintegrated sewer lateral is never fun,” she wrote.  Well, maybe a little bit fun: “P.S. If anyone is curious to see the “guts” of our city streets — by tomorrow, you can look down 18 feet and see everything that is going on — pretty amazing!” 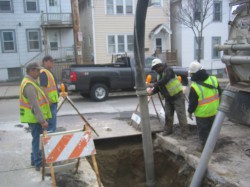 A collapsed sewer lateral caused the partial closure of E. Kane Pl. this week. Neighbors learned of it via Nextdoor.com. Photo by Michael Horne

Neighbor Jenny Clark wrote, “Love the idea of seeing the guts….and so would the students at Tamarack Waldorf School,” who use the nearby Pulaski playground on a daily basis.

Kohler’s post got the attention of Christina Wright, who now works for Nextdoor. Wright wrote to Kohler, saying, “My job is to get more Milwaukeeans to join their neighborhoods’ Nextdoor pages. Our Brady Street Nextdoor neighborhood is really growing and doing well. Your post about the street construction is EXACTLY what Nextdoor is for.”

Nextdoor, based in San Francisco, has a mission “to use the power of technology to build stronger and safer neighborhoods. … Thousands of neighborhoods are already using Nextdoor to build happier, safer places to call home.” The company, which secured $60 million in funding from investors last October, at that point estimated that “more than 22,500 neighborhoods actively use Nextdoor,” or “one-in-seven neighborhoods across the United States,” which represented a 400 percent growth in the previous year. Wright has been hired to help grow its presence in Milwaukee.

“People are using Nextdoor to:

So says the company’s website. Locally, Wright tells me, “A couple of weeks ago a woman in Riverwest found her lost dog thanks to posting about the dog on the Riverwest Nextdoor page. Thanks to the site one of her neighbors — maybe someone she had never met offline — found the dog! A very happy ending.”

Wright and Nextdoor eventually hope to create these kinds of connected neighborhoods throughout the city. As for Brady Street, she says she really wants to get more people on the west side of the street to join Nextdoor. “I am even going door-to-door to get all of our neighbors linked up.”

I answered the challenge, and signed up for the Brady Street West neighborhood. The signup was quick and easy, and also notably secure. The site requires a genuine name, and an actual address, which must be verified. The absence of fake neighbors may be one of the strongest things in its favor. I see for example, that a neighbor of mine who works at City Hall never got around to upholstering a pair of chairs, and they can be mine dirt cheap! But, like the kids of Tamarack School, I’m just slightly more interested in seeing the guts of my city as expressed in its sewers. Field trip to E. Kane Place! 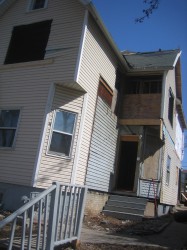 Home in the 1600 block of N. Jackson St. going through a gut rehab. Photo by Michael Horne.

Giovanni Safina has purchased a home in the 1600 block of N. Jackson St., which is the latest example of gut-rehabbing on that Lower East Side street. The home is across the alley from the former Giovanni’s Restaurant of late memory, and will be thoroughly reconstructed “so you won’t be able to recognize it,” the owner of Tutto Restaurant and Bar, 1033 N. Old World Third St. tells Urban Milwaukee. 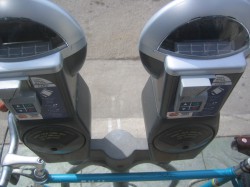 … Down the block at 1501 N. Jackson St. Points East owner Mark Rasmussen said recent remodeling of his tavern unearthed century old newspapers used as insulation in the building. The 1914 papers recounted the anniversary of the sinking of the Titanic, the then recent sinking of the Lusitania and the state of a world going to war at the time. He said there was also an advertisement announcing the offering of a $7 million bond issue by the Milwaukee Gas Company. … Brady Street has been outfitted with clever parking meter retro-fits. The top halves of existing meters were severed, and a new top attached that accepts coins — or plastic. 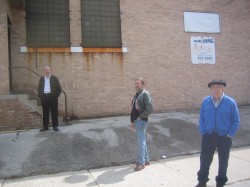 In certain sections of town, when you talk about the “old boys’ club,” people understand you to mean the 1951 building at 1632 N. Franklin Place originally built to house youth activities for neighborhood kids around Brady Street. The building was most recently used as a church and daycare center by Jesus’ Soul Saving Traveling Mission of the Apostolic Faith, which installed an apocalyptic stained glass window on its western facade. The window is gone, and the traveling mission has loaded up the bus and rolled out of the neighborhood, while the building, on its 1-acre site has a new owner, BLC Site LLC. According to Jimmy Picciurro who was waiting with his dad Peter, owner of Pitch’s, to take a tour of the old structure, the building was bought by Patricia A. Cataldo, operator of Jo-Cats bar on E. Brady St. The building may be demolished; it is certainly falling apart on its own account.

Milwaukee philanthropist William Duncan “Bill” Van Dyke III died this week. Van Dyke and his wife Polly were major contributors to numerous local charities, including the Van Dyke Haebler Center for women’s health at Columbia St. Mary’s Hospital. In 2011 the Van Dykes made a $1 million capstone grant to the Milwaukee Symphony Orchestra when that organization came within $1 million of meeting its expenses for the year. At the time of his death, Van Dyke served on the Chairman’s Council and the MSO Endowment and Foundation.

Van Dyke, of Bayside, was a retired broker at Smith Barney, where he was probably also his biggest customer, if not that of the entire office. At the time of his death he was a member of the Board of Regents of the Milwaukee School of Engineering. For many years he served on the board of the $7.5 billion International Flavors and Fragrances, founded by his father-in-law William Haebler. His great-grandfather John H. Van Dyke was a pioneer lawyer and businessman in Milwaukee who served as president of Northwestern Mutual as did his son, Bill Van Dyke’s grandfather and namesake, William D. Van Dyke Sr.

Funeral services will take place over the course of two days at St. Christopher’s Episcopal Church in River Hills. Family will greet friends Friday, April 25th from 3-5 p.m., while memorial services will be held the next day at 1:30 p.m. with private interment to follow at Forest Home Cemetery, where the Van Dykes spend eternity right next door to Alfred Lunt and Lynn Fontanne. The family requests memorials in lieu of flowers to MSOE, the MSO, the Schlitz Audubon Nature Center or the University School of Milwaukee.

Mark Anthony Smukalla, the straight crossdresser who operated “Mark Anthony Presents Treats,” a bar at 2221 N. Humboldt Blvd., died Thursday April 10th, 2014 after failing to recover from a fall. Smukalla, who went by the name Mark Anthony, also had a tattoo business and formerly operated the short-lived Smokey’s bar on N. Dousman Pl., where he lived. At Treats (formerly Tricks) he took a formerly seedy side bar and turned it into an attractive hall with a lovely garden in season. Since 1999, it has been the site of numerous jazz and blues performances, and it has a good pool table. Smukalla was born in 1957. He came to his cross-dressing ways in bits and pieces, evolving from a stylish guy with tattoos into a full-fledged vamp with a stunning and varied wardrobe. News of his passing spread quickly through Riverwest and the Lower East Side where he had many friends.

2 thoughts on “Plenty of Horne: The City’s New “Social Network for Neighbors””