Interior of Academy of Music, 1876

Advertised as the best opera house west of New York, it was indeed an elegant hall. 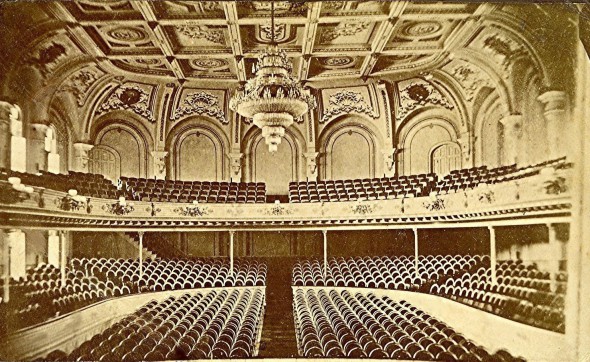 Academy of Music, circa 1876. Photo courtesy of Jeff Beutner.

The previous photograph in this column showed the exterior of the Academy of Music, once located on the west side of Milwaukee between Wisconsin and Michigan. The design was a commission of famed local architect Edward Townsend Mix who designed many of this city’s 19th century landmarks. This is a view of the interior of this music hall, circa 1876, after an extensive interior remodeling that took place in 1872. The photograph is from a carte de visite so the original is small in size. It was used as a promotion at that time as the printing on the back extols the merits of the facility from its “1,600 seat capacity” to the bullish description as “The most elegant and best appointed opera house west of New York.”

Notice the appointments in this photo from the huge crystal chandelier to the elegant gas-lit wall sconces. The décor is decidedly French, a motif that would later appear in Mix’s design for the Mitchell Block, the magnificent building (constructed in 1876) that still stands at the southeast corner of Water and Michigan.

The cartes de visite mentions the manager of the Academy of Music, Harry Deakin. Deakin was formerly the manager at Herman Nunnemacher’s Grand Opera House. The Grand was constructed in 1871 within the Nunnemacher Block. It would not last all that many years, though. It was destroyed in a 1893 fire and be replaced by the Pabst Theater, the building that is so beloved today. The Academy of Music later became the Shubert Theater and lasted well into the 20th century.

One thought on “Yesterday’s Milwaukee: Interior of Academy of Music, 1876”