Three of the four buildings in the RowHouse 31 project on Humboldt Ave are nearly finished.

A complex of apartment buildings is heading towards completion on N. Humboldt Ave. in Riverwest. The complex is squarely situated between existing apartment buildings, but is quite a design departure for the neighborhood, using none of the brick that defines the adjacent buildings.

RowHouse 31 features, you guessed it, 31 row houses. Unlike many other rowhouse-style apartments and condominiums built in the past 10 years, the buildings don’t face the street. Because of the depth of the lot, the rowhouses all face inward (perpendicular to the street). Two driveways are under construction on the north and south side of the lot, which will prevent any sight of a garage from the interior of the complex.

As my colleague Dave Reid previously reported “each 3-story 2-bedroom home will be approximately 1,500 square feet, with 2.5 bathrooms, and a 2-car garage. The units will feature such amenities as hardwood floors, granite counters, stainless steel appliances, central air, in-unit washer and dryers, and, of course, a front yard available for gardening. The rents will range between $1,500-$1,600/month.”

The development was originally expected to be finished in early 2014, but the bitterly cold winter likely played a part in delaying this. Three of the four buildings appear to be near completion (one looks like it’s completed), but the fourth building is merely a poured foundation at this point.

The complex is under development by Tim Gokhman and Ann Shuk of ATF 1, LLC. The project’s architect is Scott Kindness. We previously photographed the site in July of 2013. 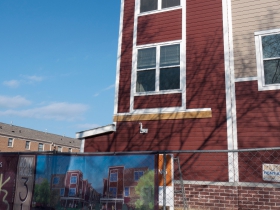 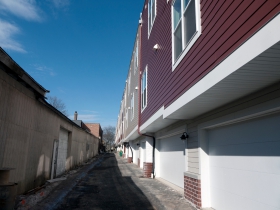 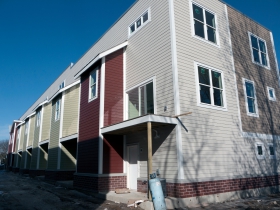 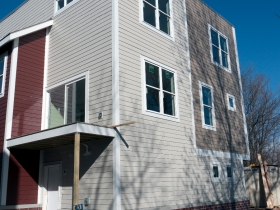 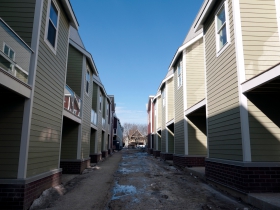 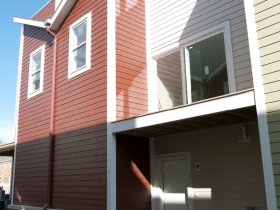