By Bill Lueders, Wisconsin Center for Investigative Journalism - Mar 4th, 2014 03:38 pm
Get a daily rundown of the top stories on Urban Milwaukee 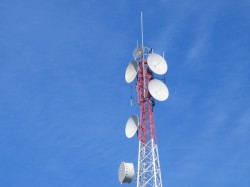 It was the perfect piece of land for their dream home. Fifty acres in the town of Rutland, in rural Dane County, a few miles south of Madison. Jessica Polakowski and her husband, Nicholas, closed the deal on Sept. 7, 2010.

Later that same day, Jessica recalls, the couple learned that Magnum Communications, a Tomah-based broadcast company, wanted to erect a nearly 500-foot radio tower on an adjacent plot. The application was filed in November 2010.

The Polakowskis were stunned. The tower would be almost twice as tall as the state Capitol, visible for miles. There would be blinking lights and guy wires — even the possibility of collapse, as happened with a broadcast tower in Eau Claire.

Town and county approval was required, and the couple joined other foes at public hearings. “Quite a crowd turned out for these,” Jessica says.

There was also support, from officials in communities that would be served by the tower, including the cities of Stoughton and Verona. But it wasn’t enough.

In 2011, the town rejected the application and the Dane County Board followed suit. Among other things, the town deemed that the tower would have a negative impact on the uses, value and enjoyment of nearby property.

The Polakowskis proceeded to build their dream house — the property and home now have an assessed value of more than $450,000 — but the battle was not over. Magnum sued the town and county, seeking to overturn the denial.

Last September, Dane County Judge William Foust ruled that local officials were within their rights to reject the application.

“As I read the record, the board and the people of the town of Rutland said, it’s too big, it’s too ugly, it’s going to hurt our property values, and we don’t want that here in this rural area of southern Dane County,” Foust said in his ruling.

On Feb. 20, Magnum Communications submitted a new application for a 486-foot tower in the same location. That’s two feet shorter than before, and the structure may contain fewer lights. But the proposal is essentially the same.

The difference is that, this time, it stands a much better chance.

That’s because a provision passed in last year’s state budget bill greatly restricts the ability of local communities in Wisconsin to reject broadcast towers. Any denial must now be based solely on public health or safety concerns, backed with “substantial written evidence.”

Reflects town of Rutland chairman Dale Beske, “The rules of the game are changed after the game is over and you have to replay the game.”

Drafting records tie this new provision, and one making it harder for local governments to spurn cell phone towers, to state Rep. John Klenke, R-Green Bay. Klenke did not respond to requests for comment.

Bill White, an attorney for Michael Best & Friedrich, which has represented Magnum on the Rutland tower, acknowledges the company’s involvement in the legislative process: “We tried to make sure that the concerns and benefits of broadcast media were known to the Legislature.”

While not predicting an automatic win, White says the budget provision “does make a difference in terms of the approval process.” He thinks the change makes sense because radio towers serve the public interest, as part of a broadcast network used during weather and other emergencies. Hence the support for the Rutland tower from places like Stoughton.

But Polakowski disputes there’s any unmet public safety need the tower would fill, adding, “If the city of Stoughton feels there’s a need for a radio tower, there’s plenty of land in Stoughton.”