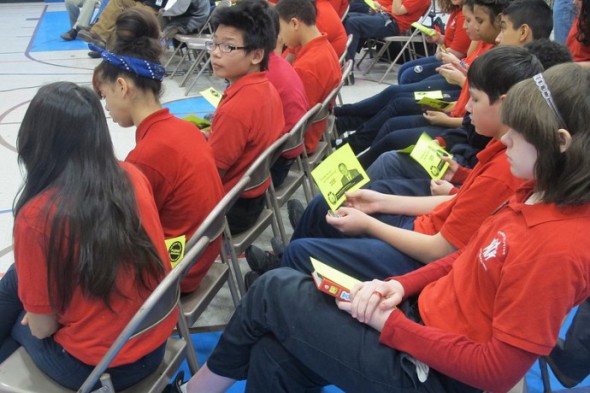 Students from Christ-St. Peter Lutheran School were among the first to receive pledge cards. (Photo by Edgar Mendez)

Alderman Bob Donovan, who represents a district on the South Side, is encouraging residents to commit to fighting violence and other crime in the city by making a pledge.

The “I Pledge Milwaukee” initiative, part of an eight-point plan to increase public safety, was recently introduced by Donovan and other state and local leaders.

The pledge initiative is loosely based on a similar program in Philadelphia, according to Donovan. The goal is to encourage residents to pledge action, time, money or other commitments to their neighborhoods. Their contributions might be through clean-ups, keeping an eye out for crime, volunteering at a local non-profit or other community engagement. 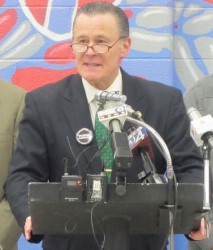 Alderman Bob Donovan said the “I Pledge Milwaukee” campaign recognizes that the power of the city lies in its people. (Photo by Edgar Mendez)

“Do what you can; start where you’re at,” Donovan said.

Students from Christ-St. Peter Lutheran School, 2229 W. Greenfield Ave., were among the first to sign a version of the pledge designed for students, which does not include personal information such as phone number or email address.

Other strategies to improve public safety include adding 250 more police officers, expanding the use of “shotspotter” technology and strengthening community prosecution units.

The initiative is still in the planning phase, but pledge forms soliciting a name, address, email and phone number, along with a specific pledge, will be distributed throughout the city. Donovan said one idea is to link up citizens who have common ideals.

“I want to bring together people who are working on similar commitments, like those who pledge to be block watch captains,” Donovan said.

Bonnie Constantine and her husband Darwin, who’ve lived on the South Side for 30 years, said the initiative is long overdue.

“It gives us a way to do something other than just complain about problems in the neighborhood,” Bonnie said.

Emilio Lopez, retired former associate executive director of the Milwaukee Christian Center, knows that getting people to participate is an uphill challenge. Lopez, who’s part of the committee planning the initiative, said some people are afraid and others just don’t want to bother with it.

Still, Lopez said that increasing the number of people who volunteer in their community by 5 or 10 percent would greatly improve public safety.

“What we’re trying to do is to create an avenue for residents to get involved; we can’t battle crime unless the community buys in,” Lopez said.

Natasha Vega, who lives in Clarke Square, said she cares about crime, but won’t sign a pledge card. Vega said she doesn’t feel comfortable sharing her personal information, not knowing exactly how that information will be used.

“I’m not giving my address and phone number; why does anybody need that?” asked Vega.

Donovan said a website for the initiative will likely be created and data collected from pledges will eventually be compiled, though figuring what to do with that information is still being worked out.

“A steering committee is being put in place to address those issues, but we’re looking for input from anyone who’s interested,” Donovan said.

As of now, the Milwaukee Police Department is not a partner in the pledge initiative, though that could change in the future, according to Donovan.

John Hefter, who lives in Layton Park, was not worried about sharing his information. Though he said he generally feels safe in his community, he said it could be improved if more people get involved. Hefter pledged to attend more community meetings and meet more people in his neighborhood.

“If we know who our neighbors are, then together we can confront crime and other issues in our neighborhood,” he added.

One thought on “Help Me Fight Crime, Says Bob Donovan”