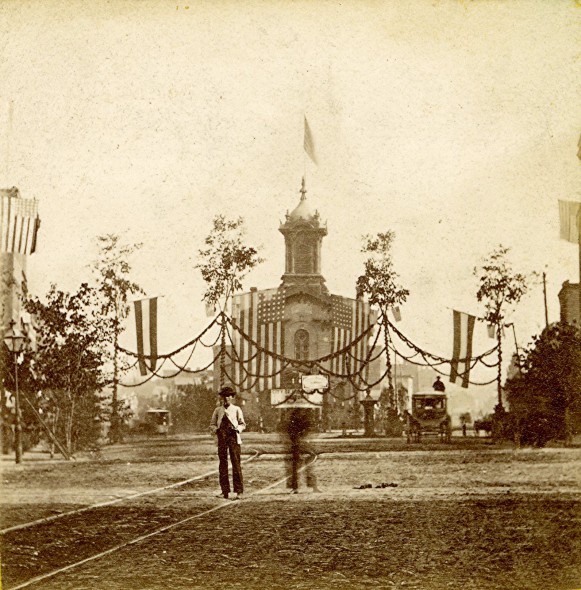 Saengerfest, with City Hall in the background. Photo courtesy of Jeff Beutner.

In June 2013 the National Saengerfest was held in Milwaukee. This is an annual gathering of Austrian and German musical societies. The history of Saengerfest, however, goes back many years in the United States. As Milwaukee in the 19th century had a substantial population of German origin it should be of little surprise that Milwaukee’s first Saengerfest was held here in 1868. The building in this photograph is City Hall and the streets are amply decorated to welcome the singers. The garlands would decorate the streets all the way to Union Depot, the city’s main railroad station at that time, which was located on south 2nd St. near Seeboth St.

Note the tracks in the street. This was for the trolley which was horse-drawn. Electric trollies would not appear until 1890.

City Hall was originally a market hall that in 1860 was remodeled and converted into City Hall by architect Edward Townsend Mix, and served the city’s seat of government until 1871. (After this the city government was housed in various locations.)  This building appears in many early stereoviews beginning in the 1860s. The current City Hall, built in 1895, is on this same site.