A "stereoview" by famed photographer H.H. Bennett captures Water Street in the 1870s or 1880s. 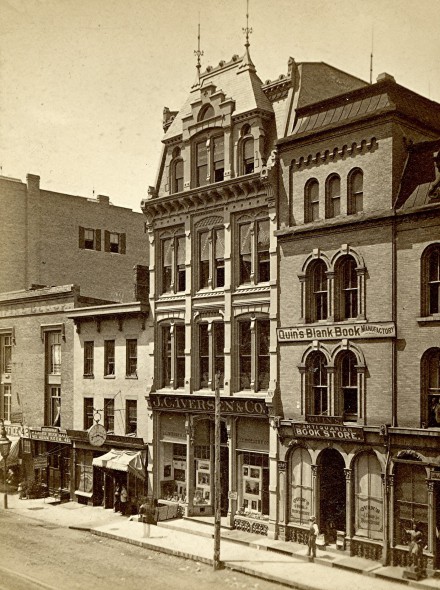 The vast majority of stereoviews of Milwaukee were produced in the 1870s and the 1880s. For those unfamiliar with the term, a stereo was a pair of photographs taken by a special camera so that when mounted on a board and viewed through a stereopticon an illusion of a 3-D effect was created. Nationally these viewers remained popular for home entertainment through World War I, before being supplanted by such new media as radio and movies. It was not unlike the fate of VHS and Betamax in more recent decades.

The two most prolific producers of Milwaukee stereoviews were W.H. Sherman and H.H. Bennett. Sherman had his own studio and store located next to the Newhall House hotel. Bennett lived farther away in the town of Kilbourn, WI, the earlier name of what is now Wisconsin Dells. His most famous views are of the dells rock formations and river views. His shop and studio actually were still operated by his descendants until a few years ago. Now it is a museum operated by the State Historical Society of Wisconsin.

In Milwaukee Bennett needed a retail outlet as he ultimately would produce over 200 views of the city during the period of mid 1870s to the late 1880s. His retail outlet was the J.C. Iversen & Co store located at 425 and 427 East Water St. East Water is today’s Water St. and the store, as seen in this photograph, was located on the west side of Water St., just south of Mason St. Bennett’s Milwaukee views were very different from the naturalistic photography of the dells and his best views of Milwaukee are highly prized today. Expect to see many of them here in the future.

Today the location is occupied by the Daniel Burnham designed City Center at 735 (previously known as the First Wisconsin National Bank building).