A social service worker, clown and nail salon owner, she has also helped guide Walker’s Point Center for the Arts. 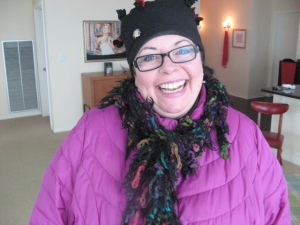 Lona Long Velasco, 53, was a South Side girl who eventually expanded her horizons but never left the neighborhood where she grew up. Her parents met in Milwaukee, where her mom, Mary Kay Kirkland, allegedly cat-called her future husband, John Pomphet Long 1V, a Marine, all the way down Wisconsin Avenue. She must have liked men in uniform, as she and her girl friends often skipped school at South Division High, in order to drive to the Great Lakes Naval Station and ogle the guys.

An accident with the family car may have changed the course of Lona’s young life. She was unharmed though she was riding in a laundry basket in the back seat of the car, but the accident left her mother badly scarred. Her parents divorced a few years later, and her maternal grandma took in Lona and her mother.

Grandma had a duplex on 3rd and Washington and she ran a tavern on 1st St. and later owned Paula’s Tap on 25th and Scott, in the neighborhood then called “Clark’s Addition.” Paula’s closed in the late 1980s, and grandma died this past June, leaving a bequest of $50,000 to the Milwaukee Police Department, earmarking it specifically for the purchase of a squad car and two bullet proof vests.

Holy Trinity’s Head Start Program was Lona’s first school experience. Later, she was a K-2 kid at nearby Vieux and later still she, too, attended South Division. She eventually earned a Masters in Library and Information Studies (MLIS) at UW-Milwaukee. Her degree took her to South Africa, as part of an MLIS research team which sought to better understand the AIDS pandemic. The professors who traveled with her knew that she promoted literacy as a clowning named “Laffy Lona.” At a stop at a children’s orphanage in Mamelodi, South Africa (a black township), she entertained the children by painting their faces and reading Circus, a book by Milwaukee artist/illustrator, Lois Ehlert. 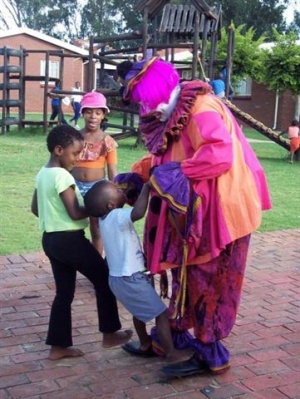 Velasco went on to have a successful career in social service. For years she worked for Alternatives in Psychological Consultation, S.C., an agency on the northwest side, where she served as a Family Support Provider.  “I specialized in parent aid services, home management services, tutoring and mentoring youth,” she notes.

Meanwhile, she had opened a small nail salon business on Oakland Avenue in Shorewood, called Oakland Glow Salon, open Saturdays only, which she has run for more than 20 years. “I have a wonderful clientele,” she says.

Last year, she hired by Children’s Hospital of Wisconsin Community Services, where she works as a Community Engagement Specialist, handing a broad range of duties: volunteer services coordination, mentoring youth aging out of foster care and helping connect clients to community resources with an emphasis on housing and employment.

But she never left the South Side. Lona’s current home, shared with her husband, is a modest 1,250 square foot Victorian cottage on the north side of Walker’s Square Park, six blocks from Walker’s Point Center for the Arts (WPCA) at 5th & Walker. Volunteerism is in her blood, and she has devoted many hours to helping children in the center’s “Hand’s On” after-school program. She also became a member of the center’s board.

One problem with the building on 9th and National (known as the Burnham Building, where the developer of Milwaukee’s famed cream city bricks had a hunting lodge), was that the children were relegated to art classes in the dark damp basement. As a board member Lona pushed to move the Hand’s On program to the first floor.

It was step one, followed by a strategic plan to acquire a more suitable space — one it could own rather than rent — for the center.  The search began. In 2009, Lona located what she thought was the perfect building on the corner of 5th and Walker. In came an architect to announce it would take at least a half-million to restore the structure that housed La Causa Day Care Center. The board resisted; Lona persisted.

As a long time resident of Walker’s Point, she was familiar with the history of the La Causa building, and knew it had been beautifully preserved by the (then) Walker’s Point Development Corporation. It had a stellar second floor space in move-in condition that would be perfect for the Hands On program. And unlike the damp dark basement, it had plenty of light.

But the board’s Facilities Committee continued to resist. The building’s owner rejected or ignored the offers to purchase, until bingo!, he said yes and a deal was signed. When WPCA was reborn, the generous windows fronting 5th let the light stream in. It sits on a great corner lot with adequate parking on a block south of National Avenue, a block that is looking good. The volunteers who arrived in droves to move walls and make the old building new again, were inspired by what they could do for their community and the children living in that community.

There are lots of old buildings filled with non-profits. Some succeed; others fail. WPCA’s current space was built on a solid foundation, both literally and figuratively. It’s volunteerism at its best, and the many partners who continue to fund the space know a good bet when they see it.

Planning ahead seems to have been the glue that kept WPCA intact, and Lona Long Velasco has spearheaded much of it. The group has also had excellent leadership from its longtime Executive Director, Gary Tuma. On January 1, 2014, he was succeeded by Kate Bradley, who previously served as the center’s Educational Coordinator.

Meanwhile, Velasco was reelected the board president, as position she had held for six years. The little girl who rode in a laundry basket in the backseat of a car has come a long way, as has the Walker’s Point Center for the Arts.