This building, which still stands on the corner of Mason St. and Water St., may be Downtown's oldest commercial building. 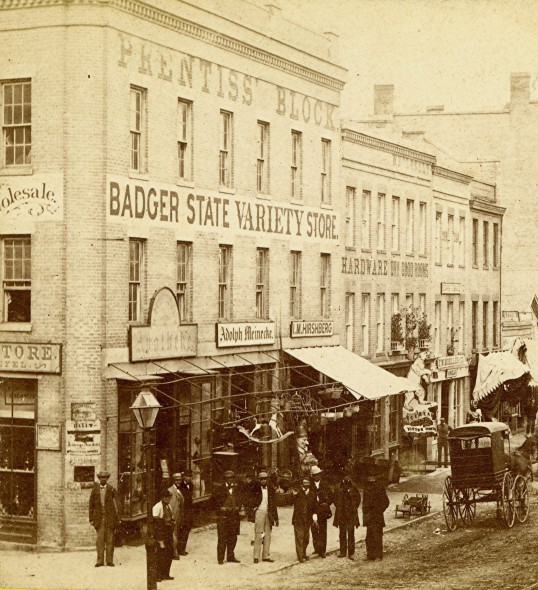 There is much of interest in this late 1860s downtown Milwaukee photograph. The most obvious is the signage of the Badger State Variety Store. The owner was Adolph Meinecke who would relocate to larger quarters before 1870. Then look to the right and you will find a sign with a polar bear. The bear is holding a beer stein and the business is named the Ice Bear Saloon, run by the proprietor Victor Schuette.

But of most historical interest is the words “Prentiss Block” at the top of the Meinecke store building. William Prentiss was one of the very earliest Milwaukee settlers, a Yankee who arrived in 1836 from Vermont. At this time he considered himself an attorney, but he also held several positions in local government: he served as justice of peace, chairman of Milwaukee Board of County Commissioners, as a member of the first Board of Trustees of the Village of Milwaukee, in the Wisconsin State Assembly and on the Milwaukee Common Council. Most notably, Prentiss served for one year as mayor of Milwaukee from 1858 to 1859.

Also interesting is the architectural style of the corner building. This is the Federal style which predominated here in the 1840s. But by the early 1850s it was replaced by the Italianate style of which many more Cream City brick buildings survive. By the way, this structure still stands at the northwest corner of Mason and Water St. It has been altered several times over the years, but this very likely is the oldest surviving commercial building in the heart of downtown. It now houses Bruegger’s Bagels, at 753 N. Water St.