By Natalie Wickman, Milwaukee Neighborhood News Service - Feb 3rd, 2014 11:00 am
Get a daily rundown of the top stories on Urban Milwaukee 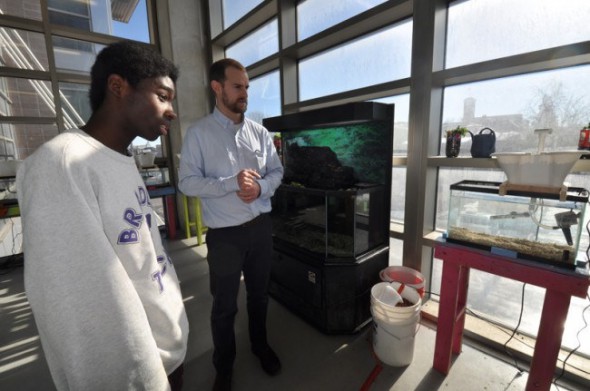 The Milwaukee Public School system will expand its aquaponics program after receiving a grant of $98,000 from AT&T and the National Education Association (NEA) Foundation.

The grant, presented at Bradley Technology and Trade High School, will add an aquaponics course at five MPS schools, which have yet to be selected. The courses will be added over the next two years.

Aquaponics is a form of farming in which crops and fish grow together in a recirculating system. Growing Power, the Milwaukee-based pioneer in aquaponics, uses tilapia and yellow perch to fertilize a variety of crops and herbs using the system.

An earlier grant from AT&T and the NEA Foundation put aquaponics curricula in 13 MPS schools. 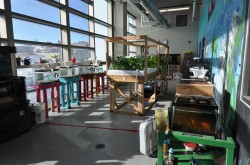 Jessica Erickson, director of public affairs at AT&T Wisconsin, said the company chose to fund aquaponics because it falls under the (STEM) fields, which she thinks will dominate future job opportunities.

“We are committed to education of our young people, particularly in the critical fields of STEM education,” Erickson said. “The reason why we as a company support STEM education is because we know how important a strong foundation in STEM education is for preparing our students for careers in the 21st century.”

Rochelle Sandrin, an aquaponics sustainability teacher at Bradley Tech, said her class is based on hands-on and project work, which students often find more exciting than a traditional science class.

“(Student spend) time learning about food needs and food deserts and how that can impact health and lifestyle,” Sandrin said. “Then we learn about urban agriculture, urban farming and the components of aquaponics before students construct and run their own (aquaponics) systems.”

Before teachers can teach the aquaponics class, they must go through training that involves both hands-on elements and reading.

Odell Chalmers, a student in the Bradley Tech aquaponics class, will be minoring in aquaponics when he attends University of Wisconsin, Stevens Point in the fall.

“My favorite part of aquaponics class is working with students who don’t understand it,” Chalmers said. “I was able to meet kids who I didn’t even know went to my school.”

“It’s really nice to see students depending on one another to help each other learn instead of just waiting for the instructors to tell them the answer,” Sandrin said. “(We’re) increasing interest in kids who always thought science was hard or boring.”

Added Erickson, “Technology (will) be the driving force of our new economy and we know that STEM education is really vital to preparing the next generation of workers.”