Betting on the Common Council

Haven't got your fix with the Super Bowl? Gamble with friends on who will be the next council president. 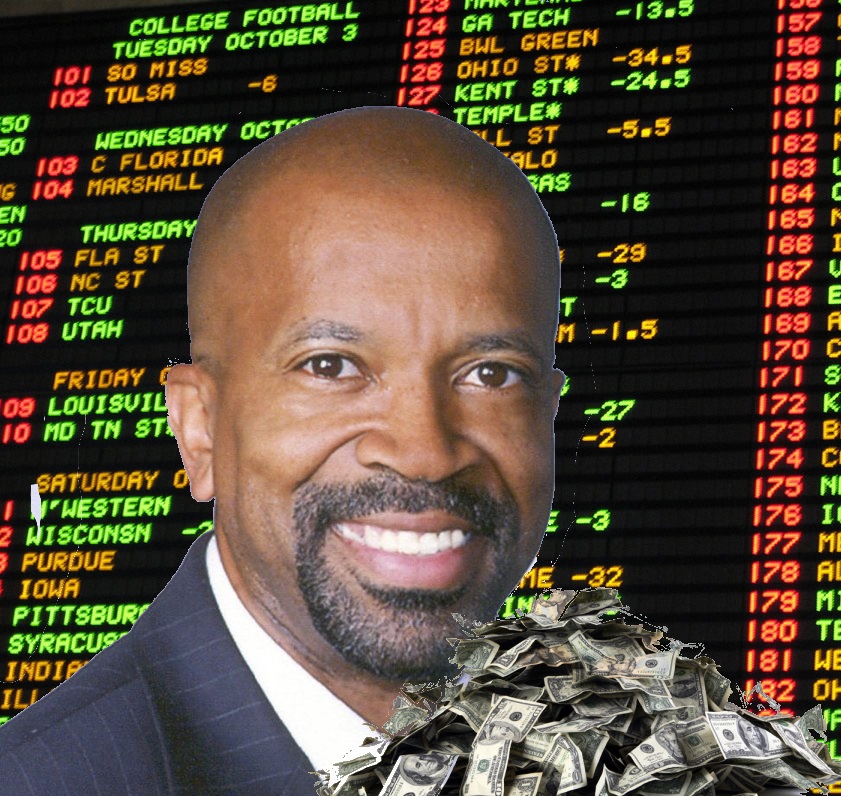 Willie Hines at a sports book

What if you could bet on the identity of the next Common Council President, just like you can on the color of Gatorade dumped on the winning coach at the Super Bowl? In the wake of Willie Hines, Jr‘s surprise resignation (and acceptance of a city job that pays ~$40,000 more),  it’s time to place your bets on who the next president will be. Urban Milwaukee is playing oddsmaker for everyone that couldn’t get their fix betting on the length of the national anthem (take the under) or which sideline reporter will be shown first after half-time (go with Erin Andrews).

Michael Murphy – The odds-on favorite to win. Murphy chairs the powerful Finance Committee and is the longest serving alderman. He currently sits the furthest away from the gavel during council meetings, so moving to the front would be a big change for him. This is the safe bet, and likewise it’s the expensive one. Working against Murphy is the question of why hasn’t he been president before.  He’s been the longest-serving alderman for years, and is known for his fiscal prudence. Final odds: -300

Ashanti Hamilton – An up-and-comer that’s only been on the council since 2004. Hamilton chairs the Judiciary and Legislation Committee. In addition he’s president of the Milwaukee Public Library Board. Hamilton is quiet at times, but on those occasions when he’s not, is a gifted public speaker. Hamilton represents the near North Side. Seemingly out-of-character, he was charged with felony child abuse in 2009, but this was dropped by the prosecutor’s motion. The two most-recent Common Council presidents were black (Hines, Pratt), as is Hamilton, but I’ve very rarely seen the alderman vote based on their racial identities. Final odds: +150

Willie Wade – He would be an interesting choice for president, but it’s unclear if he even wants the job. His only chairmanship is of the Fresh Coast Basketball Classic (which doesn’t get you on committee made up of committee heads, Steering & Rules), but he’s involved in a lot of other committees. He’s vice chair of Zoning, Neighborhoods & Development, and sits on the Public Works and Community & Economic Development committees. He’s also an appointee to the both the Milwaukee sewerage district (MMSD) and the redevelopment authority (RACM). In brief, he’s got his fingers in basketball, the deep tunnel, zoning, bonding for land sales and public works infrastructure. The Century City corridor (30th Street/Tower Automotive) sits in his district, and he’s very publicly involved in it. He’s also a Milwaukee Bucks season ticket holder and recently stated during a Public Works meeting that he doesn’t drink. He’s on the board of LISC and the Milwaukee Area Workforce Investment Board. He also has a strange refusal to remove a baseball cap to add to his record. Willie Wade is your wildcard bet for council president. Final odds: +300

Robert Bauman – Unquestionably the best council member at utilizing parlimentary manuevers to achieve his goals. Bauman delayed the demolition of the Sydney HIH by a month by using a little-used statutory provision. He’s also leveraged a “paper alley” on that same lot to gain leverage over a controversial development proposal. Bauman, in short, is the alderman most likely to tactically twist and turn his way to the presidency. And he would need to use that approach, because he’s unlikely to win the presidency on a straight-up popularity contest. While respected by colleagues, his principled stands can wear on them. Even if he doesn’t get the nod, Bauman will continue to have a lot of influence due to his district (including Downtown) and his legal accumen. Final odds: +350

Terry Witkowski – If you think nice guys can finish first, Witkowski is your man. The South Side alderman, who represents the airport and areas nearby, rarely ruffles anyone’s feathers. On behalf of Mayor Tom Barrett, he successfully led the revision of the city’s historic-preservation ordinances. Witkowski is always good for promotion of the city’s image, be it proposing cab drivers wear uniforms, promoting a historical preservation plaque program, or forming a task force to focus on Milwaukee’s brand. Witkowski was given chairmanship of the Public Safety Committee following Hines removal of Donovan after the last election. I’m sure the Mayor would be pleased to see Witkowski become president. Final odds: +400

Tony Zielinski – The Bay View alderman is very ambitious, so don’t count against him making a run. Zielinski jumped from part-time county supervisor (and law school student) to alderman in 2004. He ran for Lieutenant Governor in 2010, and rumor has it he would love to run for congresswoman Gwen Moore‘s seat if she retires. He currently chairs the grueling Licenses Committee, which is known for long and contentious meetings. He has at best an outside shot to become council president, perhaps through some weird horse trading with council members (remember the president appoints committee chairs). Final odds: +500

Nik Kovac – The East Side (and Riverwest) alderman is unlikely to be the next council prez, but quite likely to be a key swing vote in deciding the winner (2/1 odds on that). Kovac is the vice chair of the Finance Committee, which front-runner Michael Murphy chairs. If he votes for Murphy, Kovac becomes Finance Committee chair and puts that Harvard math degree to good use. On the flip side, Kovac is friends with Hamilton. He could vote for Hamilton and get to leave Licenses Committee and end up on a more desirable committee. That choice could decide the presidency.  Still, you can’t completely rule him out as a candidate, given how Kovac won election to his district through sheer force of will. By the end of that campaign, he had out-smarted and out-worked his opponents. Will that happen here? Final odds: +600

Milele Coggs – Coggs stands out on the council for at least two reasons, she’s the only female and is a member of the politically powerful Coggs family. Unfortunately, in the  race for council president, both of those distinctions bring with them a voting block of only one. Coggs is still new to the Common Council (2008) and will likely be around a long-time, so this won’t be her only chance. Final odds: +800

Joe Davis, Sr. – The other former county supervisor turned alderman (with Zielinski). As long as Davis is able to continue his travel with the Sister Cities initiative, he’ll back who gets him there. He chairs the Economic & Community Development Committee, but I just can’t see him emerging as a likely Common Council president. Final odds: +800

Joe Dudzik – Dudzik isn’t a power broker among alderman, perhaps having flown too close to Ald. Robert Donovan during the last cycle, but he’s more lately drawn some distance between him and his controversial colleague. Dudzik probably wants off of Licenses Committee, where he was banished to in 2012, losing his vice-chairmanship of Public Works. Consider him a swing vote. Final odds: +1,000

Robert Puente – The quietest of Common Council members. Rarely issues press releases and infrequently speaks during committee and full council meetings. He seems content to stay where he is, drawing a police pension and alderman’s salary while earning towards a city pension as an alderman (Witkowski does this as well, but Puente makes ~$14,000 more a year due to his higher pay as a captain in MPD). Final odds: +1,500

Jose Perez – The rookie on the Common Council. He’s not going to end up president and his vote is probably one of the easier ones to court. Final odds: +2,000

Jim Bohl – An investigation dogs the head of the powerful Zoning, Neighborhoods & Development Committee. If not for that his odds would be a lot better. Unless there’s a surprise clearing of his name prior to February 11th, he’s a long shot. For those who like the underdog, here’s your play. Final odds: +2,500

Robert Donovan – Outgoing president Willie Hines rarely issued press releases. Donovan is famous for his unending stream of releases, often making declarations that leave him at odds with his fellow aldermen. In a pure popularity contest among colleagues, he’d probably finish last. Very likely to back someone that would give him his Public Safety chairmanship back, so he can sound off on the issue of crime. Final odds: +5,000

More Votes Needed Than Milwaukee County Board to pick President – The county supervisors needed to take 24 votes before electing Marina Dimitrijevic as board chair.  Will the Common Council need more, or is the County Board uniquely fractured? Going against the Common Council is that the resignation of Hines leaves only 14 voters. Final odds: +500

Total Votes Needed – How many times will the Common Council need to vote to elect their next member? Final odds: Over/Under 2.5

Next 15th District Representative – Russell Stamper, II: In the race to replace Hines as alderman, Stamper is our first choice. He’s a current freshman on the Milwaukee County Board and his dad is a judge. Final odds: -150

Next 15th District Representative – Eyon Biddle, Sr. – The former supervisor that left after his first term to attempt to run against Hines. Following a loss in 2012, he’s basically disappeared from the public eye aside from a pretty active Twitter account. His wife Corry Joe Biddle runs young professional group FUEL Milwaukee out of the offices of the MMAC. Final odds: +150

Next 15th District Representative – Deshea Aree – Word is circulating that he’s in. He works in the Department of City Development currently, and would be the second DCD employee to end up on the Common Council if he wins (Perez was the first). Final odds: +500

New Committee Chairs – The new Common Council president will become the chair of the Steering & Rules Committee. It’s also likely that a current chair would win the presidency and vacate their current committee assignments. That’s two new chairs for sure. Will there be one more? Final odds: Over/Under 2.5

7 thoughts on “Eyes on Milwaukee: Betting on the Common Council”