The plague of drunk driving threatens all of us, but legislators won't toughen the laws.

By Dave Schlabowske, Bike Federation of Wisconsin - Jan 31st, 2014 10:51 am
Get a daily rundown of the top stories on Urban Milwaukee 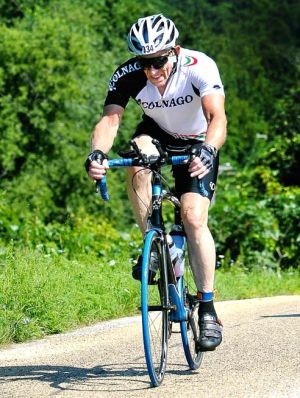 Tom Held reported in The Active Pursuit that Krista Holler, 28, is looking at 40 years in jail for killing 71-year-old Chippewa area dentist Robert Tschabrun last June 1st.  Tschabrun, 71, and an avid cyclist, was wearing bright bicycle clothing and a helmet, and his bicycle lights continued to flash even after his death, according to reports from the Chippewa County sheriff’s deputy who found Tschabrun’s dead body in a ditch off of Highway G, north of the crashed vehicle.

According to court records, this was Holler’s third conviction for operating a motor vehicle while under the influence, but she has an even more extensive record of speeding, inattentive driving, driving with a suspended license, driving without insurance, and more.

I’m all for giving someone a chance after they make a mistake, but why do we, as a society, allow people to keep driving after they have repeatedly proven to be a danger when behind the wheel? 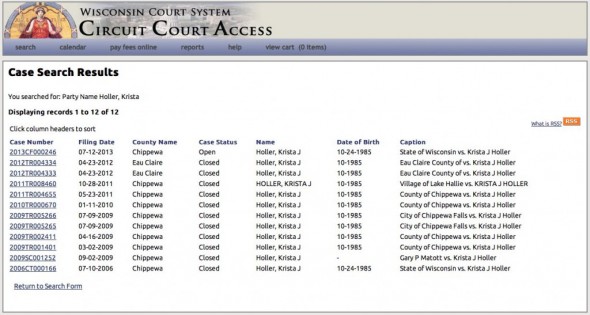 Krista Holler’s rap sheet. Why do we allow people like this to keep driving?

Beyond the fact that Holler is a repeat offender, the depressing details about the tragedy revealed in media reports in the Chippewa Leader Telegram leave me shaking my head. According to that report, witnesses told police that Holler was at a bonfire at a tavern where she consumed nine or 10 drinks between 2:30 a.m. and 5:15 a.m. before leaving. After striking Tschabrun, she called a friend at the tavern asking to be brought back to the bonfire to keep drinking! She sent a text message to her mother at 5:58 a.m. stating “I just hit a deer with Grandma’s car.”

Sadly, Holler is only one example of an epidemic problem. The crazy case in Manitowoc, where a driver hit a man delivering papers by bike and kept driving, hit another car even though the person went through his windshield and ended up in the front seat is another recent example. Not enough? What about Leanna Norton, 23 of DeForest, who has been pulled over 28 times for driving without a license in just four years. I remember watching a local news story in which they video taped people who had just had their license suspended, walk out of court in Waukesha, get into their car and drive away.

It wouldn’t be hard to stop that sort of behavior. Put an officer out in the parking lot. Ask people to show a driver’s license before they can drive away. Want to reduce drunk driving? Change the law so we can set up sobriety check-points; they work in other states. Have someone who repeatedly drives without a license? Take away or boot their car. If they get caught in another car, boot that one too.

These scofflaws behind the wheel have been causing murder and mayhem on our roads for far too long, but we don’t have anyone to blame but ourselves. We live in a society where we elect people to pass laws for us. When we care enough about something as a society, our elected leaders either do something about it or they don’t get re-elected.

Changing these lax laws is harder than it seems, because any such change comes with a cost. Just ask Rep. Jim Ott (R-Mequon) who has tried to pass legislation to toughen our drunk driving laws several times without success. What always kills the bills is the cost of locking up the drunks. This could become a campaign issue for our next State Attorney General.

Most regular readers know that the Bike Fed has recently made progress getting a Vulnerable User Law adopted, but to address the problem when an inattentive driver kills someone, but the District Attorney cannot prove criminal negligence. Hopefully that will pass soon, and it will fill an important gap between a traffic ticket and vehicular homicide, but it does not address the bigger problem of keeping people who cannot be trusted to drive from getting behind the wheel.