Contractor chosen would save taxpayers $15 million a year. So why the delay? 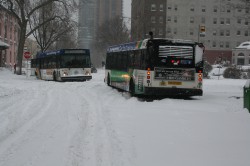 These buses are as stuck as the current bidding process appears to be to manage MCTS. Photo by Jeramey Jannene.

Some day, we can only hope, the county will solve the issue of who will run its buses.

Back in July, Milwaukee County Executive Chris Abele announced the results of a bidding process to run the system, awarding the contract to MV Transportation, based in Dallas. That was six months ago and the contract remains tied up in delays by the county board and legal challenges by companies who lost the bid.

If you’re a taxpayer or a bus rider, it’s frustrating. The system has been declining for years.  Buses on the street have dropped from 560 or so in 2001 to about 400 today, and service decreased 20 percent while fares increased 50 percent during that same period. The state has slashed its funding for this by some $14 million over the last two budgets and the county made up the difference with federal funding, but that funding has now been eliminated.

Meanwhile the system has been run by the same nonprofit company, Milwaukee Transport Services, Inc. (MTS) for nearly 40 years. Since at least 2011, county supervisors have expressed frustration over the failure of MTS to modernize the system with improvements like paper-less transfers.  In 2012, numerous supervisors voiced complaints, with Jason Haas imploring the company to “please try harder” to get this done in less than two years, adding “if this was a business plan, the two-year wait would be unacceptable.” 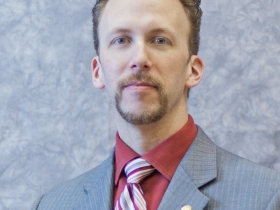 Supervisor Mark Borkowski railed about the “tortoise-like pace” of MTS while Supervisor Theo Lipscomb complained, “It would seem that we could have purchased a system already in use that could be replicated here far more easily than creating a new system and I think that’s why it’s taken up three or four years here.”

Then suddenly, just a few months after MTS lost the bid to run the bus system, it announced  it was “taking transit to the next level” by adding an “Electronic Fare System” (ending the paper transfers), “Real Time Information” (informing riders where on the route the bus is at all times) and “Bus Stop Annunciators” (electronic signs and audio announcements of upcoming stops on all buses). In fact, it has only begun this changeover; this was mostly another promise to eventually incorporate these changes on all buses, a promise that goes back years.

MTS had also had problems running the county’s paratransit system (which provides rides for the disabled and elderly) which cost county taxpayers $8 million in added costs. The company admitted the screw-up in its application to the county during the recent RFP process: “There is no disputing the fact that the 2012 procurement [for paratransit] could and should have been handled more effectively,” it conceded.

The award to MV immediately created controversy, which was soon driven by two of the losing bidders, MTS and Veolia Transportation, who filed legal appeals challenging the decision. They argued that MV low-balled its administrative costs: it promised to spend $8.6 million per year versus $23.9 million for MTS and $29.4 million for Veolia.

MV’s bid meant its administrative costs would amount to about 4 percent of overall costs, versus the 14 percent now being spent by MTS and the 18 percent average for 14 similar-sized systems nationally, MTS claimed in its appeal.

MV spokesperson Nikki Frenney emailed this response to me: “What the competitors fail to mention is that MV and another national transportation contractor BOTH priced much lower than the others. Today, competitively procured government contracts go to the lowest responsible bidder more than 90 percent of the time. MV has proven that our pricing is sound when competing against other transportation firms.” She claims the company has saved Orange County, California more than $40 million on a contract it won from Veolia.

The complaints by MTS and Veolia have generated considerable press coverage, including two different stories by the Shepherd Express assailing Abele for allegedly corrupting the RFP process. While board members have mostly said nothing, the feelings of many may have been expressed by Lipscomb, who told me that “the process may have been tainted in some way” and that Abele seemed to have “a distinct preference for a different business model than MTS.”

Even if Abele did cleverly bend all these people to his will, no one has provided any evidence he has an animus against Veolia or any other of the bidders, other than MTS, which has frustrated many county officials. Rather he seems biased in favor of saving money for a system that is losing funding.

Veolia and MTS have tried to claim that MV will be allowed to increase its administrative costs later, but Abele’s lawyers, in their response to the appeals, shoot that theory down. The county Department of Transportation, it notes, “now has a New Contract with MV that is waiting for final approval from the County Executive and the County Board of Supervisors” and that “locks MV into the price proposal it submitted during the RFP process.”

The contract, the lawyers go on, “includes… heavy fines if MV does not fulfill its obligations. If MV performs below established performance standards, the County can deduct amounts specified in the performance schedule from the pre-determined management and administration fees. The New Contract also includes liquidated damages that may be assessed against MV if it does not provide the services contemplated in the New Contract.”

MV is not as big or as experienced in this field as Veolia, but Frenney notes it has won 200 contracts world-wide, about half of which are for fixed route bus systems, including 700 fixed-route and commuter buses in Los Angeles and fixed-route and paratransit buses numbering 700 in Orange County and 550 in Detroit. If MV tried to renegotiate or bail out of its Milwaukee contract, that would kill its reputation when it bids for future contracts.

Nor can it cutback service, because under the contract the county still sets the routes, fares and the like.

If there is any fear that makes sense to me, it’s that the company will recoup money it may lose on administration by seeking salary and wage givebacks from bus drivers. Frenney denies this, noting that MV “will honor all wages, benefits, seniority and pension for the MTS employees and retirees.” And Abele’s lawyers note that the contract provides incentives for exceeding performance standards, and requires MV to split any incentives earned with employees.

Meanwhile, what is the county board’s solution to the problem? As I’ve previously written, the board was supposed to create a review panel to consider the legal appeals by MTS and Veolia, but board chair Marina Dimitrijevic did nothing for months, until I made an inquiry regarding this, and within two hours of my emailed question, the board immediately announced that five county supervisors had just been appointed to serve as a committee to hear the appeal.

In theory, the panel cannot invalidate the RFP process unless it broke the laws, but this is not an assembly of judges doing the evaluation, and it’s not at all clear how much discretion this panel has. It will be fascinating to see what the panel decides.

Meanwhile, the board has already passed a resolution declaring it may take the bus system in house unless supervisors approve a contract with an outside vendor by April 1 (the board has a committee studying the issue). This could leave MV as well as Veolia and MTS out of the picture and would mean the county would take over management of the system. (The county has always retained ownership of the buses, buildings and equipment in the system.)

Odds are this would mean far higher management costs than MV proposes to spend. In fact, the costs could be higher than what MTS charged: the county originally outsourced to the nonprofit in 1975 in order to lower the costs. That, of course, would result in more cuts in service to a system that has been battered by more than a decade of such reductions.