By Scottie Lee Meyers, Milwaukee Neighborhood News Service - Jan 30th, 2014 09:50 am
Get a daily rundown of the top stories on Urban Milwaukee 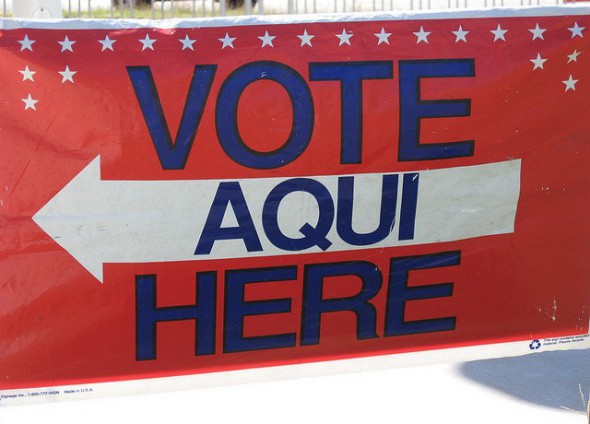 Milwaukee needs Spanish-speaking individuals to help with the election this spring. (Photo by Kristen Lopez)

On April 1, election day for local judicial races, Rhonda VanPembrook will use a personal day at her job to serve as a poll worker for the city of Milwaukee. She’ll direct residents to the right line, check paperwork and assist with same-day registration. To anyone needing help, she’s liable to ask, “Puedo ayudarle?”

Because of the growth of the Latino community in Milwaukee, the federal government says the city must provide bilingual poll workers and information about the election in Spanish, as well as a Spanish-language ballot. Last year’s elections marked the first time the city implemented the new requirement.

“Voting is an intimidating process for many people, whether they’re English proficient or not. For certain voters you can definitely notice a sense of relief when the materials are in Spanish and there’s someone there to assist,” said VanPembrook, adding that the vast majority of voters that she encounters speak some English.

Neil Albrecht, executive director of the Election Commission, said the city has hired about half of the 110 bilingual poll workers for April’s election. That number could change for the November gubernatorial election.

“It’s right about where we would expect to be,” Albrecht said.

Jesus Hernandez, the Election Commission’s full-time bilingual poll worker coordinator, will be working during the next two months to fill the remaining vacancies.

Hernandez said he’s utilized mass mailings, social media and job websites, and has reached out to area colleges and community organizations to fill the positions. In addition, he said the mayor’s office established a task force of local Hispanic leaders to assist in developing recruitment strategies.

The bilingual poll worker requirement is in Section 203 of the Voting Rights Act. After each census the federal government identifies local government units with a single-language group of voting-age citizens that either totals more than 10,000 people or is more than 5 percent of the voting-age population. Any such jurisdictions are subject to Section 203.

Milwaukee was the first, and remains the only jurisdiction in Wisconsin, affected by Section 203.

According to census data, Latinos make up 17 percent of the city’s population, or more than 103,600 total. That’s an increase of about 44 percent in the last 10 years.

The surname analysis of all registered voters in the city, conducted with support from the Wisconsin Government Accountability Board, is completed prior to each election cycle to ensure that any shifts in population or surges in registration are quickly identified and bilingual election worker staffing is adjusted accordingly.

Milwaukee’s bilingual poll workers are required by law to receive a standard three-hour training course on all job-related duties, and an additional 30-minute overview of Section 203.

Albrecht wouldn’t speculate whether the city could face penalties for failing to meet the required number of bilingual poll workers. He said, however, that since implementation of Section 203, the Election Commission has worked closely with the U.S. Department of Justice, the Government Accountability Board and the City Attorney’s Office to ensure compliance.