The village with no sidewalks or street lights will require pedestrians to be visible at a distance of 500 feet.

Leave it to a North Shore suburb to come up with the area’s first nighttime dress code for pedestrians.

What to wear? You have your choice of

The village enacted these requirements because it is “difficult for drivers of motor vehicles to see pedestrians in such circumstances and accidents and injuries could easily occur.” Of course, it might be easier to see the pedestrians if the streets were lit (there are no street lights) or if there were any sidewalks (there are none).  The village already requires pedestrians to walk on the left side of the roadway, and to hustle off to the gravel shoulder or grassy ditch upon the approach of a vehicle.

Village attorney Eric J. Larson [U-Minnesota Law School ’90] of the Arenz, Molter, Macy, Riffle and Larson law firm of Waukesha wrote an opinion saying the Village has the power to enforce the restrictions. “Requiring pedestrians to have reflectorized clothing does not logically conflict with the State regulations, because the State imposes substantially similar requirements on bicycles, for example.”

Larson cites Wisconsin Statutes 347.489(1) to support his contention. The law requires bicycles to be equipped with at least a front light and a rear reflector for nighttime operation. “It is reasonable to impose these requirements on other users of the roadway that are not driving within motor vehicles.” He then goes on to add that “motor vehicles themselves have significantly more stringent visibility requirements.”

But bicycles and motor vehicles are vehicles. Pedestrians are not.

I have a few concerns with this ordinance. For one thing, Fox Point has a cluster of businesses on N. Port Washington Rd. that are served by the Milwaukee County Transit System. Many of the minimum-wage earners employed by these firms take the bus to work. Must they wear reflectors to walk from the bus stop to their jobs?

Would the village use this ordinance to stop-and-frisk those pedestrians who are not sufficiently reflectorized?

And I really wonder if the village can successfully enforce this ordinance when it comes to the matter of observant Jews, many dressed in black, who walk to and from their religious services in Fox Point synagogues.But village manager Melissa Bohse thinks this is no problem. In an emailed response to Urban Milwaukee about this, she wrote:  “I am not aware of a religious tenet of any religious faith that would prohibit use of any of the options available to pedestrians on roadways after dark under the ordinance, much less prohibit all of the options.”

J Squared LLC filed an application with the City of Milwaukee to open a tavern on the second floor of 628 N. Broadway. The site is located above “The Box,” described as a “one-of-a-kind event venue located in the heart of downtown Milwaukee.” Both entities would be operated by Jamie L. Berger and his partner Jaime D. Levine, of Mequon. The tavern would not have a restaurant, but would be available for catered events. The pair hope to offer live entertainment, including “instrumental, D.J., bands, Karaoke, Dancing by Patrons and Dancing by Performers” in the location. That latter item sometimes raises eyebrows among members of the Licenses Committee charged with approving the application.

The 14,400 square-foot property was built in 1900 according to city records (it looks older to me) and is owned by MBI Properties, LLC., c/o Robert A. Levine, who paid $387,000 for it in 2008. The four-story building is assessed at $294,000. The operating partners will pay $1,000 per month for the second floor space, a considerable discount to the $12.87 per square foot annual rent ($3,603 per month) that the assessor figures the space could command. Other new businesses on the block, located between E. Wisconsin Ave. and E. Michigan St. include Residence, a furniture store at 612 N. Broadway and Stuff, at 608 N. Broadway. The block has seen considerable revitalization since the opening of the Hilton Garden Inn across the street.

Also in the 4th Aldermanic District of Ald. Robert Bauman, an application has been made for a tavern license by the Wisconsin Conservatory of Music, located in a lovely mansion at 1584 N. Prospect Ave. Management figures alcohol sales will represent 1 per cent of the revenues of the music school. Every drop counts… Other changes coming: Thomas L. Wackman will be the former agent and Anthony Skoufis, who owns 10 per cent of the place, will take over at Apartment 720, a second floor joint at 720 N. Milwaukee St. … Wackman will also transfer the agent responsibilities for Dick’s Pizza, 730 N. Milwaukee St. to Adam Kirchner, a 50 per cent owner of the place who gives his address as 720 N. Milwaukee St. … Port of Call, 106 W. Wells St. wants to add live entertainment and karaoke to its lineup.

The 101-year old Public Policy Forum, which is studying plans to finance Milwaukee’s cultural and sports venues, has appointed a new chairman. He is 42-year old Andrew Schiesl, an attorney who is the corporate counsel for Gardner Denver. Until last year he served in the same position at Quad Graphics.

Executive Director Rob Henken gave an address at the Rotary Club of Milwaukee luncheon Tuesday, January 14th 2014 at the group’s regular meeting at the War Memorial Center. He discussed his group’s two-part strategy for finding funding for cultural and sports activities here. The first report, issued in December, 2013, outlined the great need for capital investments on the part of selected Milwaukee institutions, including the Parks, the Bradley Center, The Milwaukee Public Museum, the Marcus Center and other county entities. The report found that our institutions are hurting for cash. It concentrated on 6 organizations that own, or aspire to own, their own facilities.

The second report, due sometime in March, will explore the area’s options for funding needed improvements and operating funds after studying how it is done in selected other comparable communities. Organizations here have done a relatively good job innovating their programs in the face of declining public support and changing market needs, he said. But capital expenses are a different story. “It’s difficult to innovate one’s way out of a leaky roof,” he said.

At the same time, it is difficult to raise private funds for basic repair and upkeep of county-owned properties like the Milwaukee County Parks which has $82.5 million in capital needs over the next 5 years. Most of these capital needs are related to repairs and replacement, and not big improvements. The County put a cap on its borrowing, further complicating attempts to improve its infrastructure.

While a 1 per cent increase in the Milwaukee County sales tax could raise $130 million annually, Henken’s group has not yet determined how much in bonding that sum could support. Regional funding, by way of a multi-county tax (which may be a political impossibility) could provide its own set of problems, since a number of regional cultural facilities not currently under study would probably like their share of the funds.

The group’s upcoming report will be used by a task force of the Greater Milwaukee Committee, whose chairman is John Daniels, to make specific recommendations. Daniels was at the meeting, as were Mike Mervis, Bill DeLind (now showing nudes in his art gallery), Kris Martinsek and Pam Garvey among others. While the meeting was underway, Milwaukee County Supervisor Russell Stamper II issued a press release calling for any study of a possible tax for cultural and entertainment venues to include funds for public transit. Numerous studies have suggested the need for a dedicated funding source for entertainment, culture and transit. It would be a shame if our comprehensive study would not include this as part of the discussion.

There will be an informational meeting on the Lakefront Gateway Project at the Milwaukee Public Market, 400 N. Water St. on Wednesday January 22nd. The meeting will be held in an open house format, says Kris Martinsek, who handed out brochures for the meeting at the Rotary Club, and then collected any left behind by the participants. Participants are invited to give their feedback on the “removal, realignment and reconstruction” of Eastbound I-794 exit ramp, and the reconstruction of certain city streets, including E. Clybourn St., N. Harbor Drive and N. Lincoln Memorial Drive.

These plans were discussed at a GMC meeting at the University Club earlier this month. 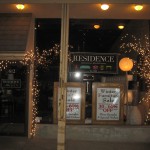 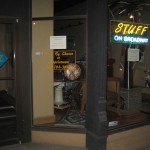 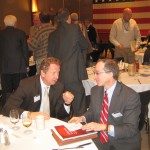