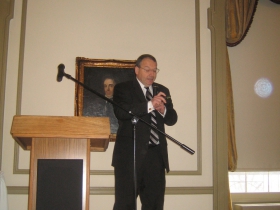 Milwaukee Commissioner of the Department of City Development Rocky Marcoux fiddles with the flicker as he gives a whirlwhind slide tour of recent downtown development. Photo by Michael Horne.

Millennials have already stabilized the city’s population, with 22,000 people now living downtown in Urban Milwaukee, according to Rocky Marcoux, Department of City Development Commissioner. Suburbanites and empty nesters have added to the population density, but “the strongest demographic is the Millennials.”

“Urban centers are really thriving, especially for the millennials,” he said to a meeting on Downtown development hosted by the Greater Milwaukee Committee Monday, January 13th, at the University Club.

After decades when population followed capital to the suburbs with their cheap land and free parking, capital is now following the creative class — and it’s heading downtown.

Gary Grunau, a pioneering downtown developer [Schlitz Park, Hyatt Regency], who was one of the 100 or so attendees, said, “Suburban office building vacancies are climbing. Downtown office vacancies are declining. The millennials and innovators are down here where they want to be.

“Thirty-five years from now there will be 60 million new people in the US,” he said. “Ninety percent will be in urban areas, not suburbs or rural areas.”

GMC Executive Director Julia Taylor gave introductory remarks to the group and to a panel of real estate experts who came together to apprise members of the GMC on the latest downtown development news. She said our downtown developments like The Couture have caught the attention of others. We “continue to make a mark on the national scene with these changes,” she said. 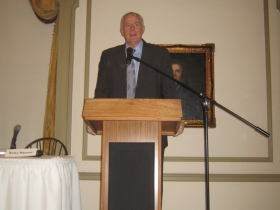 Mayor Tom Barrett, who attended the luncheon, gave some background on how his administration had to make some quick decisions to capitalize on a limited window of opportunity for downtown development that opened when the State of Wisconsin decided to rebuild the Hoan Bridge.

Street rebuilding, now underway, was “the first thing to come down the pike,” he said. Barrett and his development team spent weeks formulating a plan to connect downtown to the lakefront, where there is a 25 foot grade differential between E. Wisconsin Avenue and the lakeshore to its east. A tangle of grossly over-designed freeway ramps constructed for a never-built Lake Freeway, lie in the path of the organic growth of downtown.

But the city faced challenges from the state on the matter (and expense) of moving a few ramps a “couple hundred yards to the south,” he said, and timing was of the essence, as the state was itching to get the bridge rebuilt.

The city wanted to move the ramps to create what Marcoux called “the northwest passage to the Third Ward,” as well as to open up several acres of prime real estate to high-density development, including room for a “750,000 to 1 million square foot building … I’m convinced we can get another national headquarters to the site,” Marcoux said of the area generally in the vicinity of N. Jackson St. to N. Harbor Drive and from E. Clybourn St. to E. Chicago St.

But state officials still resisted the push to clear this space, leaving the likelihood this area would be vacant and desolate for at least another 25 years. 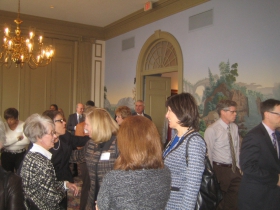 Barrett said he told Marcoux to reach out to the business community to see if it could help advance his plan. “They love Scott Walker,” Barrett told the group that included many Walker supporters like Linda Mellowes and Ted Kellner. Barrett and Marcoux managed to get the business folks to put pressure on Walker successfully. The governor pitched in $16 million to match the city’s investment, and the freeway ramps are moving as we speak, to be nestled under Hoan Bridge approaches, which is about as close to lemonade as you can squeeze out of this batch of urban lemons.

“The governor, the mayor and the county executive worked together on this,” Marcoux said. “Economic development isn’t Red or Blue,” he said. “It’s green.”

Barrett recalled being asked to meet with representatives of Northwestern Mutual who told him they planned to tear down a downtown building of theirs that housed 1,100 people, while planning to find a new home for them and an additional 1,500 workers.

“Is this a good-news meeting, or a bad news meeting?” the mayor asked. At the time, it could have gone either way, and once again the mayor dispatched Rocky Marcoux to help secure the upcoming NML Downtown Campus and to keep any silly ideas about moving to the suburbs at bay.

Sandra Botcher, a panelist who is in charge of the project for the giant insurer said, “when I inherited the campus project in October, I felt like a kid in a $450 million candy store.”

This had never been much of a concern for the Quiet Company, which has never welcomed the general public into its buildings, and barely tolerated them on its grounds.

“The new campus,” including the NML Gardens “will say, ‘come in. Walk through, sit, have a cup of coffee,'” she said.

There will be a glassy entrance on N. Prospect Ave. where the general public will be welcome without an appointment (or ID card.) She hinted that the company might have displays in the lobby, perhaps a museum of sorts.  The “Top of the Tower” on the 32nd floor will also have space for the public, employees and public events, she added. A Mason St. entrance will also be open to the public, as will the company cafeteria. You will be able to cut through the building to get to your bus, she said. The firm is also considering leasing or purchasing the O’Donnell Park parking garage, she said.

Developer Rick Barrett [no relation to the mayor] talked about his plans to build the Couture on the site of the underutilized Downtown Transit Center. “The value of the Transit Center is zero,” he said, basing it on the taxes it generates, but implying it is a drain on the potential growth of the downtown economy. Barrett cited his experience with the former parking lot he owned that is now the site of the highly acclaimed Moderne, a successful and speculative structure built during the Great Recession.

“To take parking lots and turn them into revenue-producing property is the Holy Grail of downtown development,” he said. The tax bill on the former Moderne property was about $15,000 when it was a parking lot, he said.  “Now it is $1.2 million per year.”

The downtown lakefront  “is underutilized, under-taxed and frankly, underwhelming,” Barrett said. “We need cranes in the air. Denver, Minneapolis and Madison have double-digit cranes” active now he said.

Mark Irgens talked about his plans to break ground this spring for an 18-story building at 833 E. Michigan St., just east of the U.S. Bank Galleria. The property sale is scheduled to close at the end of the month, he said. The new structure will be about twice the height of his 875 E. Wisconsin Avenue building, just east of the U.S. Bank Center tower. “There is no 13th floor, so actually it will be 17 not 18 floors,” Irgen said. It is to include 444 on-site parking spaces, a number that would have been higher had he not made arrangements to share parking in the U.S. Bank parking structure, to which his building will be connected. The office tower has 156,000 square feet under lease, and four prospects are currently looking to lease 50,000 square feet in the building. He cited the building’s walkability, cable redundancy, electric service redundancy and flexibility to accommodate new technologies as being important to potential tenants. He also promises a “white tablecloth” restaurant for the building, such as U.S. Bank had for years decades ago.

Joe Ulrich of U.S. Bank told of the behind-the-scenes remodelings that are transforming the state’s tallest office tower, which it owns. Robert W. Baird is currently remodeling 14 floors of space in the 41-story building, he said.

The bank itself hopes to add 300 to 500 people to its downtown workforce, he said. The bank is considering having a hotel development take place north of its new parking structure, where a courtyard now acts as a passive filter for rainwater.

The bank has also partnered with the Bartolotta restaurant group to re-do the cafeteria in the building. Working with Bartolotta, he said, “was like being on a fantasy cooking show.” The bank is investing several million dollars on the common areas of the building to open the space up to larger functions. About 30,000 square feet of lobby space is currently underutilized, he said. The bank is adding a locker room, 24-hour showers and a bike share station to its facility, Ulrich said. These amenities “are being driven by the occupants,” he said, conjuring up images of millennial bankers biking to work and showering down before beginning the day’s work. “They want healthier options and we are responding to that.” 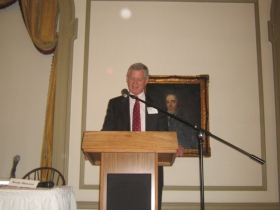 So when will these developments take place? asked moderator Bruce Block.

Marcoux said the city’s projects have already begun, as anybody who has been in the vicinity of the Milwaukee Public Market and the new N. Milwaukee St. boulevard can attest. Since the former ramps will be used for traffic re-direction during construction, Marcoux figures the area will be open for development in late 2015 or early 2016. The city plans an international marketing effort for the site, and its vicinity, including the desirable lands of the Italian Community Center nearby. Barrett figures his development will get going in the first quarter of 2015 with the building being ready to fill in 2017.

Botcher of NML said demolition (actually de-construction) of its building has already begun. The new tower should be completed and ready for move-in in late 2017. Irgens said his 833 building would get rolling in 2014. Ulrich said the improvements to the U.S. Bank Galleria would be complete in the 4th quarter of 2014.

“We can’t build a parking lot for every development,” he said. If the city is to build parking garages they need to be “bigger, strategically located and tied into transit,” he said.

These things all take time, Marcoux said. “Twenty-five years ago who would have built in the Third Ward?” he asked. “Now it is built out,” due to what he called the “organic growth” that he expects the millennials to bring here. “The spill-over [from the Third Ward] has already occurred in the 5th Ward.” He expects there will be a 25-year build-out of that area.

“People expected when the Park East [Freeway stub] went down that you sprinkle a little water on it and it will grow,” Marcoux said to the audience of business leaders. “You know that’s not the case.” 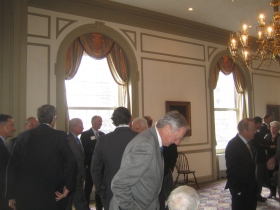 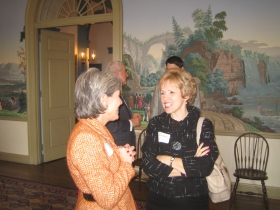 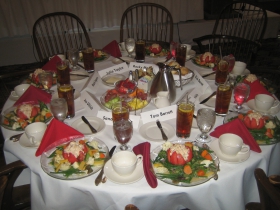 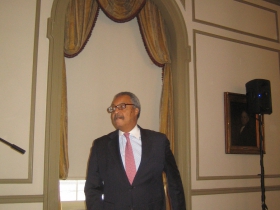