Gov. Scott Walker recently commented that he hoped to completely eliminate Wisconsin’s income tax. One of his key reasons: “If you look at the top states across the country, in terms of job growth, consistently they are states that have no income tax, or very low income tax.” Where did this assertion come from and is it accurate?Although Walker cited no source for his claim, it is likely based on a report called Rich States, Poor States, issued annually by the American Legislative Exchange Council (ALEC). The authors are economist Arthur Laffer, Wall Street Journal editorial writer Stephen Moore and Jonathan Williams, an ALEC employee. Laffer is best known for popularizing the “Laffer Curve” which purports to show that lower tax rates may increase tax revenue. Although rejected by mainstream economists, the Laffer curve plays a central role in the ALEC-Laffer reports. 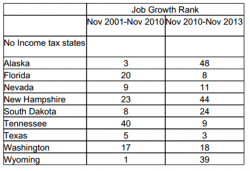 Both the sponsor and the authors are long-time opponents of income taxes, particularly progressive ones—those charging higher rates to wealthier taxpayers. Laffer and his colleagues don’t take criticism well; their chapter answering their critics is entitled: “There They Go Again: A New Dose of Junk Economics.” They really, really dislike taxes on wealthy people. They clearly see their role as advocates of a policy they repeatedly describe as “common sense.” The chart on the right shows the nine states with no personal income tax according to Rich States, Poor States. The second column shows how each state ranks against all states in percentage job growth between  November 2001 and November 2010 based on data from the US Bureau of Labor Statistics. The third column shows the same states’ rank in job growth between 2010 and 2013.

One obvious characteristic is geographic: none of these states are in the industrial midwest or even close to it. The closest they get to Wisconsin is either Tennessee or South Dakota.

The second noticeable thing is the wide variation of results. Only one state in the group (Texas) fell into the top ten in both periods, and thus could be said to support the governor’s assertion. Otherwise there is considerable jumping around.

Here are a few comments on the individual states:

Considering the wild variation among the individual states and over time, the governor’s statement is not supported by the evidence. Predictions about changes in employment from eliminating the personal income tax are pure speculation. As can be seen from the brief descriptions of several of the no-tax states, economies respond to a variety of factors. If state income taxes were the dominant factor one would expect much more consistency among these states and over time.

Nor has the model been a success in Wisconsin in producing the 250,000 new private sector jobs promised by Walker. As is well-reported, Wisconsin is on track to miss this by a wide margin, likely adding about 130,000 jobs over four years. More telling than missing this target is Wisconsin’s lagging job growth compared to that of its neighbors. Wisconsin lags every neighboring state but Illinois—and even with Illinois’ well-publicized pension problems, Wisconsin only ties it in job growth.

For years, jobs in Minnesota have closely tracked Wisconsin’s. But Minnesota has recently added jobs and reduced the unemployment rate faster than Wisconsin. According to the Laffer/ALEC/Walker model Minnesota should be lagging Wisconsin. In all but one of the measures Laffer uses to rate state tax policies Wisconsin comes out ahead (not surprisingly the exception is property taxes). Minnesota is particularly penalized because of greater personal income tax progressivity and because of its inheritance tax. Yet it’s doing much better at creating jobs.

In all, Laffer uses 15 factors, about half related to taxes, to rate the economic “outlook” of states. Since Walker entered office, Laffer moved Wisconsin up to 15th place in the rankings while Minnesota fell to 46th. A model that does such a poor job of predicting is not very useful. But this failure of prediction does not seem to have triggered any fresh thinking among its supporters.

Ironically, the assumptions underlying the model advanced by Laffer and ALEC is oddly government-centric. It puts government policies at the center of the economy and relegates the private sector to a largely passive role simply responding to government policy, rather than active players proactively exploring new ways to add value for their customers.

If Wisconsin was to look for a model to guide its policies, it might find more useful results in the State New Economy Index published by the Information Technology & Innovation Foundation, a nonpartisan think tank. It rates states using 26 indicators in five broad areas (knowledge jobs, globalization, economic dynamism, the digital economy, and innovation capacity) to judge whether they can compete on innovation and entrepreneurship rather than cost. Wisconsin comes in at 31st place; Minnesota scores 13th, the highest in the Midwest.  Perhaps that is a place to start.