How Mike Vitucci created a bar for more adult customers.

Mike Vitucci opened Belmont Tavern (784 N. Jefferson St.) in May 2012 just three months after he planned it. His goal was to give Cathedral Square a lounge. He had opened the nearby Whiskey Bar in 2009 and despite its great success, he lost some customers who wanted a more laid-back environment.

Belmont Tavern was Vitucci’s first ground-up build because there wasn’t a bar previously in the building. His cousin owned the clothing store Sonny and Melody’s which had stood in this building for 40 years. Vitucci had walked past the store many times and decided it would be a great location for a lounge 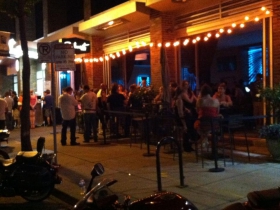 A shot of Belmont Tavern at night. Photo courtesy of Mike Vitucci.

“It’s ironic how many people love Whiskey but left because they wanted a more lounge-like environment.” To accomplish, this, Vitucci says, “I went all out. I wanted to pack in bells and whistles to make it more special.”

Besides Whiskey Bar, Vituccui also owns Murphy’s Irish Pub and Chaffery’s Pub. Belmont Tavern is his fourth venture and by then he had the process down; he says the opening of Belmont Tavern went the smoothest.

“People don’t understand how stressful it is to open a business. I had so much to do and wouldn’t sleep until it was all done. My children and wife came Downtown to spend time with me because I didn’t want to neglect them,” he recalls.

His hard work paid off and the opening night crowd was small to medium sized. Vitucci does not heavily advertise his bars. “I wanted the crowd to be busy but still manageable so my staff wouldn’t be overwhelmed,” he says. “A lot of people learn about my bars through word of mouth.”

Belmont Tavern gives tribute to the city’s old Belmont Hotel (located on 4th and Wells streets from 1926 to 1997, when it was torn down to make way for the city’s new convention center) with hip 1920’s and ‘40’s art deco and LED energy efficient lighting panels. These 10 foot by 50 foot LED panels have a color wheel which changes its 15 hues every two minutes from a programmed iPad.

Vitucci wanted to make Belmont Tavern conducive to conversation like a typical lounge. There are DJ’s but no dance floor. Local rock and roll musician Joe Wray entertains the crowd on Tuesdays and brings in more musicians. The bar is only 1,500 square feet as opposed to Whiskey Bar which is 8,000 square feet. It has an open feel with tables and booths which seat four to six people.

“In summer time, you see three sections of floor-to-ceiling windows that open to expose the bar directly to the street. In winter, you notice the entire place lit up from all of the color-changing LED lights through the huge windows. You’ll feel warmth with the LED paint schemes, the granite bar top, the big plants, the comfortable and leather-clad booth or the high top seating,” notes Joel Harris, general manager.

Vitucci takes pride in creating a “detail-oriented” atmosphere. During the design process, he even hired a consultant on what people want when going to the bathroom.

“We designed our bathrooms to be male and female friendly,” explains Vitucci. “The male bathrooms are dark and the female bathrooms are bright. Stalls reach down to your feet and the doors have no cracks for privacy. The doors also have signs indicating whether stalls are occupied or not. The sinks and soap is touch free.” 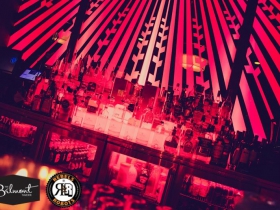 Belmont Tavern draws an after-work crowd from Cathedral Square and Downtown for its 4 pm – 8 pm happy hour specials when drinks are up to half off. Bartenders can come up with a custom drink on the spot for a personal touch.

“We have an extensive drink menu of all different types of martinis, specialty drinks as well as a seasonal drink menu. All drinks are a combined effort of the staff and me. Right now, our hot apple cider drinks are our best sellers because it’s winter,” says Harris. Out-of-town visitors who stay at The Pfister and Hotel Metro, including sports figures and politicians, view Belmont Tavern as a hideaway for its mature crowd.

“You’re guaranteed to see an opposing sports team player visit Belmont Tavern. They usually stay at Pfister Hotel. Celebrities prefer a more mature crowd and most people who visit Belmont are 24 and up who don’t act starstruck when seeing a public figure,” says Vitucci. Vitucci’s family opened Vitucci’s Lounge on North Ave over 70 years ago, not too long after prohibition ended. He left Vitucci’s in the early 2004 and opened Mantra Lounge, which he later sold. He is a self-described party starter who takes pride in his friendly staff and low turnover rate.