Our new column will capture scenes of the old city, like this bustling strip of wholesale grocers. 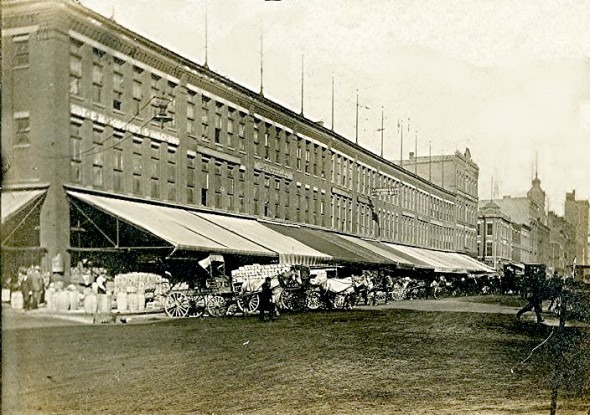 Photograph of Commission Row from 1910. Photo courtesy of Jeff Beutner.

While many if not most of the early buildings of downtown Milwaukee have been lost over the years, one area that remains remarkably intact is the Third Ward. Many of the buildings in this circa 1910 photograph will be familiar. The main building with the awnings is Commission Row, at the time the home of many wholesale grocers. Note the bustle of activity with horse-drawn wagons loading and unloading merchandise. In the background the Railway Exchange building and Mackie Building are also visible to the right.

In 1910, Commission Row was a relative newcomer to the Third Ward, thanks to the fire of 1892 which destroyed nearly every building in the vicinity. One of the few survivors of the fire is the Jewett and Sherman building seen just to the immediate right of the row. It dates from the 1870s and is distinguished by its Cream City brick exterior. Today the building still stands, across the street from the Public Market, and this entire area is filled with boutiques and restaurants.

Jeff Beutner is a collector of photographs, postcards and stereoviews of old Milwaukee. This new column will feature these images, with historical commentary by Beutner.