This will be the last year for the Faye McBeath Foundation, established in Milwaukee the 1960s and fully funded at the death of its benefactor at age 85 in 1967. The terms of McBeath’s will charged her trustees to disperse all foundation assets by December 31st, 2014. The year of reckoning is upon us.

McBeath (pronounced “McBeth”), born in 1882, was a niece of the childless Milwaukee Journal founder Lucius Nieman, who established the daily paper that year. Following a brief teaching career in the Milwaukee Public Schools, she worked for Nieman as confidential secretary from 1916 until his death in 1935, at which time she inherited 27-½ per cent of Journal stock, worth over $4 million.

She eventually sold most of her holdings to the company’s employee stock ownership program, retaining just 7-½ per cent at her death.

McBeath, who never married, used most of her wealth to fund the foundation. (Her personal property was willed to Ms. Leonie Kennedy, a former pupil of hers at North Division High School, who was described as  a “close friend and companion” of 40 years and who had lived with McBeath at the Cudahy Tower and on her Oconomowoc estate, and remained in the apartment until her death at 77 in 1971.)

McBeath endowed the Nieman Chair in Journalism at Marquette University, added to the endowment of the Nieman Foundation at Harvard University, (established with widow Agnes Nieman’s estate), funded the Children’s Room at the Milwaukee Public Library and was a substantial donor to the construction of the Performing Arts Center (now Marcus Center for the Performing Arts).

McBeath had a particular interest in children, and her wishes have been honored by her trustees in their grants.

The foundation had assets of $4,608,444 in 2010 and has been whittling them down at the rate of about $1 million per year as its sunset approaches.

At the end of 2012, the most recent year for which information is available, the foundation had assets of $2,453,272, after paying $997,538 in grants that year in such fields as reading, education, parent involvement, playgrounds, parenting skills, elderly care and community health.

Recipients, limited to foundations and non-profits incorporated in the State of Wisconsin with operations in the community, included the Summer Reading Outreach [“Super Reader”] Program of the Milwaukee Public Library Foundation ($35,000), the Penfield Children’s Center Behavior Clinic ($100,000), The Holton Youth + Family Center ($35,000), the Next Door Foundation ($40,000) and other organizations, including the Marquette University Community Impact Journalism Project ($23,200). That project is closely allied with the Milwaukee Neighborhood News Service, a content provider for Urban Milwaukee.

The McBeath Foundation is run by Executive Director Scott E. Gelzer, who received $96,835 for his services in 2012.

The foundation’s board consists of one corporate trustee (U.S. Bank, N.A.) and five individual trustees.

They are Chair P. Michael Mahoney, the CEO and Chairman of Park Bank; Vice-Chair Mary T. Kellner, a philanthropist with an interest in childhood education; Secretary Gregory M. Wesley, Esq., a partner with Gonzalez Saggio & Harlan LLP; Sara E. Aster, who with her husband Dr. Richard H. Aster has an endowed professorship named in their honor at the Blood Center Foundation of Milwaukee; and Steven J. Smith, the Chairman and Chief Executive of Journal Communications.

Each trustee received $6,250 in annual compensation for their one hour per week service on the board, with the exception of Secretary Wesley, who received $5,750 for his work. 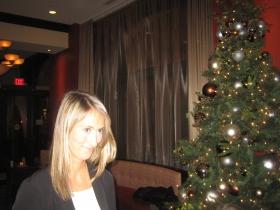 The Hilton Garden Inn Milwaukee Downtown was the site Friday, January 3rd, of a farewell party for Grace Fuhr, Program Manager of Historic Milwaukee, Inc. for the past two years.

Fuhr, who had done much to expand awareness of the historic group to an audience far younger than the buildings it seeks to preserve, will become the Milwaukee office manager for state Sen. Chris Larson [D-7th]. In that position, she replaces Jonathan Brostoff, who quit to campaign full time to replace the departing Rep. Jon Richards [D-19th] in the assembly. Fuhr had previously served as Legislative Assistant to Ald. Nik Kovac of Milwaukee’s 3rd district.

Fuhr was involved in the outreach programs of Historic Milwaukee, including its Spaces and Traces neighborhood tours and the wildly popular Doors Open Milwaukee and “Envisioning the Seen,” described as “a cross between the Fireside Chat, an 18th Century Salon and a Modern Act of Civic Largesse.”

In brief remarks to the audience of over 50 who gathered to enjoy snacks and light refreshments in the lobby of the hotel, the former Loyalty Building (1886), Fuhr stressed the importance of bringing a passion for history to non-traditional audiences. The considerably youthful demographic of the audience shows that that goal is on its way to being met, which bodes well for the future of history.

Among those in attendance were Stacy Swadish, who became the Executive Director of Historic Milwaukee in September, 2013 following the departure of Anna-Marie Opgenorth, who left for a position with the Mandel Group. Swadish was joined by Amy Grau, coordinator of Doors Open, already busy with plans for the fourth year of the September building tour.

Others included Keith Hayes of BeIntween, whose projects include the ARTery and the Holton Marsupial Bridge swings, joined by Ellie Jackson, Events Coordinator of the Midwest Renewable Energy Association. Hayes said his group recently installed a pair of solar-powered eyes on the fence of the Holton Viaduct’s upper level Blue Dress Park, with the approval of the Department of Public Works, which does not always accommodate his whimsy. He added that if the swings are to return to the Marsupial Bridge, it may likely be on the north end, rather than on the south end’s “Media Garden,” the architectural integrity of which is jealously guarded by its designer, Grace La, now teaching at Harvard University. 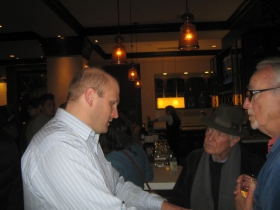 Also in attendance was Jeff Jordan, an Historic Milwaukee board member and volunteer. Jordan spent a good deal of his time chatting with Ald. Nik Kovac and Bill Sell, who has promoted urbanism for decades before many of the attendees were born.

Part of Kovac’s job is to balance preservation with new development in his district, which can be a tricky task indeed. One issue on the front burner is plans of developer Joel Lee to ask for $2.5 million in city financing to preserve the 98-year old Downer Theater and to construct new apartments and a boutique hotel on the East Side thoroughfare.

Kovac is not so sure that the city funding is a good idea. Lee has some leverage — the theater is on a month-to-month lease with its operator, and Lee has said, “if we lose the movie theater, that would be a death knell on Downer.” Lee is probably looking north to Shorewood, where that village helped finance new construction on N. Oakland Ave., and figures the model might fit here a little further down the road.

Kovac said that in his meetings with Lee, the developer is accompanied by advisor Michael D’Amato, the previous 3rd District alderman.

Also mingling with the others was good-spirited E. J. Brumder, 80, whose past historic exploits have included portraying Solomon Juneau at a Juneau Park event some years ago. Brumder, who moved from his Bay View home to a Cudahy Tower apartment for a spell has since downsized to a 500 square foot unit in the Jefferson Court apartments, “affordable housing for income-eligible seniors over 62.” 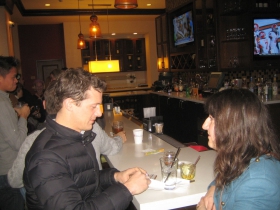 The crowd at Grace Fuhr’s farewell to HMI party. Photo by Michael Horne.

Brumder said he is happy in his new, very convenient home, and has met many delightful people he might never have met otherwise. (Likewise, few residents of income-eligible subsidized housing in the past would have had a Brumder for a neighbor, just showing you how easy it is to outlive your assets nowadays). Brumder said his new home doesn’t have room for his extensive collection of Milwaukee genealogy (wealthy German families were his specialty) but that with a friend’s assistance, he was able to donate this priceless original research to the Wisconsin Historical Society.

Then, with the party still going, Brumder excused himself. “It’s cocktail hour at the community room at Jefferson Court,” he said, and was off into the night.

There will be a memorial service for preservationist Donna Schlieman at Immanuel Presbyterian Church, 1100 N. Astor St. on Sunday, January 12 at 3 p.m.

Schlieman, an Illinois native, had no relatives in Wisconsin, but two cousins of hers from out of state are expected to attend.

The service will use music Donna had selected. It will last about 30-40 minutes, followed by coffee and cookies.

One thought on “Plenty of Horne: Goodbye Faye McBeath Foundation”