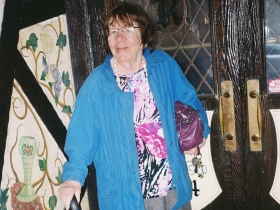 Schlieman served on the boards of many organizations, including the Milwaukee Preservation Alliance and Preserve our Parks.

She was noted for her tenacity, advocacy and scholarship. Schlieman kept an eye out for buildings that should be preserved, and saw to it that those with historic designations lived up to their promise, and their owners to their responsibility as stewards of the past.

She was awarded the Cream of the Cream City honors by the City of Milwaukee in 2002, and worked closely with staff on historic designations. She was a tour guide for Historic Milwaukee, Inc. and the Pabst Mansion, where director John Eastberg writes,  “Ms. Schlieman was also a friend, volunteer, and great supporter of the Pabst Mansion. Such a wonderful citizen for our fine city who will certainly be missed.”

“We’ve lost a great person who cared so deeply about the city and its citizens.  She really made a difference in Milwaukee,” Paul Jakubovich, Historic Preservation Coordinator for the City of Milwaukee tells Urban Milwaukee.

He adds: “Donna was present at virtually every Historic Preservation Commission meeting for many years.  She would frequently ask to comment on an issue (even if it wasn’t her nomination) and really gave the commission something to think about.  She was always kind, but direct—she always had a good point or two and got that across quite elegantly.  She also watched out for buildings that had already been designated and didn’t hesitate to let us know if something was going on that she thought was against the guidelines.  Public input is vital in preservation and Donna showed how that could be done.  I’m sure many of us learned a lot from her example.”

Says Bill Hibbard, a board member of Preserve our Parks: “I’ve never known anyone who followed governmental meetings with such tenacity…and kept feeding pertinent news about what was coming up and what transpired at the meetings to those who needed to know. She personified Democracy in Action. She was a vital member of the Preserve Our Parks Board of Directors, which is where I came to know her.”

Hugh Swofford, who has a particular interest in preserving old movie theaters says: “I will miss her commentary on preservation topics. I also knew her when she was with Historic Milwaukee and I think was just finishing her nursing career. She also used to make wonderful pies for people which she would say that she could not eat. I don’t know how long I have held onto being a member of this group ever since the very beginnings of the MPA I think just to read her commentaries. Many people bailed out of this group of people but not me. That was all for Donna S. who I really liked.”

Dawn McCarthy, President of the Historic Preservation Alliance and Executive Secretary of the Executive Committee of the Historic Water Tower Neighborhood Association says: “What people probably don’t know is that Donna continued to advise MPA even after retiring from doing heavy duty HP advocacy work due to her health.  I didn’t know Donna as well as I would have liked to but she was extremely helpful to me and resourceful, and was always an inspiration. I am very grateful to all of the work she did. The city of Milwaukee and future generations are in her debt.”

Finally, there was this comment from Genell Scheurell, Senior Field Officer fore the National Trust for Historic Preservation: “I was saddened to hear of Donna’s passing, she was such a special woman.  When I started as field rep for the National Trust and was assigned Milwaukee as a territory, Donna was one of the first people I met with. Her knowledge and perspective was, and has always been invaluable.  She always operated from her heart, and her love of the city and its architecture. Donna’s tenure as a Milwaukee Preservation Alliance board member launched a nascent group into its role as the leading Milwaukee historic preservation advocacy organization it is today. Donna has remained a friend and will be sorely missed, but she’ll always remembered as one of the founders of Milwaukee’s preservation movement.”

SCHLIEMAN AND THE PABST BREWERY

One example from the extensive roster of Schlieman’s activities serves to illustrate her impact in preserving and developing the assets of Urban Milwaukee: In 2005 Schlieman founded a group called the “PBR Committee,” with “PBR” standing for “Preserving Buildings for Reuse” to preserve what she called, “the world’s largest complex of Cream City brick structures” at the former Pabst Brewery.

WISPARK, the development arm of WE Energies, had proposed a plan to develop the old brewery as an entertainment destination. Its first proposal, including such fantasies as a George Karl Basketball Camp and a House of Blues, called for saving most of the buildings at the complex.

But the developer tried to sneak in a change, which did not escape the eye of Schlieman. She told a reporter for Small Business Times, “We’re a group that formed to save the buildings. We feel Wispark came back with plans to destroy 20 of the 28 buildings. We feel that’s not a good business plan.”

Schlieman faulted the developer for failing to pursue $20 million in historic tax credits for the project, which had the support of Mayor Tom Barrett. Schlieman had an eye to the future in her comment about the proposed development, which ultimately failed in a considerable setback for the mayor. “Let’s return PabstCity to its original mission as a viable, living historic development. And let’s see that Milwaukee taxpayer money goes to worthwhile neighborhood projects like the Tower Automotive redevelopment, the Fond du Lac Avenue renaissance and Bronzeville,” she wrote.

Shortly after the Wispark plan failed to receive Common Council approval, Barrett received a telephone call from Joseph Zilber of what was then Towne Realty offering to purchase most of the brewery site and to save many of the buildings. Barrett called it a “once in a career opportunity. Not once in a term, once in a career.”

Zilber received Tax Incremental Financing from the city to install infrastructure and to prepare the site for redevelopment. The Brewery, as it is now known, has a mix of residential, commercial and entertainment uses, just as Schlieman had advocated.

The mayor, conscious of symbolism, held his 60th birthday party at the Brewhouse Inn and Suites at The Brewery on Thursday, December 19th, 2013, the evening before Schlieman died.

Schlieman was predeceased by her father Arthur, her mother Doris, and a brother Richard, who died at 21 in 1960. Information on other survivors is not available at this time.

The Preston-Hanley funeral home of Pekin, Illinois, is handling arrangements.