Speaking at St. John's on the Lake, she talks about her conversation with Cruz, earmarks and voter ID. 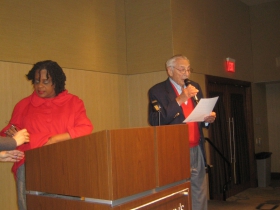 Gene Gilbert introduces Rep. Gwen Moore who is still fussing with her microphone at St. John’s on the Lake Monday, December 30th, 2013. Photo by Michael Horne.

Rep. Gwen Moore spent the penultimate day of 2013 in her district talking to residents of St. John’s on the Lake, the Episcopalian home at 1840 N. Prospect Ave.

She was introduced to the 60 or so in the audience by Gene Gilbert, a resident who has brought a new level of political involvement to the home since moving there a year or so ago.

“Gwen Moore will tell us what’s going on in Congress,” he said, adding, “Some say nothing.”

“It’s not the worst Congress ever,” Moore replied, reserving that honor for the days when members would duke it out on the floor. “But it’s close.”

“One of the most heartbreaking things of the last session was that we did not extend benefits to the long-term unemployed,” she said, as an audible murmur of approval passed through the house.

She said that some two million children are dependent on these payments to their parents, who are not “welfare bums,” as some suggest. “The unemployed aren’t bums who don’t have any grit in their craw,” she added, using the vernacular of a Tennessee ward heeler.

She said things are not much better for the full-time minimum wage earners. “They are eligible for Medicaid and food stamps and are working full time. Government is subsidizing private business.”

Moore was asked about the chances of getting the minimum wage to $10.10 per hour from the current $7.25 an hour rate set in 2009. She reckoned it at 50-50. “There is a chance Congress can do it,” she said. “Otherwise the President will raise it on his own.”

In response to a question on campaign finance, Moore suggested a major change: 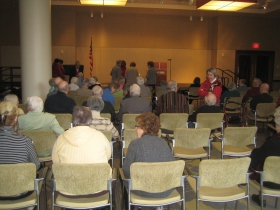 About 60 residents of St. John’s on the Lake gathered in the community room to hear a presentation and question and answer session with Rep. Gwen Moore on Monday, December 30th, 2013. Photo by Michael Horne.

“We need a constitutional amendment to say that corporations are not people, my friend,” she said, modifying the words of Mitt Romney. The amendment would be to turn back the provisions of the Citizens United Supreme Court decision that allows unlimited money into political campaigns under the guise of free-speech.

“You can give me $4,800 [the maximum from an individual] and then a corporation can give millions for or against me.

“That doesn’t pass the laugh test, not to mention the smell test.”

Moore called the Defense Department budget “bloated,” and offered the example of an obsolete bomber. “The Defense Department doesn’t want it, but the people who make the components want it.” Their lobbyists blanket the offices of representatives in any district that manufactures components — she cited Virginia and Connecticut — to secure their votes to continue funding the project.

“It crosses party lines,” she said.

Moore was asked if she supported the elimination of congressional earmarks, appropriation measures that allowed members of congress to designate funds for construction projects in their districts.

“I’m in favor of earmarks,” she said flatly. “But I don’t get any earmarks.” She derided colleagues who she says are “posing for holy pictures” with their opposition to earmarks.

As an example of why she supports earmarks, she used the sewer system of the Village of Whitefish Bay, a North Shore suburb that was added to her district after the 2010 redistricting.

Whitefish Bay had encountered flooding in recent years due to storm failures. As a member of Congress, Moore would have the opportunity to secure a funding fix for the sewers by inserting a measure into the budget. The House of Representatives, after all, is where all bills appropriating reveune originate, under the constitution.

“But now the president gets to choose,” whether to fund the Whitefish Bay sewer improvements. “They have taken power from individual members of Congress and given it to the executive branch. I’ve done some wonderful earmarks,” she said, mentioning funding for MMSD projects in the past. 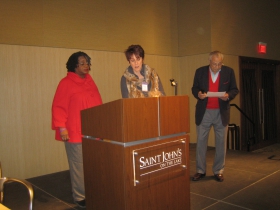 Rep. Gwen Moore (l) gets ready to speak as host Gene Gilbert consults his notes prior to introducing her to the residents of St. John’s on the Lake Monday, December 30th, 2013. Photo by Michael Horne.

But no longer. Speaking of a new class of about 50 to 60 Republican lawmakers, she said “they have a point of view that there is no role for government. They want an oligarchy, a plutocracy, whatever you want to call it. They want to shrink the economy and maximize profits. They are getting the country close to the days when we had free labor.”

Moore was also asked about the hot-ticket item of Voter ID. “I first encountered the Voter ID issues in 1992 when Scott Walker got in the legislature. That’s how long this has been going on.

“Voter ID is aimed at disenfranchising voters, most of whom vote Democrat. It can only stop one kind of fraud — impersonating another voter. The drivers license doesn’t say if I am a felon, it doesn’t say if I am a citizen. There ought to be a very high threshold to deny the right to vote. You are as good as Oprah Winfrey on election day.”

Moore seemed in good spirits and told the audience she was happy to be back in the district. During the August recess, she said, she had double knee replacements, and did a little dip to show off her new mobility.

She said on a recent trip to South Africa, she spent 20 hours in the plane seated next to Sen. Ted Cruz, and another 20 hours on the way back with the same seating arrangement.

“Why did you do that?” she was asked.

“So I could educate him.”

Moore was asked about the 2016 election. “If Hillary [Clinton] is going to run, I’m supporting her. I’m going to work for her. If she gets the health clearance, I’ll support her.”

On immigration reform, which she favors, she sees “hundreds of billions in economic impact. This is a country of immigrants. This is no time to slam doors.”

And for her own future?

“If the Congress thing doesn’t work out there’s always Gwen I can be.”

Wisconsin has eight members of congress, and four of them have a piece of Milwaukee County. Gwen Moore [D] represents the city and lakefront suburbs north and south, while Jim Sensenbrenner [R] has Wauwatosa, West Allis and Greenfield and Paul Ryan [R] has Greendale, Oak Creek and Franklin.

This leaves the Village of River Hills, which somehow became the land of Tom Petri [R]. Why? Gwen Moore suggests that the redistricting was done to favor a certain River Hills legislator in the event Petri ever retires. “It’s because Alberta [Darling] still has aspirations” of becoming a member of Congress, she said.

The Milwaukee Public Museum dropped its free Monday admission policy for 2014. Instead, Milwaukee County residents can enjoy the museum for free on the First Thursday of each month.

First Thursdays are also the free days for the Milwaukee Art Museum. Why not pick some other day?

Mary Bridges of the museum says, “once-monthly free days keep us in line with our peer institutions.  Thursday was chosen because MPM is open until 8 p.m., allowing more families to participate after work and school.”

Why not the second, or third, or fourth Thursday?

Phil Walzak, a campaign operative and government staffer, is mentioned as a likely member of the communications team of Mayor Bill de Blasio of New York City. Walzak served as the de Blasio campaign’s senior communications adviser. He coached the candidate in mock-debates during the election, where de Blasio went from 4th place to the top of the ticket in a surprise primary victory. Walzak also has experience running campaigns for Tom Barrett, including his successful run for mayor and unsuccessful runs for governor. He has also worked in the state legislature and at the Department of Homeland Security.