The Man Behind the RedLine 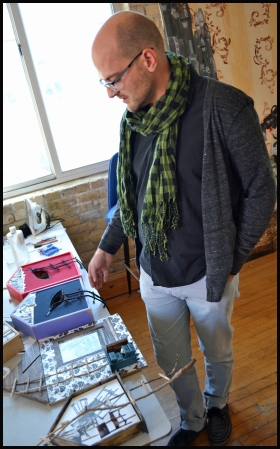 So how did a kid from Ripon, WI, population 7,000, become a leader in Milwaukee’s art community?

Steve Vande Zande, born in Colorado, became a Wisconsinite when his parents relocated to Ripon, a town whose Web site boasts it is peaceful, safe, and the “Birthplace of the Republican party.” There he was nurtured by a working class family whose examples profoundly impacted his future career choices. (His grandparents in Brandon, Wisconsin, nine miles away, were also an influence.)

Perhaps Ripon was too small to fit into Steve’s future dreams, but he credits his public school education there for “nurturing his creativity and artistic aspirations,” and giving him the “gift of the working class: perseverance and diligence.” His mother was and still is, a bookkeeper, and his father is a retired truck driver who often went on long hauls and during a trip brought an armadillo back from Texas. These days, Steve walks his two dogs around the Silver City area where he lives with his partner. He describes it as real “cool”, a diversified neighborhood near 30th St., between National Avenue and Greenfield. He takes advantage of the proximity of the Hank Aaron Trail and the new Urban Ecology Center in the Menomonee Valley. On his treks, he picks up discarded materials to use in his art adventures. He finds new uses for what others deem useless.

Steve knows the value of “making do.” When he couldn’t afford a shirt he yearned for, his grandmother cut a pattern, and together they made the shirt. “We always used our hands,” he says, which fueled his love of art. He pursued a Fine Arts degree at UW-Milwaukee, and later, a Master of Science degree (with an emphasis in art) at New York City’s Bank Street College of Education (in conjunction with Parsons The New School for Design).

Some of Vande Zande’s Work. Photo by Grace Fuhr.

He was hired as a Milwaukee Public Schools teacher in 2001 , and has taught art for years at Hartford school (on the corner of Hartford and Maryland). In 2003 he was  chosen Wisconsin Teacher of the Year. A recent project for his 6th grade class: making prints by mixing sandpaper grit with matte medium, and then using it to paint images on a piece of plastic waiting to be inked. Vande Zande calls the school a “wonderful” community partnership between families, staff and students. MPS often takes a beating in the press, but Steve remains positive, in a world too often skewed negative.

In 2001, he hired artist and videographer Lori Bauman to help him teach at ArtWorks, a highly regarded teen outreach program he developed through the Milwaukee Art Museum. Their belief that Milwaukee was ripe for a generously supported creative community, soon manifested itself as RedLine Milwaukee, an art incubator they created, located at 1422 N. 4th St. For those of you who recall the former Vogue Cleaners and the distinctly funky ‘50s sign with peeling turquoise paint that still signifies the now defunct laundry business, RedLine is the first door north, housed in an expertly restored 94-year-old factory building, itself a slice of Milwaukee history. Variously home to Phillips Lithography, a ribbon factory, and finally, as a repository for restaurant equipment, the structure is well positioned on a broad, quiet street, near what everyone hopes will eventually be a fully developed Park East Corridor.

The lobby chairs at the art incubator, repurposed from seating left behind by a former tenant, were re-shaped and covered in RedLine red. They send a strong signal that things are happening in the building, which was thoughtfully re-designed by local architect Bruce Wydeven, whose spouse, ceramicist Ann Morey-Wydeven, maintains a space there.

Generous in his praise of Bauman, Steve notes that the art incubator they created has logged thousands of volunteer hours since opening three-years ago. The light-filled interior spaces are professionally equipped to handle the diversity of artists who create the upbeat environment where studio space is available in exchange for specified hours of community service. Additionally, the participants have gallery space for hanging their work and/or viewing the exhibitions of visiting artists, both international and local. From an artist’s perspective, what could be better than having access to a print shop, a room of donated and re-conditioned computers, a place to make paper, and a big open area replete with a kitchen and chairs aplenty to read and exchange ideas?

Keeping a non-profit on track depends on a dedicated board, donors, and grant-givers that want more than their names listed on a sheet of paper. Board President Brian Kilb, a white shirt kind of guy who digs spreadsheets, is a financial planner with Landaas & Company. His want list includes more parking for the hundreds who turn out for Gallery Night & Day, though if no major events are happening, there is ample nearby parking with no meters in sight.

Vande Zande believes leadership is equal parts honesty and transparency, though the perseverance and diligence he learned as a youngster has helped. Go to www.redlineartmke.org/ for the big bold picture of what drives this repurposed building.

The Gallery is Filled with Vibrant Pieces by MIAD Professor Fahimeh Vahdat. Photo by Grace Fuhr.

“RedLine,” he says, “is one of the only places in Milwaukee where you can do three things under one roof: see artists working in their studios, view a finished show in the gallery, and have the opportunity to produce artwork while you’re here.” Not to mention that it helps keep Vande Zande busy and creatively fulfilled.

It’s a long way from playing “Ghost in the Graveyard” as a kid in Ripon.

0 thoughts on “Profile: The Man Behind the RedLine”