How To Avoid Getting Ticketed or Towed in Snowstorm

All the cars making short trips in the city make snowplowing difficult. Try walking or biking.

By Dave Schlabowske, Bike Federation of Wisconsin - Dec 20th, 2013 02:27 pm
Get a daily rundown of the top stories on Urban Milwaukee 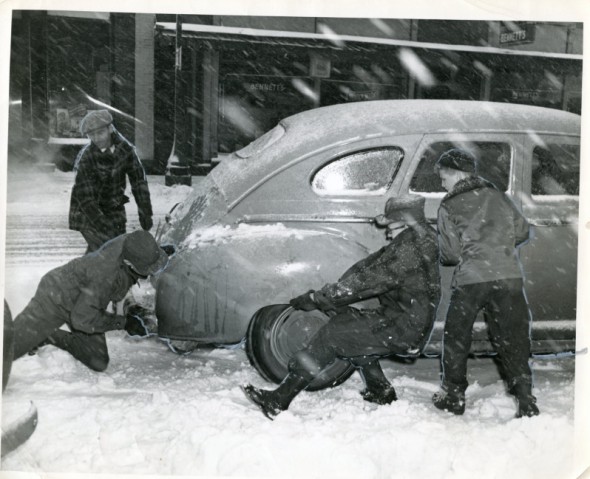 Passing good samaritans hop of their bikes to help push a car out of the snow.

A friend of mine (who is a pro-bike guy) recently wrote this open letter on Facebook in response the ticketing and towing during Milwaukee’s recent snow emergency:

Dear City of Milwaukee.
On this wonderful snowy Holiday, please refrain from ruining the days of hundreds of families’ by stealing their cars before they are due for work in the morning. I understand that you are desperate for revenue… but… for real…Its snow!

Others in the thread suggested someone do a study to prove the lost revenue from people missing work because their cars were towed outweighs any revenue the City might gain from tickets. While I sympathize with anyone who was ticketed or towed, I couldn’t help but bicycle advocacy bomb his thread with this response:

Someone already did that study. His name is Donald Shoup, and his book is an 800 page long tome called The High Cost of Free Parking. After his exhaustive study he found out cities drastically under charge for parking and it costs us all a bunch of money, increases our property taxes, causes congestion, etc. Parking is a sacred cow in most US cities, Milwaukee is no exception. We actually subsidize parking even more than most cities. If we spent our money on better transit, better bike facilities and planned for more dense development, it would be way easier to plow and easier for those who have to drive. Too many people drive even short trips (50% drive trips less than 1 mile), which makes it harder for those who must drive.

Cars aren’t bad, they’re just not ideal for urban travel. Even in winter, it is easier to ride a bike for 1-5 mile trips to work or go out in the city ( that covers more than half of all trips made). My family of three drivers has a car, but we don’t use it for those short trips.

Again, sorry to all who got ticketed, stuck or towed. Heck, I got off my bike and helped push a guy stuck in the snow this morning. Just trying to share a very different perspective that is often left unsaid in the US. 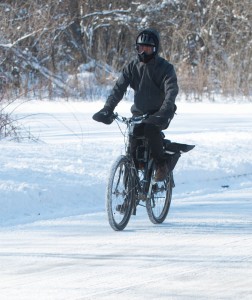 This guy never gets ticketed or towed; never has to shovel out his vehicle; never pays for parking; is warm as soon as he starts pedaling, and if he ever does get stuck in a snow bank, he just climbs over it and keeps going.

In addition to stories about people being ticketed so the snow plows can clear the snow, multi-car crashes on I-94 in Racine made national news after 50 people were injured and one person was killed. News reports said law enforcement and emergency workers from 13 municipalities responded to help in the tragic crash. The Sheriff reported the crash was caused by people driving too fast for the slippery conditions.

We all know snow and ice are part of Wisconsin winters. We all want our streets plowed and salted as quickly as possible to help prevent crashes, but for those who live in neighborhoods with lots of multi-unit housing, street parking is the only place for their cars. Snow emergencies certainly do cause a lot of problems for those folks. Imagine how much easier it would be to park, drive and clear snow if everyone who lives five miles or less from their workplace would walk, bike or take transit?

I have neighbors who literally drive five blocks to work. I know another neighbor who drives three blocks to go out to dinner, and they drink and drive home. With a little preparation, it really is not much more difficult to ride your bike all winter long.

I used to work for the City of Milwaukee Dept. of Public Works. I saw first hand where money was wasted, but I also saw where the city was giving tax payers a tremendous value and doing a great job. Clearing the streets of snow is one of the places the city, county and state get high marks in my book for quality of service and price paid. As long as I stick to the streets, riding my bike to work is typically easy, even after a “snowpocalypse.”  The video I shot above shows just how easy it is to ride most of my 4 mile commute in the snow. Just don’t get me started on the bike lanes or trails, though!

2 thoughts on “Bike Czar: How To Avoid Getting Ticketed or Towed in Snowstorm”