By Dave Schlabowske, Bike Federation of Wisconsin - Dec 13th, 2013 09:36 am
Get a daily rundown of the top stories on Urban Milwaukee

For the last seven years Milwaukee and Madison have been at the forefront of a trend in which Americans are driving less and choosing instead to ride bikes, take transit and walk. At this point we don’t know for sure if the trend will continue as it is likely caused by a mix of the recession and changing demographic preferences as the baby boomers age and preferences of Millennial drivers have a greater impact. A number of recently published comprehensive studies suggest that as revenue from the gas tax drops, we might want to align our transportation policies more closely with our revenue stream, putting an end to ever-expanding highways and investing more in other modes according to changing national preferences.

According to Transportation in Transition, by U.S. Public Inerest Research Group, the Milwaukee and Madison urbanized areas saw the second and third largest drops in per-capita Vehicle Miles Traveled (VMT) in the nation: down 21 percent and 18 percent respectively. At the same time, the number of people reporting they bike to work increased 280 percent in Milwaukee and 219 percent in Madison. The data for the report came from the Federal Highway Administration’s Highway Statistics and the annual American Community Survey. 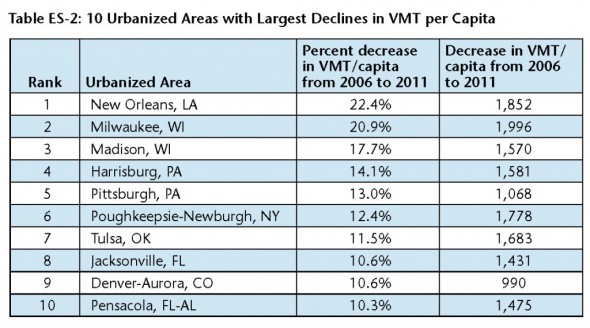 Milwaukee and Madison are among the national leaders in the decline of vehicle miles traveled. Table from U.S. Pirg Report TRANSPORTATION IN TRANSITION

This data from the American Community survey shows the long rise in number of people bicycling in Milwaukee and Madison. Click the image to open a larger PDF that is easier to read. 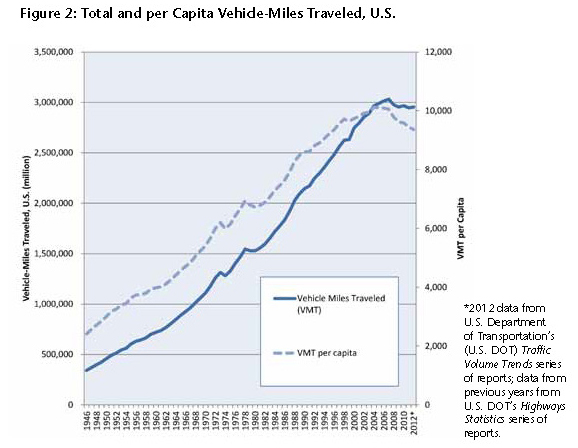 This chart shows that miles driven per capita has been on the decline since 2005.

While the decline in driving has been widely reported because it has reduced the amount of gas taxes collected, which has forced states to shift general fund taxes into the transportation fund (Wisconsin transferred $133 million) and increase bonding, or borrowing to build and repair roads and highways (which Wisconsin also did in our current biennial budget). 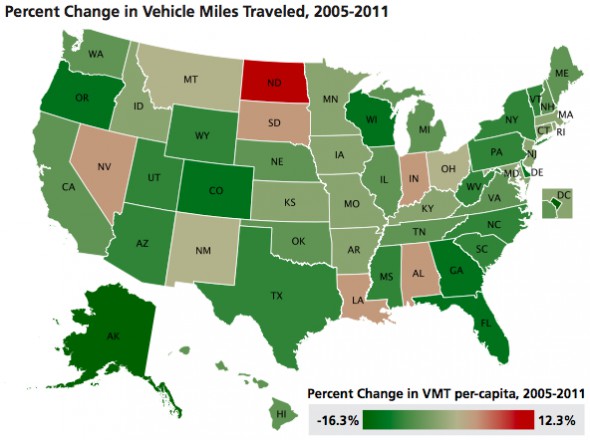 This map shows some of the states least effected by the economic slowdown still showed big declines in driving. “Moving Off the Road A State-by-State Analysis of the National Decline in Driving,” by U.S. PIRG Education Fund

Ironically, this transportation funding crisis is often cited as a reason to cut spending on bicycling and transit. That might not make any sense to you if you are one of the many people who is riding your bike more or taking transit more often. It defies logic that our elected leaders would cut funds to bicycling and walking if they are growing in popularity. It makes little fiscal sense to borrow money to continue widening freeways that are getting less use when small investments in bicycling and transit have proven to have such a high return. 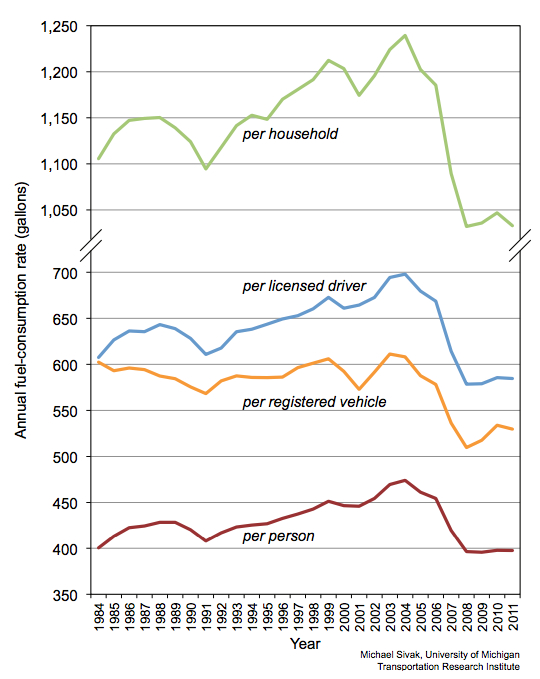 The recession clearly had a big impact on driving, but studies show states least effected by the economic problems showed some of the biggest declines. What if the driving boom does not bounce back?

A common reason given by elected officials and transportation officials is that they believe the decline in driving is related to the recession and will rebound any day now. With such a long history of Americans driving more every year, and the decline coming after the recession, on face value that is a logical assumption, but  this report looked very carefully and found no clear relationship at the state level between the health of the local economy and the size of its decline in driving.

So what happens if the report is right and people continue to drive less? Wisconsin is making huge investments in Mega Freeway Projects that will cost us billions to rebuild our freeways for increased capacity that may never come. Not only will that be a huge waste of precious tax dollars now, but those bigger, wider, taller freeways come with an even bigger maintenance cost for future generations. With no appetite for higher gas taxes or tolls, we seem to be putting our children on the road to ruin.

Whether people continue to drive less or we begin to drive more, our current transportation funding system is not sustainable. We cannot afford to even maintain what we have without raising more revenue. The report makes this fiscally conservative, logical recommendation:

“Local, state and federal officials need to revisit their current transportation plans and transportation investment priorities in light of the recent changes in driving patterns. By doing so, decision-makers will be able to save money that might otherwise be wasted on unnecessary boondoggle highway projects and instead invest in other important priorities such as repairing our existing roads and bridges and expanding access to the broader range of transportation options – including public transit, bicycling and walking – that Americans increasingly seek.”