The History and Future of Santa Rampage

Could event become a victim of its own success? Organizers consider changes in format.

By Dave Schlabowske, Bike Federation of Wisconsin - Dec 6th, 2013 10:57 am
Get a daily rundown of the top stories on Urban Milwaukee

Thirteen years ago when I started Milwaukee’s Santa Cycle Rampage, I only knew a handful of people outside of professional couriers who rode their bikes for transportation in the winter. If I saw someone I didn’t know biking through the snow, I emailed the small group of year round commuters to let them know about the sighting. I started the Rampage after seeing Chicago had a similarly titled ride as part of their Bike Winter events. I thought a Milwaukee version would encourage more people to see how easy it is to ride in the colder months, and to reward the few who already did with a fun event. 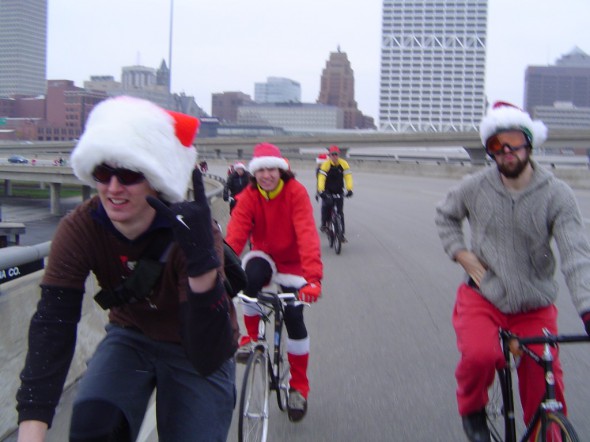 The group of Santas on one of the very first Santa Cycle Rampage rides.

That first year I think there were another six or eight people on the ride and they were all personal friends. We were naughty Santas and rode over the Hoan Bridge (still illegal sadly). Because there were so few of us, the small group could stop at any cafe or tavern we wanted and get served. More than a decade later, the ride has grown to more than five hundred holiday merry makers, and people come in from other states to do the ride. This year, for the first time, the ride was a fundraiser that generated more than $5,000 for the Bike Fed, thanks to the generosity of the bike-friendly stops on the ride. 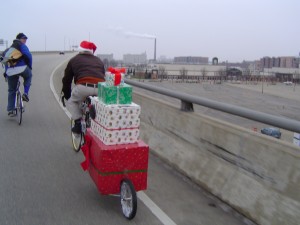 There were not as many full red suits, but even on the early rides Santas were creative. The presents in the B.O.B trailer are a sound system.

Now thousands of people ride bikes year round in Milwaukee. While the big group obeys the traffic laws, it is inevitable that hundreds of Santas on bicycle will cause some traffic delays. We try to minimize that by sticking to streets where the Santas can ride in one lane and leave another lane open for traffic to get by. The vast majority of people in cars love to see the group ride by. It is the only time you hear people honking at you on your bike and you can be pretty certain they want you to wave to them.

All-in-all, the Rampage has been a huge success getting more people out riding and promoting bicycles as good for business. I certainly don’t take full credit for the success of the ride or the growth in year-round bicycle commuters in Milwaukee, but part of me is pleased  that this event has helped get more people to try riding a bike in the winter. Another part of me is nervous that someone is going to get hurt on this ride.

The Rampage started as a pub crawl with a lot of riding. We spent more time pedaling than drinking while going to little local taverns from the far north side to the far south side. We started early, rode for a long time, stopped for lunch, then hit a couple more pubs and were safely home by mid afternoon. It is now so big that  we can only go to really big taverns and cafes and have to use Turner Hall for the final stop. I think part of the mass appeal of the Rampage is the short distance and the super cool, super bike friendly stops we make.  We didn’t have places like the Cafe Hollander, a Belgian-style bicycle themed grand cafe, when I started the ride.

While I still recognize many faces on the Rampage, with so many people riding and drinking, the group is too big to self-police alcohol consumption and it seems inevitable that someone will get hurt. I know enough to pace myself for a long day. I don’t have a beer at every stop. The overwhelming number of Santas are conscientious, but there are Santas who have never been on the ride pedaling in from all corners of the city. Many of them start at a neighborhood place in addition to the handful of official stops and they then have a long ride home after a day of more drinking than riding. 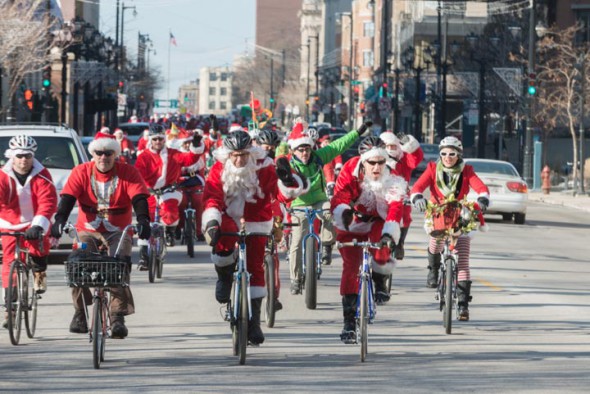 More than 100 West Side Santas head down Wisconsin Avenue to rendezvous with the other Santas at Lakefront Brewery.

When people ask me how long the ride is, I say that Santa drinks milk and cookies at the home of every boy and girl in one night because he has magic reindeer and a sleigh.  People without similar means of conveyance should probably not try to partake in the offerings of every stop on the Rampage. It is kind of like going to a Packers game. People get there early, tailgate, go to game, tailgate some more and then drive home.  The vast majority of Packer fans are responsible, pace themselves or have a designated driver. I know some don’t and that is not the responsibility of the Packers to police adult behavior. The Packers are not going to stop letting people tailgate because some people don’t drink responsibly. 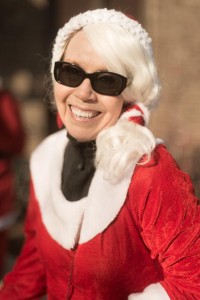 It is my hope that the Rampage will continue to grow and get so big that it becomes more of a Santa Rampage Day with coffee shops, cafes, restaurants and taverns across the Milwaukee area offering treats to holiday revelers who show up in costume and on two wheels. People will then just hit a few places near where they live, make up their own rides, go home in the early afternoon to take a good winter nap and meet at the end of the day for a final party with a band.

Another idea would be to have an official Santa Rampage bicycle parade and then let people go to neighborhood Rampage stops after this. Click here to see a nice (short) video of a fun holiday bike parade they do in Appleton.  I imagine something similar to this, but during the day with 500+ Santas.

Next week a bunch of the long-time Rampagers and owners of the stops on the Rampage are getting together to debrief about the event. We all agree it is a huge success as a fun ride, as bicycle advocacy, and now as a fundraiser. The Rampage now has a life of its own and like the Packers, we can’t control what adults choose to do, but we want to be thoughtful and encourage this event to grow in a safe and healthy way.

If you have any ideas on how we might reformat the Santa Cycle Rampage next year, put your ideas in the comment section below.

More on the Santa Cycle Rampage:

9 thoughts on “Bike Czar: The History and Future of Santa Rampage”