The Governor as Grinch

Political candidates and officeholders seem to go to great lengths to make their incessant money pitches timely. But Scott Walker’s fundraising professionals seemed to have let the holiday season cloud their judgment in a request for money for their candidate.

The message: forget toys for the kids. Invest your children’s future in Scott Walker. After all, he has.

“Instead of electronics or toys that will undoubtedly be outdated, broken or lost by the next Holiday Season, help give your children a gift of a Wisconsin that we can all be proud of,” the appeal, signed by Taylor Palmisano reads.

The Walker campaign instead suggests that we “Donate $5, $10 or $25 to help Governor Walker get re-elected and save your children from a future of double-digit tax increases and billion dollar budget deficits.”

Walker had two reasons why he never stopped fighting for Wisconsin during the recall effort against him, according to the solicitation: “his sons Matt and Alex.”

Won’t they be delighted on Christmas morning to find a stocking stuffed with letters reading, “a gift in your name has been made to the Committee to Re-elect Scott Walker?”

The campaign fundraising letter written by Palmisano, Walker campaign’s 23-year old deputy finance director, is not her only error. She was just fired from her position on Tuesday, after tweets demeaning Latinos back in 2011 were found on her Twitter account, according to a report by Dan Bice in the Milwaukee Journal Sentinel. No, this sort of fare will not help Walker and the Republican Party to build their appeal with Hispanic voters.

The UW – Madison Police Department used a security camera image to help nab an unlikely suspect in the theft of a painting from a UW Union gallery. The thief, a 66-year old woman named Hildegard Neujahr, claimed she only took the painting to show it to her decorator to help select a color scheme for her home. A police press release said Neujahr thought her actions were okay since she believed the painting was the work of a student.

Of course, this is nonsense. The university says the work is not that of a student, and that the “valuable” painting is worth $700.

But unlike most art theft press releases, there was no image of the stolen work, no title of the painting, and no name given for the artist.

According to Marc Lovicott of the university police: “At this time, we are unable to release any information about the painting that was stolen, the artist, etc.  Because this is a misdemeanor theft case, we can’t release any more details until the suspect’s initial appearance. Since a court appearance is required, the court gets the opportunity to review the case documents before the public does. After that, I can release everything.”

Ms. Neujahr might need the decorating tips from her stolen painting to freshen things up at her home, a 4,300 square foot Tudor in Madison valued at $836,000. The home is listed in her name and that of her husband, real estate developer Thomas Neujahr.

However, things could be getting a bit lonely in the manse for Ms. Neujahr, since she filed for divorce from her husband in April, and the case is still open.

Hildegard Neujahr served on the State of Wisconsin Group Insurance Board  of the Department of Employee Trust Funds in 1989. She was appointed to that position by then-Insurance Commissioner Robert Haase. 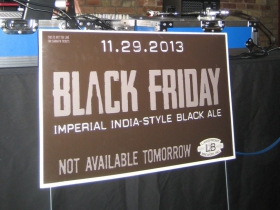 Black Friday, November 29th, was a momentous one at Lakefront Brewery. Last year, on a lark, owner Russ Klisch decided to offer — for one day only — a beer called Black Friday. He sold out of 1,500 bottles then, and a new holiday tradition was born in Milwaukee. This year he tripled production, and the brewery was jamming all day long. As usual, but for the last time, at 4 p.m. the beer tours gave way to the Friday fish fry at the brewery operated by Russ Davis.

This dual operation has always been a difficult thing for visitors and staff, as tour-goers would find themselves shooed away from the bar floor at 4 p.m., when dining tables would be rolled out for the fish folk. 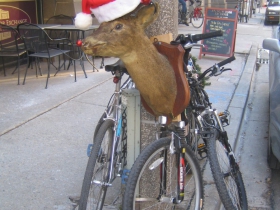 However, after a few weeks of remodeling the fish fries will be back, this time under complete control of Klisch. And no more getting thrown out at 4 p.m. He will rename the room the Lakefront Beer Hall, and will run the operation himself. The change will allow Lakefront to run tours as late as 7:30 p.m., and presumably will greatly simplify the operations of the brewery. Davis will continue to operate the Rio West Cantina in Riverwest and the Crab Shack on W. Canal St. … On Saturday, November 30th, 2013, Lakefront was one of the stops on the Santa Rampage, yet another new holiday here in Milwaukee. The rampage started a couple of years ago with a number of Santas enjoying a bicycle ride through the city. This year was its greatest yet, and Santas could be seen all over town, some with decorated bikes, like this mounted deer cycle parked outside the Swingin’ Door Exchange, 225 E. Michigan St.

Milwaukee Courier Company, a local bicycle messenger firm, has moved into an office in the Blatz. Owner Stephen Feih also says he is involved with Zipments, a new mobile app that provides delivery upon demand to those with smart phones. This may be the key to expanding bicycle delivery to home accounts. As the years have gone by, and as electronic filing has become commonplace in courts (the principal business of messengers), such outlying business will be vital for the future of the industry. Another untapped market: bank deposits for retail businesses, he says. … 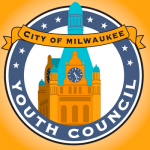