Saturday is the ribbon cutting for bike/pedestrian trail from 124th east into the heart of West Allis.

By Dave Schlabowske, Bike Federation of Wisconsin - Nov 22nd, 2013 02:23 pm
Get a daily rundown of the top stories on Urban Milwaukee

West Allis City Engineer Peter Daniels emailed me, excited to announce there will be a ribbon cutting at 10 a.m. this Saturday, Nov. 23rd, for their new Cross Town Bicycle and Pedestrian Trail. I am sorry to miss the official opening (I will be slaying Buckzilla in Ashland County). I remember writing a letter of support for the grant application when I worked for the Bike Fed, before I went to the City and then came back to the Bike Fed! I think this project has been on the drawing boards for something like 10 years.

The ribbon cutting will be held at the South 116th Street trail crossing, between W. Greenfield Avenue and W. Rogers St. (Adjacent to the Union Pacific Railroad overpass bridge) 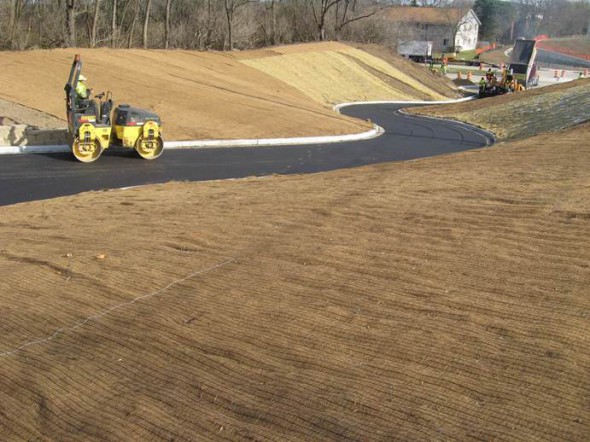 The ramp going down to 1116th Street.

The first segment on the multi-phase trail is paved between 124th Street, at the end/start of the the New Berlin Recreational Trail in Greenfield Park, east to Highway 100, where the trail goes back down to grade. The bridge over HWY 100 will be the next phase of the trail to get constructed and is planned for 2015. These ramps to connect trails to the street grid are critically important.  I am glad to see that connection as the Hank Aaron State Trail was constructed with no connection to either 84th or 92nd Streets, both major arterials. 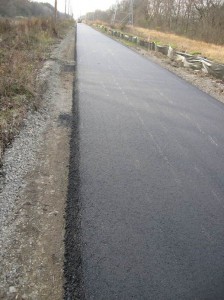 Linear trails on former rail lines that run past neighborhoods and over busy streets should be constructed to maximize access. Without those formal connections, people are forced to use desire-line “goat paths” and the investment in the trail is not maximized in terms of users.

Too often trails, particularly rail trails, are viewed by the civil and traffic engineers who design them as linear recreational routes from point A to B that bypass or miss important connections to the street grid and other trip generators. No road or highway would ever be constructed without access to major arterials; trails shouldn’t be either. Three cheers to Pete and West Allis for making this connection.

In addition to writing the letter, I remember reviewing the plans after West Allis was awarded the grant. At the time we discussed the problems they were going to face dealing with the railroad, given one of the proposed crossings is near a curve over an elevated main line track that still gets heavy use. Due to those problems the final phase has run into numerous road (trail?) blocks from Union Pacific RR and WisDOT. As a result, there will be a somewhat convoluted detour around the Union Pacific tracks and under the new Zoo Interchange bridge at I-894.  Since the construction of the Zoo Interchange bridges will not be done until 2017, that connection may not be completed until 2018, around the same time the Hank Aaron State Trail will reopen. 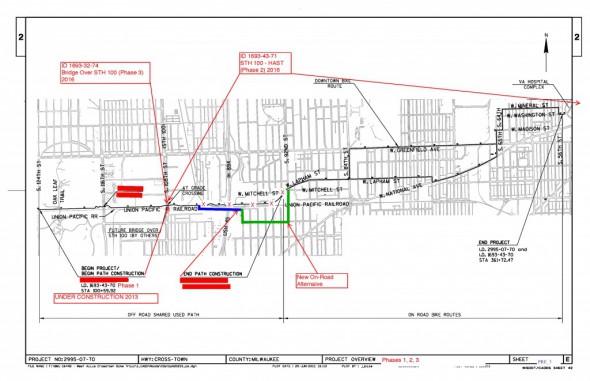 Click to open a PDF with a larger view of the map.

It is also important to note that with this trail, the city of West Allis has gotten into the trail game. For decades the Milwaukee County Oak Leaf Trail (originally called the 76 Trail) was the only municipal trail in Milwaukee County. Then the city of Milwaukee got into the trail business with the Beerline Trail, and more recently the KK River Trail. It is nice to see cities putting in trails, rather than relying on counties or the state. It will be interesting to see how well both Milwaukee and West Allis clear the trails of snow and ice.