By Bill Lueders, Wisconsin Center for Investigative Journalism - Nov 12th, 2013 09:50 am
Get a daily rundown of the top stories on Urban Milwaukee 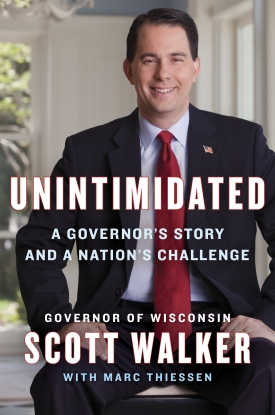 “Unintimidated: A Governor’s Story and a Nation’s Challenge.”

Gov. Scott Walker’s new book, “Unintimidated: A Governor’s Story and a Nation’s Challenge,” has been faulted for what it omits. Attention is also due to what it delivers: A vast portal into the mindset of Wisconsin’s most controversial politician.

The book, co-written by conservative scribe Marc Thiessen, provides ample ammunition to both Walker’s admirers and his detractors, often in the same passages. Such as when Walker, reflecting on his sweeping changes to collective bargaining, says “the union bosses … were the only ones who would get hurt in the entire process. Which was fine by me.”

Fans will applaud his righteousness. Foes will decry his dismissal of the sacrifices extracted from hundreds of thousands of public workers.

With a Nov. 19 release date, in time for Christmas and the next presidential election, “Unintimidated” is a work of unapologetic self-promotion. Walker lays claims to his status as a national leader and a politician of extraordinary courage — both undeniably true.

But Walker more than makes up for such omissions with his blunt candor in the rest of the book.

He dubs collective bargaining “the enemy of good government” and says he wanted to eliminate public employee unions entirely, but was constrained by his fellow Republicans. He accuses local government officials of succumbing to Stockholm syndrome, willing to betray taxpayers to appease “their captors,” the union bosses, who seek only to maintain the “protection racket” that pours cash into their coffers.

The protesters who flocked to the Capitol, elsewhere praised for general good behavior, are here portrayed as spewing obscenities, spitting on lawmakers and stinking up the joint.

At one point, Walker tells how he cheered his staff by sharing a conservative website’s top 10 list of signs “you might be a member of a public-sector union.” These included: “You get paid twice as much as a private-sector person doing the same job but make up the difference by doing half as much work.” “You know by having a copy of the Holy Koran on your desk your job is 100% safe.” And “You have a Democratic congressman’s lips permanently attached to your butt.”

And, after all this, the governor insists, “we always took the high road and never contributed to the hostility and the rancor.”

Walker notes that his campaign raised $37 million to fight the recall, but not that most of this came from out of state or that he and his supporters outspent their rivals nearly three to one, according to the nonpartisan Wisconsin Democracy Campaign.

In the Senate recalls, Walker says his side raised $12.5 million only to see “the unions” raise $25 million.

But WDC research director Mike Buelow says Senate recall candidates and all outside groups — not just unions — spent $23.4 million on Republicans and $27.2 million on Democrats.

Walker’s spokesman deferred comment to the book’s publisher, Sentinel. Its publicist, Jacquelynn Burke, says the Senate numbers are from “interviews with GOP campaign operatives” who estimated spending at the time, not “a comprehensive listing like the one generated by WDC” after the elections.

Burke says the $8 million figure was based on “an article that did not fully distinguish that it was total spending for both sides.” In other words, it’s not correct.

Walker’s book sets forth leadership precepts including “Own up to your mistakes.” In these particulars, and perhaps others, “Unintimidated” gives him fresh opportunities to lead.