The Joys of BikeShare

As more cities add BikeShare, I no longer need pack a folding bike. Travel for bikers is so much easier now.

By Dave Schlabowske, Bike Federation of Wisconsin - Nov 8th, 2013 10:25 am
Get a daily rundown of the top stories on Urban Milwaukee

I’m beginning to sound old, but in the old days, when I was taking a train or airplane to another city, it was a big decision whether I would bring my Dahon folding bike, rent a bike, or borrow one from a friend in my destination city. I typically ride my bike to the airport or train station, and once I get to my destination, I would need a bike to get around. Because airplanes charge so much to bring a regular size bike, and Amtrak makes you box a regular size bike, this meant bringing my folding bike since it travels free in normal baggage.

I modified a regular suitcase to function as a trailer using Burley jogger wheels and some parts from the hardware store. I put my clothes in the suitcase trailer on the way to and from the airport or train station. To get the bike on the train or airplane, I take off the wheels, fold it up and pack it in the case.

I modified a regular suitcase to function as a trailer using Burley jogger wheels and some parts from the hardware store. I put my clothes in the suitcase trailer on the way to and from the airport or train station. To get the bike on the train or airplane, I take off the wheels, fold it up and pack it in the case.

The Dahon is small, but to make it fit in a regulation suitcase, it requires that I remove the wheels. I also had to build a special trailer, since none of the productions bike trailer/suitcases meet the new airline dimensions for regular size baggage. That size fluctuates a bit depending on the airline, but generally it is a total of 62″. Go over that and you might pay an extra $100-$200 dollars. 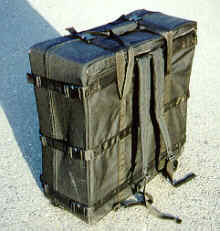 S&S backpack travel case is 26x26x10, but draws unwanted attention at the airport.

My Waterford with S&S Couplers fits in a backpack that is  say 26″x26″x10″, which just makes it, but the pack does not look like a regular suitcase, and the ticket agents often ask what is inside. Once I say a folding bike, the can of worms is open and I have to start arguing about extra fees to bring a bike on the plane. It is worth it to argue if I am going on an extended touring trip and really want to ride a full-sized bike that fits me like a glove, but it is not worth it if I am going to a 3 day conference in Washington, DC or just to visit friends in Chicago. The Dahon is ideal for those situations.

Regular readers may remember that back in June, I traveled Amtrak to Chicago to see my brother play. He is a musician in the band “The Waco Brothers” who lives in Austin. For that I rode my my Dahon to Amtrak, folded it up, dropped it in the baggage bin inside the train and do the reverse once I arrive at Union Station. It works slick.

This trip down to see my bro, he and I were staying with friends who were driving him back from the show at the club Wire in Berwyn. The Dahon is small, but I wasn’t sure if it would fit with my brothers gear and four of us in our friends small car. Then I remembered: DIVVY had arrived! Divvy is the new BikeShare system in Chicago. For $7, I could get a 24 hour pass on Divvy and skip the whole folding bike thing. 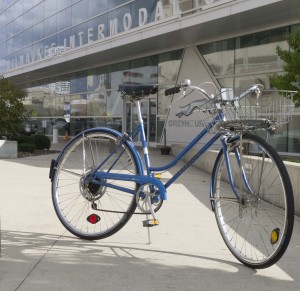 I love our old Schwinn Suburan, but it is the perfect bike to leave locked up outside over night at the train station.

So this time, I rode my old Schwinn Suburban down to the Intermodal Station in Milwaukee, locked it up outside and hopped on Amtrak with my toothbrush in my pocket and no other baggage! That is really traveling light!

I had downloaded the iPhone app for Divvy, so once I got our of Union Station, I walked a block to the nearest Divvy station at Adams Street, slid in my credit card and 2 minutes later I was pedalling off to our friends house near Milwaukee and North. Again, there was a Divvy station on the other side of the street from where they lived, so it was super convenient. Chicago has a pretty good transit system, but when you factor in waiting for a train and transfers, Divvy was way faster than Metra, the El or the bus. 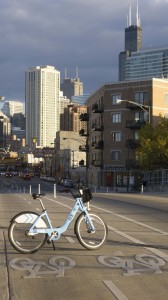 My Divvy bike in the new protected bike lanes on Milwaukee Avenue in Chicago.

With all the cities getting BikeShare now, I have considered getting rid of my of my folding bike. But I’m going to keep it to use the times I am going out in Milwaukee with friends who don’t ride bikes. It makes it easy to from work to meet them downtown, toss my bike in their trunk, and take their car to dinner and a movie without uncomfortable conversations about meeting people places and trying to work out timing.

Bike riders are always bragging about how light their bikes are, but how about how light you can travel in general? Car + bike rack + bike + humans = a heavy load. Remove the car, the bike rack AND the bike, but still have access to a BikeShare bike, and we are talking Tour de France lightweight travel. Everywhere I have used it, BikeShare has been easy to use, super convenient, saved me a lot of money and allowed me to experience my destination city by bicycle. If you haven’t tried it, I highly recommend you try to shed some serious travel pounds on your next trip.