People were down by the river watching the salmon run in the river up to where the concrete lining was removed up to the 6th Street Bridge. Photo by Dave Schlabowske.

Recently, the National Resources Defense Council (NRDC) released an update to our 2011 report Rooftops to Rivers II, which shows how, in just two short years, cities and regions of all sizes are using green infrastructure to manage their stormwater and revitalize their communities.

MMSD’s efforts are worthy of special note: with approval of its Regional Green Infrastructure Plan, MMSD becomes the second city or region in the nation to achieve all six of NRDC’s Emerald City criteria identified in Rooftops to Rivers II. The plan identifies a goal of capturing 740 million gallons of stormwater per rain event and lays out a systematic approach to achieve that goal. MMSD underwent a detailed data analysis to identify the opportunities and constraints to implement green infrastructure strategies in seven watersheds in its service area; the process included the collection, creation, and analysis of data such as impervious area, soils, land use, property ownership, groundwater, topography, tree canopy, and separate/combined sewer areas. 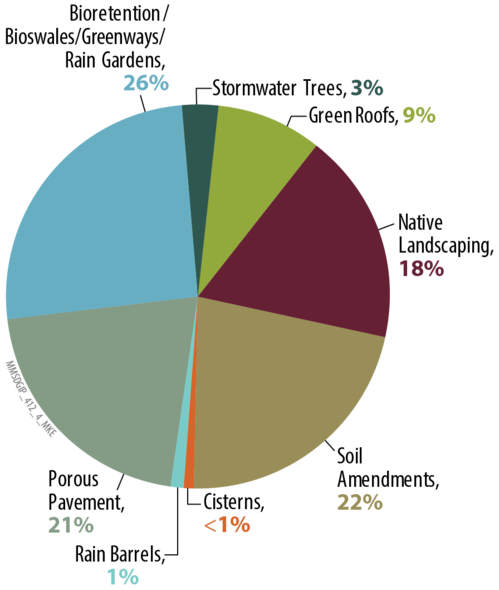 Unfortunately, the innovation and progress we’re seeing in Milwaukee (and 19 other cities profiled in Rooftops to Rivers II) is not being matched by our federal leaders, specifically the EPA. The EPA has missed multiple deadines to propose new rules to curb stormwater runoff that would incorporate lessons learned from places like Milwaukee. EPA certainly recognizes the value of green infrastructure, which helps stop runoff pollution by capturing rainwater and either storing it for use or letting it filter back into the ground, replenishing vegetation and groundwater supplies.  In fact, EPA just released a series of case studies analyzing the economic benefits of green infrastructure strategies, which includes the MMSD’s efforts.

And, while EPA’s inaction on stormwater doesn’t stop innovative leaders like those at MMSD from moving forward, it does make it a whole lot harder for other cities and municipalities to fully integrate green infrastructure strategies.  Consider two of the projects MMSD has underway to not only implement its Regional Green Infrastructure Plan, but better protect communities from flooding and improve habitat at the same time:

MMSD is one of leaders on green infrastructure deployment, but they’re not alone, as Rooftops to Rivers II and today’s update demonstrates. We need that same leadership from EPA, which is why NRDC continues to work with citizens and organizations across the country to demand that EPA issue new standards that will allow everyone in America to enjoy the benefits of green infrastructure and clean water.