Loss of 19,000 students since 2003 and recent decline in its charter schools pushes revenue downward.

By Edgar Mendez, Milwaukee Neighborhood News Service - Oct 29th, 2013 10:02 am
Get a daily rundown of the top stories on Urban Milwaukee 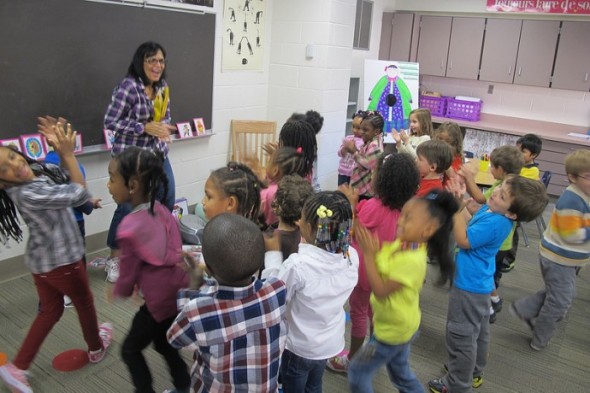 Despite the benefits to Milwaukee Public Schools of authorizing charter schools, MPS is currently chartering 29 schools, nine fewer than it did two years ago, while the number of independent charter schools in the city continues to rise.

Although MPS enrollment increased slightly this year, up by 41 students, over a nine-year period from 2003 to 2012 the district lost 19,000 students, an average of 2,110 a year (See Charter school enrollment growth, 2003-2012). Many of these students are now enrolled at independent charters and some at private (“choice”) or suburban schools.

Tagliavia said the decrease in the number of MPS-authorized charters is the result of mutual termination of charter contracts, one non-renewal, and MPS charter schools reverting back to traditional schools. 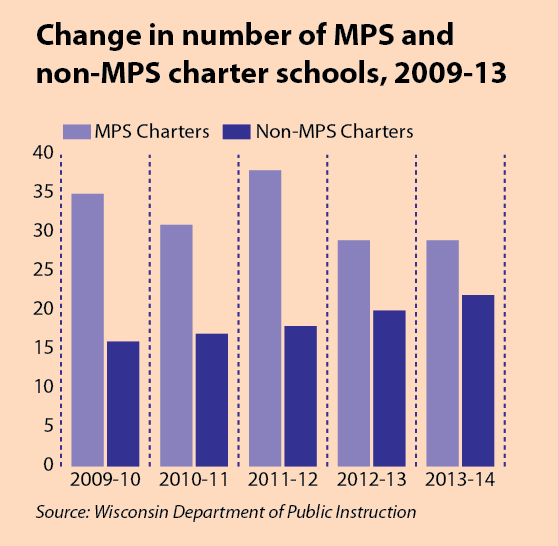 Change in number of MPS and non-MPS charter schools.

As for the students who leave, “we are not able to fully adjust for that loss,” Tagliavia said.

He explained that legacy costs — such as retirement benefits for staff — remain the same regardless of the number of students the district serves. In addition, MPS pays for busing non-MPS students.

MPS would benefit from opening more charter schools and getting the funding associated with the increase in students, according to Christian D’Andrea, education policy analyst for the MacIver Institute, a conservative Wisconsin-based think tank. Per-pupil state aid to MPS schools is $6,442.

New charter schools go through an application process that differs by authorizer. Schools are free to apply to any of the authorizing bodies, including MPS.

Data reported by the Wisconsin Department of Public Instruction (DPI) show that on average independent charters outperformed MPS schools, including charters, during the 2012-13 academic year, although 53 percent of the independent schools tested did not meet expectations. Only 40 percent of MPS-authorized charter schools fell below expectations, but data were unavailable for eight schools.

Tagliavia said MPS only seeks out new charter schools that have successful models and offer an innovative approach that meets a need within the district’s portfolio of schools.

The recently opened Banner School, an MPS charter, is one example. The middle school is part of the Banner Educational Group, a national education management association. Middle schools are rare in MPS.

From 2003 to 2012, enrollment in independent charters increased by nearly 4,000 students, according to DPI data. Statistics showing how many of those students left MPS are not available. MPS charter enrollment increased by only 1,653 students in that period, even though MPS has more charter schools.

Maureen Sullivan, principal at Woodlands East, a recently opened UWM charter school, is not surprised that MPS is losing students to schools such as hers. The new school, at 3121 W. State St, is the second Woodlands charter authorized by UWM. The original Woodlands school is located at 5510 W. Bluemound Rd.

Sullivan said schools such as Woodlands East are providing better options for students, adding, “If you did a really good job, children wouldn’t leave,” referring to MPS.

She said many independent charters enter the market touting innovation and diversity, but that MPS charters provide the same benefits, in addition to better services, including special education, more qualified teachers and bilingual programs.

“We need to do a better job of getting into the communities and promoting all the positives our charter schools have to offer,” Joseph said.

However, Joseph said, opening more charters in not the solution. She said the focus should be on creating better opportunities for MPS students and improving the quality of schools in general.

While MPS-chartered schools decreased 20 percent, from 35 to 29, between 2009-10 and this school year, the number of city-authorized charters doubled, from five to 10. Part of the reason could be the proactive approach city leaders have taken in recruiting successful charter school operators to the city. 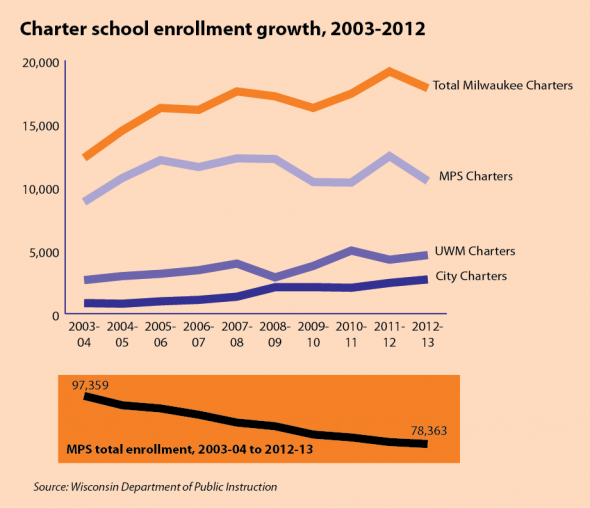 For example, Mayor Tom Barrett and Common Council President Willie Hines flew to California in 2011 to see the Rocketship schools, run by Rocketship Education, a network of public elementary school charters. The Common Council approved the first Rocketship school in November 2011, and voted to allow the network to open up to eight K-5 schools in Milwaukee. Rocketship Southside Community Prep School opened this year at 3003 W. Cleveland Ave.

Despite the numbers, MPS has been quite active in seeking out new charters, said Alan J. Borsuk, senior fellow in law and public policy at Marquette University.

He cited authorization of the Universal Milwaukee Charter School, run by Universal Companies in Philadelphia and the 2011 opening of a new Milwaukee College Prep campus as evidence of MPS’s efforts to regain students.

Still, in years past, Borsuk said, “they (MPS) were chartering lots of schools and weren’t proving anything.”

D’Andrea noted that the district needs to convince MPS parents and students that their schools are effective. “They need to increase the quality of education if they want to increase their enrollment.”

One thought on “MPS Funding Continues to Decline”