While the Menominee wait to hear if they can build a casino, the Potawatomi Casino Hotel is moving toward completion.

Although the Menomoniee tribe had been expecting Gov. Scott Walker to make his decision on the proposed Hard Rock Casino in Kenosha today, that decision will have to wait. If approved the Menomoniee plan to have the casino operating out of the former Dairyland Greyhound Park within 90 days, while preparing to begin construction on an $800 million casino and entertainment complex. Walker has deferred his decision until next week though, pending further review of the proposal.

The Potawatomi and Ho-Chunk tribes, which both operate casinos in Wisconsin, remain in opposition to the Menomoniee proposal. The Potawatomi estimate the new casino would decrease gaming revenue by 33 percent at their Milwaukee casino.

While the Menomoniee wait, construction of Potawatomi’s 20-story, $150 million casino hotel is well underway and set to open in the summer of 2014. The project is expected to create 995 construction jobs and 250 permanent jobs when complete.

Our photos show that the glass wall has now risen 10 stories, and reveal details such as the fins, and the large blank wall along the casino’s marquee entryway. 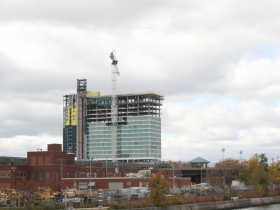 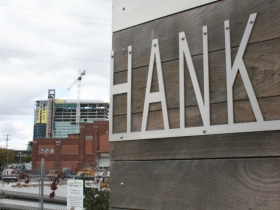 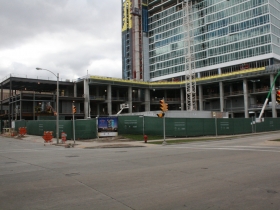 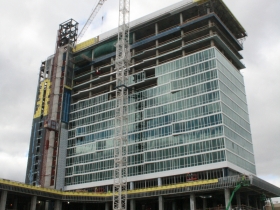 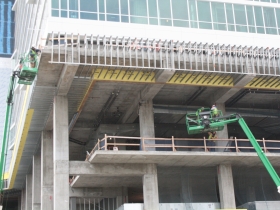