Reacting to a smelly deal involving one school building, legislators are pushing a badly-flawed bill that worsens the problem.

“This deal does not pass the smell test.”

Such was the reaction of Rep. Joe Sanfelippo (R-West Allis) to a presentation to legislators by Milwaukee Public Schools Superintendent Gregory Thornton on why the district sold the old Malcolm X Academy (2760 N. 1st St.) to a couple of developers in a murky, not-very-well-explained deal. For months, the nearby St. Marcus Lutheran School, a successful private school, has been offering to pay cash for the building, but Thornton has resisted selling to them.

Thornton’s decision has provoked understandable outrage. It looks as though MPS is deliberately trying to prevent competitive, voucher-funded schools from expanding. And so Sanfelippo, state Sen Alberta Darling (R-River Hills) and other Republican legislators want to pass legislation that would force the sale of such buildings to choice and charter schools.

There are two problems with their solution. First, the bill is badly flawed: in order to allow competition in the education marketplace, it will greatly restrict competition in the real estate marketplace. But far worse is that it will prevent Mayor Tom Barrett and the Common Council from aggressively seeking the best deals when selling excess school properties. Indeed, it may bring to a halt all such sales.

The reality is that Barrett supports the goal of selling excess school properties and supported an earlier law, passed in 2011, that was intended to force a quicker sale of MPS properties. Barrett’s chief of staff Pat Curley says the mayor was “frustrated with MPS” and concerned that “some of its buildings were sitting empty.”

The 2011 law in essence required MPS to declare some buildings surplus property and allow those properties to be sold through a standard, market-oriented process in which the city (which legally holds the title to all school buildings) would complete the sale.

By and large, Curley says, that process was working. “MPS was making great strides with its facilities plan.” But a procedural problem arose, as Barrett recently explained in a letter to the legislature: “After the bill was passed, we determined that state law still required our City Attorney to represent MPS as well as the City in real estate matters. Therefore, the new law presented a conflict whenever there was disagreement between the City and the District about the sale of a property.” 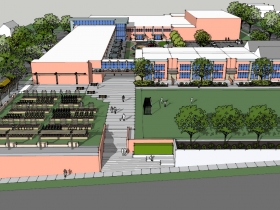 In the case of the Malcolm X property sale, which Sanfelippo says doesn’t pass the smell test, Curley says “we’re not convinced it does either.” He notes that the deal is being studied and “we should have answers in the next few days.”

The simple solution, Curley, says is a technical fix to the 2011 law which would declare that in the case of real estate deals, Milwaukee’s City Attorney represents the city and does not represent MPS (which could choose to hire outside counsel). This would eliminate any conflict of interest and leave the city less constrained in how to sell excess MPS property.

Instead Sanfelippo and company are crafting a bill that would force the district to sell buildings to choice and charter schools, even when they are outbid by other parties. This would prevent the city from getting the best deal it can from potential developers.

One example, Barrett’s letter noted, “is the transformation of the former Jackie Robinson Middle School, a vacant school building in the Sherman Park Neighborhood that had been closed since 2005. Using tax credits, the building was redeveloped and repurposed by Gorman and Company into a senior living center with 68 apartment units and is now a wonderful asset to that neighborhood.”

Another example, the letter noted, “is a housing project that has been proposed by Milwaukee Public Schools in conjunction with the Greater Milwaukee Committee…This proposal would repurpose the former Dover Elementary School in the Bay View Neighborhood into housing for teachers and school professionals. Assembly Bill 417 would put an end to this project by shutting out prospective buyers who are not education operators out of the sales process for 48 months.”

Even worse, the bill essentially commands that the Common Council must approve sales to educational institutions, even if they think it’s a bad deal for the taxpayers. This could kill any possible deal, Curley contends. “You’re not going to get any approval from the Common Council if they feel they are getting stomped on. We don’t think anything’s ever going to get sold under this law.”

The reality is that many of the liberal-versus-conservative conflicts, including school choice versus public schools, break down at the city level. For Mayor Barrett, any good school, whether public, choice or charter, is good for the city because it encourages families to stay in the city. Over the years Barrett has been supportive of all such schools.

The other reality is that an unrestricted real estate marketplace is critically important to the mayor and the Common Council. Simply put, the mayor is in the business of real estate. The more he can drive development, the bigger the property tax base becomes, which is the key to paying the bill for all the services the city must provide for residents.

As I’ve previously reported, the state has slashed aid to the cities in real dollars over the past 20 years, yet prevents this city from levying its own sales or income taxes, something most big cities in America can do. This forces the city to over-rely on the much-hated property tax and leaves the mayor badly constrained fiscally speaking.

As a result, both the mayor and Common Council are greatly concerned about driving the growth of city real estate. They have a much different point of view on this issue than MPS, and don’t need to be forced to sell excess properties.

Why then do Republican legislators so misunderstand the motives of Barrett and the Common Council? It could be a knee-jerk, frustrated reaction to the issue or perhaps s failure to listen to city representatives. Or it could be something much worse, a cave-in to School Choice Wisconsin and other voucher lobbyists who don’t care whether the city’s real estate marketplace works properly and who simply want cheap buildings for the schools they represent.

Whatever the reason, the result is a law that interferes unnecessarily with local control, offering a draconian “solution” to a small technical problem that could easily be fixed. It’s like firing a bazooka to kill a fly.

-Barrett, by the way, has also proposed that legislators include a provision in the case of each school building sold to choice schools that would eliminate the funding flaw that costs city taxpayers for every student that gets a voucher payment. The funding flaw has been eliminated for every other school district in the state but has left a $57 million shortfall in school funding for Milwaukee that the legislature has promised to fix over a 12-year-period. It’s yet another example of how the legislature has fiscally constrained the city.