The bill provides protection for pedestrians, bikers, farmers and others who are more vulnerable in accidents with cars.

By Dave Schlabowske, Bike Federation of Wisconsin - Oct 15th, 2013 02:56 pm
Get a daily rundown of the top stories on Urban Milwaukee 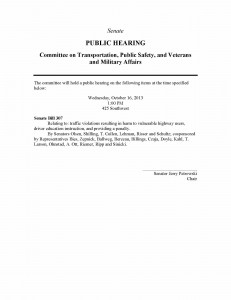 After more than two years of work, we finally have a public hearing set for the Vulnerable Users legislation. The Senate Transportation Committee will hold a public hearing this Wednesday, Oct. 16th at 1 PM in room 425 Southwest of the State Capitol building. The House will hold a similar hearing later in the month, on October 29th.

The Bicycle Federation of Wisconsin feels good about our chances of getting this legislation through committee. We have commitments to testify from representatives from several different vulnerable user groups, including farmers, as well as people who have lost friends or relatives killed by motorists while walking or bicycling.

The goal of getting our Vulnerable User Law passed is to reinforce the idea that when we are behind the wheel of a motor vehicle and sharing the road with more vulnerable road users, we must drive with extra care. When we are passing a farmer in a tractor, that is not the time change the station on the radio. More than 1,400 Wisconsin farmers have been hit by cars since 2005, including 25 who were killed. When we are driving next to someone jogging on the shoulder, someone riding a bicycle, a sheriff assisting a breakdown, or a horseback rider, we need to pay full attention to the act of driving our vehicles.

This legislation defines vulnerable users, not because their lives are more important, but to recognize that when we share the road with certain users, simple negligent behavior can have fatal consequences. In many situations it is perfectly safe to change the radio station or take a sip of coffee while driving. If this legislation included everyone in all situations, it would essentially make it illegal to change the radio station.

This is common sense legislation that gives district attorneys another legal option by filling in the gap between the traditional definition of simple and criminally negligent behavior.

You can read the complete text of the Vulnerable User legislation here.