The lead sponsor of the LGBT film fest is also an Uihlein and Vogel, with an Eschweiler-designed home. 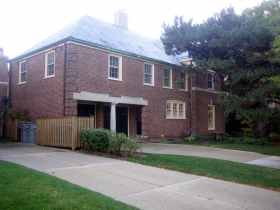 What is it about certain Milwaukeeans these days that make them so willing to open their homes for good causes? We have seasonal events like the annual Milwaukee Breast Cancer Showhouse, a House Confidential honoree, for example, [Story] and a number of others where Milwaukeeans throw open the doors for charity.

This is not like the old days when folks like Mrs. Gustave Pabst of Terrace Avenue might only have a social equal like Mrs. August Uihlein come over from Lake Drive for a charity tea. Yes, that was a very exclusive time for Milwaukee’s wealthy. Still, the union of those two prominent and philanthropic Milwaukee brewing families did, we’re happy to say, lead eventually to the birth of this week’s House Confidential honoree, Joseph R. “Joe” Pabst.

You don’t have to visit an Uihlein and a Pabst at home these days — you can do both just by visiting Joe. [He’s a Vogel, too. It never ends.]

Joe, however, has helped to make today’s house parties more democratic than their forebears, numerous charities with his open houses and other through events, often for gay-related causes. Occasionally the invitation is no more formal than a mention in a newspaper that “Joe Pabst says come over” to support one or another of his causes. People do, and it is usually loads of fun.

In this he has something in common with former House Confidential honoree Andy Nunemaker [Story]. Perhaps another 1,000 people have  been by Nunemaker’s house since we wrote about him in June. His most recent event was a brunch Sunday, October 6th for the Milwaukee Film Festival. It was held in his basement Schlitz beer hall, a nod to the brew of Joe Pabst’s maternal line.

Joe Pabst has some film festivities planned himself this week, as the lead sponsor (with the UWM Peck School of the Arts) of the 28th annual Milwaukee LGBT Film / Video Festival, which opens Thursday, October 17th and runs through Sunday, October 20th at the Oriental Theater. Perhaps his plans do not include a house party this time (he’s held them in the past for the film fest), but you can count on Joe to be at the opening night events, including an after-party at Beans and Barley following the screening of the 2013 documentary “I am Divine.” [Get your tickets here].

Joe Pabst’s residence is on N. Summit Ave., at what was known as 654 Summit Ave. when it was built in 1929 for Arthur M. Hewitt, an officer of the Securities Company of Milwaukee, who had only 7 years to enjoy it before dying in 1937. He was 49, leaving a widow and a 10-year old son and 4-year old daughter.

The Hewitt home was designed by the Eschweiler & Eschweiler firm which gave Milwaukee some of its most attractive — and liveable — mansions.

This Georgian Colonial Revival home is no exception, and could teach the McMansions of today a thing or two about good taste, proportion and quality construction. There is no evidence of deferred maintenance within or without, meriting an “A-” condition grade from the City Assessor when he last toured the interior in 2008, two years after Pabst bought it for $850,000. There are 25 varieties of marble, granite and travertine for the bathroom floors. Some was reclaimed from the building itself in this early example of green remodeling.

“I have stone from virtually every continent in the world in the bathrooms,” Pabst told a reporter for Milwaukee Home in April 2009.

South America provided the kitchen stone, with marble from Brazil.

The Pabst residence also has 10 geothermal wells 152 feet deep. They help to heat and cool the main residence and outdoor swimming pool, added during the Pabst tenure. In the winter the pool’s heat is redirected to those bathroom floors making things toasty for the Pabst toes.

Pabst has also thoroughly redecorated the place, and he is a guy who likes to have a lot of stuff around. Yet he seems able to keep it all from getting knocked about, or apparently even gathering dust. How that can be possible with all of the guests milling about is hard to fathom. Some people have a knack.

The assessor’s report on the home reads: “Interior styling and decorating choices somewhat eclectic, not all within period/architecture; may be detrimental to typical buyer.”

Get over it, girl!

Physically, the red-brick building with limestone trim is not overwhelming, but actually quite inviting. By the time Eschweiler rolled around, houses were stripped of their Victorian excesses, and a good deal of living space could be sensibly arrayed in a cohesive floorplan. Eschweiler was excellent at this. The first floor has 1,876 square feet, while the second floor has 2,332 square feet. (An exterior porch carved into the first floor accounts for the difference. It is a charming space.) Upstairs there is an attic with 525 square feet.

The home has three full baths and one half-bath. It has six bedrooms, (the Hewitts must have been planning a big family), one family room and a brick fireplace among its 10 rooms. The attached garage is 367 square feet, and there is a 550 square foot swimming pool on the 80 foot by 150 foot corner lot.

The landscape is inspired and discerning. Like the home and furnishings, it apparently needs no maintenance, but retains its beauty through some unknown force. Maybe Pabst uses spent barley for compost. Recent additions include a Japanese Maple and some hostas beneath a long-established Scotch Fir with a curiously arching branch that a lesser gardener would have hacked off.

Fun Fact: Although Joe Pabst has impeccable Milwaukee credentials, he is not a native son. He grew up in Arizona and only moved to Milwaukee around 1996. The city felt like home, he has said, recalling happy visits to his family here as a child, including Grandma Ilma Uihlein at her home on N. Lake Drive. 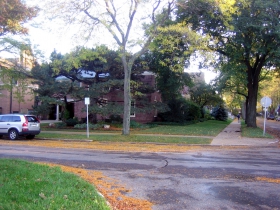 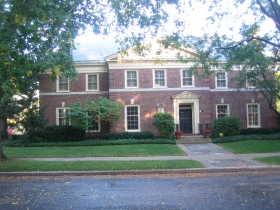 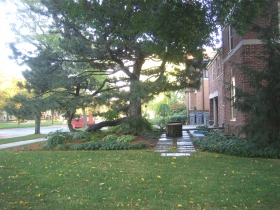