By Andrea Waxman, Milwaukee Neighborhood News Service - Oct 3rd, 2013 10:54 am
Get a daily rundown of the top stories on Urban Milwaukee 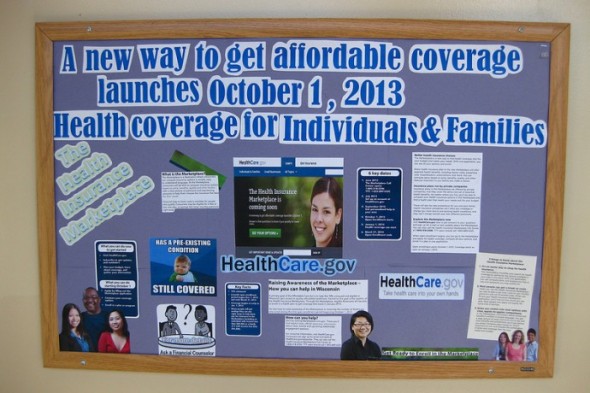 The Lisbon Avenue Health Center informed patients of open enrollment before Oct. 1 via mailings and a bulletin board in the waiting room. (Photo by Rick Brown)

Local health clinics and other organizations offering in-person counseling on the Affordable Care Act have been able to dispense a lot of information since the online marketplace went live on Oct.1. But as of Wednesday evening, few, if any, Milwaukeeans had been able to enroll.

The Centers for Medicare and Medicaid Services said in a statement that the problems were the result of high volume on the site, according to several news organizations. The agency reported that more than 4.7 million people visited healthcare.gov, the federal government’s ACA website, in the first 24 hours.

In-person turnout was light on the first day at almost all Milwaukee locations offering assistance. More people requested help by calling local government offices and other health and community organizations.

At the City of Milwaukee Health Department’s Southside Health Center, 1639 S. 23rd St., a few people trickled in during the morning, most to ask questions regarding plan differences and costs, according to an official. 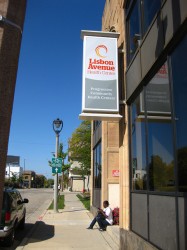 Lisbon Avenue Health Center, 3522 W. Lisbon Ave., had three certified application counselors ready to assist North Side residents, primarily by appointment. The center sent out a mass mailing to patients, many of whom are low-income and have put off doctor’s visits and healthcare because of high costs. The center on Lisbon is one of two Progressive Community Health Centers sites.

Sarah Bailey, marketing manager at Progressive Community Health Centers, patients’ chief concerns about the new plans were practical: the price of premiums and what coverage plans would include.

Bailey noted that the error messages on the federal site were frustrating to center staff as well as patients. “When we try to enroll anyone, we’re able to log people in, but not to complete the process,” she said.

Loma Haywood, a North Side resident, visited the Lisbon Avenue Health Center Tuesday. Counselors provided information, but she was not able to enroll that day.

At three clinics run by the City of Milwaukee Health Department, “the phone was ringing off the hook,” said Lori Hoffman, a program assistant at the Community Healthcare Access Program.

Jessica Gathirimu, director of the program, explained that for people who come in and can’t be enrolled, “We take down their names and numbers and we’ll be reaching out to them when we know we can complete the enrollment process.” She added that none of the clinics’ visitors appeared upset about the delay.

Gathirimu said the city health department and its partner organizations found that some people came in because they do not have health insurance and they thought they’d be able to get it immediately. Staff members explained that insurance coverage starts Jan. 1 for everyone who enrolls by Dec. 15.

John Devine is one of those who need coverage. Devine, 50, said he has a cyst behind his left ear that should be treated. Self-employed and without insurance, he said he has had a tough time proving his income when he has tried to apply for Medicaid.

“Bills are getting out of control, every time I see a doctor,” he said as he waited at the Black Health Coalition of Wisconsin.

The coalition received phone calls and visitors “non-stop,” from people looking for information on the ACA and to learn how to enroll, according to Clarene Mitchell, director of communication and collaboration.

“It’s been very busy. The system is backed up, because the demand is so great,” Mitchell said.  ”It’s showing the need for health coverage.”

Gathirimu agreed. The fact that so many people tried to log on to the main Web site shows that they “heard the messaging and are excited to get healthcare access.”