She will join Tonette Walker in a fundraiser for the Christian group, Teen Challenge. 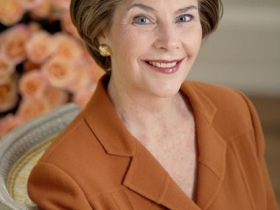 Former first lady Laura Bush is to pay a little-heralded visit to Milwaukee this month. She is one of two special guests selected for a “First Ladies Charity Banquet & Auction” to be held Friday, October 11th, 2013 at the Pfister Hotel. She will be joined by fellow first lady Tonette Walker.

They will be here for a “Great Night for a Great Cause,” namely to raise funds for “Teen Challenge Wisconsin,” a faith-based initiative which provides “men’s or women’s residential programs” for people with “life controlling addictions.”

George W. Bush, the husband of the former first lady, was a well-publicized special guest at the group’s 2010 event, also held at the Pfister. But this time, the only apparent advertising for the event, other than the usual letters to existing supporters, was in the form of flyers slipped into some newspaper boxes along a couple of the better streets in River Hills. (I’m talking to you, Dean Road and Bradley Road!)

Furthermore, the flyer only gives a telephone contact number, which is a rarity in this day of electronic communications, e-mail reservations and other social media. Nor is the time or the location listed on the flyer. Only a partial photograph of the Pfister Hotel marquee gives a clue as to the location.

Why not make a bigger fuss about it?

There is limited space, for one thing. But still, one would expect an alternative appeal for funds for the organization could have been included in the flyer, which was printed only on one side. The group’s website includes many opportunities for on-line donations.

What Exactly is Teen Challenge?

Teen Challenge was founded in Brooklyn by Assemblies of God minister David Wilkerson in 1958. The Milwaukee branch was established in 1983. It is one of 120 American and over 300 worldwide branches of what the group calls “the largest faith-based rehabilitation program in the world.”

George W. Bush, on the day he was elected president, told a reporter, “Perhaps the biggest highlight of my campaign was my visit to Teen Challenge…Teen Challenge is one of the most successful programs in our country.”

“Teen Challenge is the best organization in America working with drug addicts,” Bush said at Holy Redeemer Church of God in Milwaukee in July 2, 2002.

The organization also has received support from local individuals like Judge Derek Mosley, Atty. Vince Bobot, John Gillespie (founder of Rawhide Boys Ranch and others), and Scott Walker, whose wife will be up there on the dais with Laura Bush.

“This is a program that has shown great success,” Walker said back when he was a County Executive (although he is incorrectly identified — demoted! –on the group’s website as a Milwaukee County Supervisor).

This is the sort of organization that appeals to those who feel that faith-based solutions to social problems are a preferred alternative to government solutions.

So, if you feel that addiction is a sin, and that God is essential to a cure, this is a program that would likely appeal to you.

This is especially true, since no government program could possibly operate along the lines of Teen Challenge, which receives no government funds, but was frequently cited by Bush when he called for faith-based initiative public funding.

One thing about the stated “success” of such programs as Teen Challenge is that they are free to pick and choose their clients. Governments generally don’t have that option. This might help the group to achieve its 80 percent success rate by some measures. The group also may overstate its success by not counting participants who drop out of the program without completing treatment.

Teen Challenge Wisconsin says it provides its services — which include a 12 month or more residency — free of charge.

Applicants are expected to list — and then swear to contact — 6 people who “can help provide for some of the program costs.” The application has a section called “Personal Walk With God” and asks the candidate to certify whether or not he or she has “accepted Jesus Christ as my savior,” has been “baptized in water” and “have been filled with the Holy Spirit.”

The applicants are also expected to fill in the dates when these transformative experiences occurred.

Life at Teen Challenge residential centers, which exist for men and women, juveniles and adults, is tightly structured and includes regular devotions, prayers, church services, choir practice and chapel. Sunday church services include a 4-hour morning and 3-hour afternoon session. Such religious studies, including a weekly half-hour of “rule reading” occupy 23 hours each week, while only 16 hours are set aside weekly for breakfast, lunch and dinner.

Teen Challenge Wisconsin has about $3 million in assets, mostly real estate, and has a budget of about $2 million a year.

The Wisconsin program is run by Rev. Craig Harper, an Assembly of God minister who has been with the group from 1991, seeing it go from 8 to 75 beds. Harper is paid about $75,000 per year for his services. He is a member of the U S Swimming Foundation, the U S Golf Association and the Northshore Republicans.

SMR Farms, a division of the Schroeder Manatee Ranch in Florida has won the Tropicana Grower of the Year award for the 5th consecutive time, honoring the firm’s quantity and quality of citrus harvest.

SMR was founded in 1922 by Milwaukee’s Uihlein family as a means to create wealth for the fourth generation — the folks coming down the pike right now. The family holdings included 48 square miles of Florida property (bigger than the City of Mequon), and include many operations in addition to citrus, including cattle ranching, mining and real estate development. The family continues to roll out planned communities as part of its holdings, drawing 18,000 residents to an 18,000 acre development on the ranch. They sell the lots, but keep the country clubs and polo fields. One Uihlein, Robin, actually lives there.

3 thoughts on “Plenty of Horne: Laura Bush Comes to Town”