On the Trail of Major Pot Growers

More than 90,000 pot plants have been found in Wisconsin’s state and federal forests. 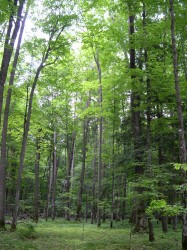 Clam Lake – Two years after it took more than 100 law officers and National Guard helicopters to remove more than 9,000 marijuana plants, and airlift out garbage that included pesticide containers and human waste, chunks of the Chequamegon National Forest floor are still scarred.

On a recent reporting mission for WisconsinEye, officials documented the growing – and dangerous – practice of illegal marijuana grows in federal and state forests, and on private land.

Before 2008, no illegal commercial marijuana grow found in Wisconsin had more than a few hundred plants. Since 2008, raids on 12 major commercial grows have destroyed about 90,000 plants, said Jay Smith, a veteran special agent for the state Justice Department’s Division of Criminal Investigation.

Bathe in mosquito spray (soon washed away by sweat), hike uphill more than a half-mile through forest and ankle-level muck west of County Highway GG, and you’ll find:

*Pockets (that are easy to stumble over) where growers dug just deep enough for two plants, sticks and green string they tied to the plants to straighten them.

*Big piles of brush. When they cleared an area, growers piled the brush in a circle around it to deter hikers, hunters, anglers and other unwanted visitors, forcing them to go around that plot of marijuana plants.

*Small-limb drying racks used after marijuana is harvested, but before growers haul it to a pick-up point, still hanging in place.

*The detritus of large commercial marijuana growing – pesticide containers, for example, and the bottle of an over-the-counter product to make water drinkable – can still be retrieved from the forest floor.

Workers at the Clam Lake grow west of County Highway GG — there also was a grow on the east side of the highway — had automatic weapons, used plastic pipes to set up an irrigation system, picked up supplies at pre-arranged times and sites before 5 a.m., hauled generators and all supplies on their backs, planted the marijuana in May and harvested it by the end of October.

Illegal marijuana grows have been found in forests in most states, Smith said.

But those who run major “drug trafficking organizations” – or international cartels – grow in Wisconsin because it has so many isolated forests and water resources. They also save shipping costs by growing it so close to the Twin Cities and Chicago, where it is often sold, Smith said.

Deer hunters discovered the Clam Lake-area grows in November 2010. After confirming that growers returned for the next season, hundreds of federal, state and local officers surrounded and raided it at daybreak in August 2011.

Smith said the officers who busted the grow risked Lyme Disease, heat stroke and dehydration for a few hours, but the Clam Lake-area growers – young men from Mexico, most of whom were in the U.S. illegally – faced those health threats for months.

“They live out there,” even sometimes growing gardens of cucumbers, tomatoes and peppers, Smith said.

One grower was caught on the first day of the Clam Lake raid; others were arrested when they showed up the next day. All got 10-year mandatory federal prison sentences, Smith said.

Commercial marijuana grows in Wisconsin have become so common that the state Justice and Natural Resources departments now warn anyone in forests to watch for illegal drug operations:

“What to look for? Signs of summer camps, such as huts, tents or makeshift structures. Watering jugs, chemical containers, gardening tools. Disturbed vegetation, including abnormal cuttings or clearings.

“What to do? Back out of the area. Don’t enter the site, as it could be dangerous. Note what you’ve seen. Write down details of GPS coordinates. Call local law enforcement or the WI DNR…You may be eligible for a reward.”

Brian C. Knepper, administrative warden for DNR’s Bureau of Law Enforcement, told this story: A Marinette County marijuana plot was found after growers nailed a handmade “No Fishing” sign to a tree and told anglers to leave. They were protecting a sizable operation: 12,300 plants on private land.

6 thoughts on “On the Trail of Major Pot Growers”