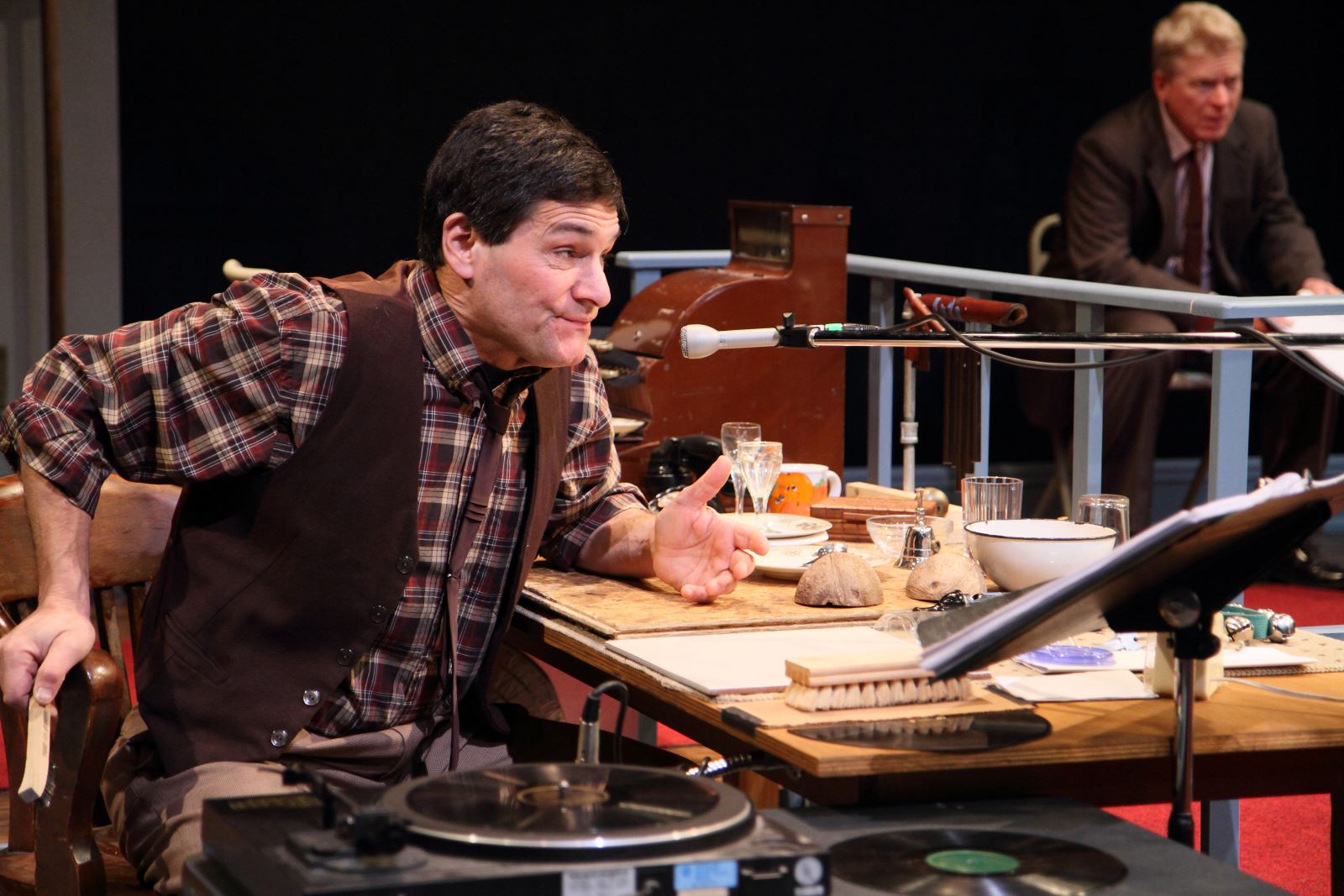 David Cecsarini’s been asked how he plans his season enough times in his long Milwaukee career to have a couple answers handy: What’s timely, what makes him think, what’s different structurally, what has a strong new voice, what showcases an exemplary actor, what’s affordable, what just clicks. But the answer he really likes is this one: “If we give the audience stuff to talk about long past being here, then we’ve done our job and we’ve stuck to our mission.”

From first glance, their audience will have more than enough to talk about. Issues of truth, lies and privacy. Issues of race. Issues of life, love and death. And issues about how funny Norman Moses is as Groucho Marx or how wonderful it is to see Next Act restage their radio show version of It’s a Wonderful Life.

It’s quite a diverse season.

It’ll begin with Perfect Mendacity, a nice example of the sort of show Cecsarini, artistic director of Next Act for the past 18 years, says he looks for when reading plays. It’s new to Milwaukee, with a clever and timely premise: microbiologist Walter (Mark Ulrich) hires a consultant (Lee Palmer) to teach him how to lie on a polygraph machine – necessary because his bosses at the defense company he works for think he or his Moroccan wife Samira (Marti Gobel) leaked an incriminating memo to the press. But that aim gets diverted as more of the truth gets revealed and Walter begins to question what he’s doing in the first place.

Cecsarini says it was the play’s whistleblowing element that first caught his eye – it’s certainly a topic in the news, with the Chelsea Manning trial having just wrapped up, and a polygraph consultant even sentenced to eight months in prison just this month for the exact same thing Mendacity’s consultant does. But the other especially appealing question, for him, is implicitly raised by the polygraph expert, D’Avore Peoples, during Walter’s training sessions. “Our consultant says, ‘You have to go in there believing in your fundamental right to lie,’” Cecsarini said. “Does he have the ability to keep his own secrets – essentially, the right to privacy? That attracted me thematically to the piece.”

In a lot of ways, Perfect Mendacity feels like Microcrisis, the sharp, witty, political play that opened Next Act’s last season. But Cecsarini points out two fundamental differences. First, while they share a mix of comedic and dramatic elements, he says the balance tips much further toward character- and circumstance-driven drama with Mendacity. The other difference speaks to playwright Jason Wells’ style of writing.

“With Microcrisis last year, if any scene was more than three minutes, I’d be surprised,” Cecsarini said. “[Wells] writes these taut, efficient, long scenes. There are five scenes total, and three of them are close to 20 minutes or a half-hour apiece, in real time. And that’s quite rare these days in contemporary plays. … I like that kind of theater. It’s only people talking and what’s driving it intellectually; what are the results emotionally? It’s really essential theater.”

Next Act will open its season with Perfect Mendacity, which also features Cecsarini (doubling as director) and Edward Marion. Performances run Sept. 19 to Oct. 13; tickets range from $25 to $35 and can be purchased at (414) 278-0765 or their online box office.

And for information on the remainder of Next Act’s season, all you have to do is keep reading on: we’ve broken down all five of their shows, in the same format as former Season Ahead recaps for Present Music, Milwaukee Chamber Theatre, Boulevard Theatre and the Milwaukee Rep.

Synopsis: Walter, a microbiologist for a defense contractor, hires a polygraph consultant to help him lie about the leak of an embarrassing memo that could incriminate him and his Moroccan-born wife, but the series of sessions quickly reveal there’s more to this story than meets the eye.

Production Notes: Mark Ulrich will play the lead role, with Lee Palmer and Marti Gobel playing the polygraph consultant and Walter’s wife, respectively. Edward Marion and Cecsarini (also directing) round out the cast.

David’s Thoughts: “I would describe this show as a man struggling with an emerging conscience. … It didn’t take me long before I saw Mark Ulrich in the role of Walter. It was making sense, it felt he was the kind of guy who would be going through all this stuff. Plus, Mark is also the kind of actor who can handle a large load – he’s onstage pretty much all the time.”

Groucho: A Life in Revue, by Arthur Marx and Robert Fisher

Synopsis: Groucho Marx tells the life story of himself and his fellow Marx brothers, from their humble Brooklyn beginnings to their vaudeville and film stardom and beyond.

Production Notes: Norman Moses once again slips into the role of Groucho Marx, who he’s embodied once before at Next Act (in 1999’s Room Service) and several times at the Skylight (most recently in A Day in Hollywood/A Night in the Ukraine). Cecsarini and Chris Klopatek join him as Marx brothers Chico and Harpo respectively, with Jack Forbes Wilson as the show’s musician and Alexandra Bonesho and Chase Stoeger playing several roles. Pam Kriger directs.

David’s Thoughts: “The play centers on Groucho mostly, but it’s sprinkled with some of their comedic bits and musical stuff. It’s a nice mix that doesn’t challenge an audience the way we usually do. And I think we owe them that much at the holiday time. We’ll have fun.”

Synopsis: Set in 1950s Milwaukee, employees of a radio station about to switch formats and go all-music prepare to perform their last live radio drama: a Christmas-time production of It’s a Wonderful Life.

Production Notes: The show was a runaway hit for Next Act last season, so director Cecsarini’s getting the band back together, with all six performers (Debra Babich, Bo Johnson, Mary MacDonald Kerr, Norman Moses, Jack Forbes Wilson and Cecsarini himself) returning. MacDonald Kerr will do some script tweaking, and write new commercials including a potential beer medley.

David’s Thoughts: “People loved the Milwaukee nostalgic connection stuff that they recognized. … There’s the radio studio ambiance, the backstory – which gets you at least tenuously connected to those actors as people – and then Wonderful Life kind of takes over, and it still holds a power to it. The combination of all that keeps people engaged on multiple levels, and I think that was part of the success of it.”

Synopsis: Two law partners (one black, one white) debate the merits of a case they’re considering taking up: defending a wealthy white man accused of assaulting a young black woman. Their debate grows increasingly charged over time, and quickly becomes a searing cross-examination of the sociopolitical issues of race.

Production Notes: Edward Morgan directs; Cecsarini and Lee Palmer will play the two lawyers, with Jonathan Smoots taking on the role of the white defendant and Toni Martin playing a black, female legal assistant recently hired by Cecsarini’s character. This marks the first time Next Act has staged a Mamet play.

David’s Thoughts: “The title of this one, of course, attracted me, and it was relatively new. So I took a read on it, and honestly, I think I read it straight through. I didn’t put it down. And it was extremely interesting. Very well-written. Not as much of that shotgun, back and forth ‘fuck you, fuck you,’ Mamet jabber; there was a lot more substance to the writing.”

Three Views of the Same Object, by Henry Murray

Synopsis: An older couple, Poppy and Jesse, made a pact years ago to leave this world together should one of them become terminally ill. After Poppy is diagnosed with terminal cancer, three parallel versions of the couple grapple with the issue now lying before them.

Production Notes: Each version of Poppy and Jesse will be played by a different pair of actors, with Jim Pickering and Laurie Birmingham a pair still struggling with their pact, John Kishline and Susan Sweeney a more accepting duo, and Flora Coker alone, her Poppy unable to let her die with him. Jenny Wanasek plays a helpful neighbor, and Shawn Douglass (who first pitched the play to Cecsarini) directs.

David’s Thoughts: “I find this play more about life and relationships and partnerships than it is about suicide or suicide pacts. That’s certainly part of it, but as one couple’s desperate answer to preserve the life that they want. … I think it shows us different forms of expression of the same level of passionate love. It allows for differences of couples, different forms of love, as long as it’s there.”