Lots of new bike lane segments add up to 27 miles of new lanes within Milwaukee. 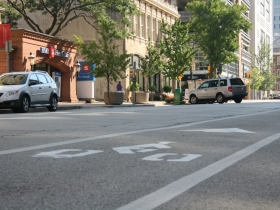 Kristin Bennett, City of Milwaukee Bicycle and Pedestrian Coordinator, informed Urban Milwaukee via email that, “this grant is targeting ‘low hanging fruit’ locations that are included in or consistent with the City’s Milwaukee by Bicycle Plan.” Meaning the city is targeting those streets which are wide enough to install bicycle lanes with little changes to intersections, lane configurations, transit operations, parking, and did not require any construction, beyond striping, to implement.

The remaining 10.45 miles of bike lanes will painted through October as long as the weather allows.

Today’s meeting of the Common Council’s License Committee started with a bang.  The nightclub Onyx’s Class B Tavern and Public Entertainment Premise license was non-renewed on a 4 to 1 vote, with Ald. Milele Coggs voting against the motion. This hearing started at 8:30am and lasted until 1pm, with the Milwaukee Police Department giving extensive testimony regarding fights, public disorder, and shootings happening at the club.

On a lighter note the new Anodyne Coffee Roasting Co. at 224 W. Bruce St. will soon be adding a little kick to your coffee as they received approval for a Class B Fermented Malt Beverage, Class C Wine, Public Entertainment Premise (Requesting Bands and Instrumental Musicians), and Food Manufacturer Retailer’s License.

7 thoughts on “Eyes on Milwaukee: 27 Miles of Bike Lanes”