Is Safety on Rural Roads a Problem?

By Dave Schlabowske, Bike Federation of Wisconsin - Sep 6th, 2013 12:50 pm
Get a daily rundown of the top stories on Urban Milwaukee

The Outagamie County Sheriff is still investigating a crash that left a person riding a bicycle dead and puts the fatality count at nine this year compared to eight at the same time in 2012. If you look at the statistics from the most recent weekly fatal report, you can see that most fatal crash numbers are down, but with the exception of people riding bicycles. Although the count is up, since millions of people have ridden bicycles in Wisconsin this year and fewer than ten have died, I still contend riding a bike is a safe and healthy way to get around.

Now I bet if Tom Bamberger, a fellow bicycle riding photographer, is reading this, he will take issue with that statement. After my recent post Another Fatal Crash: Why we care and you shouldn’t worry, Tom called me to say he thinks I need to qualify my statement about the safety of riding bicycles. Tom argued that while he agrees it is relatively safe to ride a bicycle in urban areas, riding a bike in on country roads is a different thing. Tom said he feels quite safe riding his bicycle around Milwaukee, because people driving cars are expect to share the streets with people on bicycles. Tom argued that out in the country or suburbs, people driving motor vehicles don’t look for bicycles because there are fewer of them. 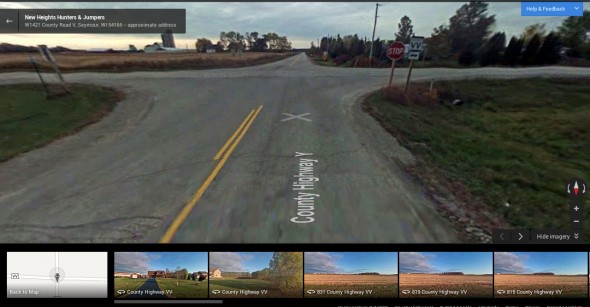 This Google Maps Streetview image shows the closest intersection to the crash.

This latest crash at an intersection of two county roads near the small town of Seymour, population 3,451, is a good example of what he is talking about. So far this year, only one person was killed riding a bicycle in Milwaukee, population 597,867, yet 50% of the Milwaukee population rides bicycles. Only two in Madison, 236,901 despite the fact that nearly 10% of the 236,901 people who live in our state Capitol ride bikes to work every day, compare to less than 1% for the rest of the state. Why is it seemingly safer to ride in big cities than out on low-volume town roads in rural Wisconsin?

Is Tom right? Is it more dangerous to ride a bicycle outside the city? A while ago I was part of a review committee for a statewide bicycle crash study done by WisDOT staff. Here is what their study found:

“The report and analyses found that the largest concentration of bike-motorist crashes occurred at intersections on urban arterial streets – 94% of them were reported in urban areas while 66% occurred at intersections. Rural crashes represented only 6% of all crashes in the state, but almost 80% were on roads with 55 mph posted speeds. The fatal crash rate based on bicycle miles traveled was almost twice as high in rural areas as in urban areas.”

So the answer is a bit more nuanced, in that crashes are more likely to happen on major arterial streets in urban areas, but the risk of a fatal crash is higher on rural roads. We are sorely lacking in good statistical information on bicycle travel, but the WisDOT study went on to try to compare relative risk based on bicycle miles traveled (BMT). To get this information, they relied on the National Household Travel Study (NHTS). Wisconsin purchased tens of thousands of additional surveys to provide statistically reliable sample sizes for most of the state’s metropolitan areas and several counties. I think the NHTS significantly undercounts bicycle miles traveled, but it is the only apples-to-apples data we have to use.

The graph above that I pulled from the report illustrates the point Tom Bamberger is trying to make. The authors of the report make a similar claim:

Madison went from a moderately high crash rate based on VMT alone to the lowest crash rate based on BMT. This is because of its extraordinarily high amount of BMT for the city. This reversal in rates illustrates the importance of using a variety of crash rates to describe conditions and to realize that all crash rates have inherent limitations that can overstate or understate crash conditions.

“Conclusion: A motorist is less likely to collide with a person walking and bicycling if more people walk or bicycle.”

The “Safety in Numbers Theory” is often cited, but more a more recent study done in California drilled down further and found that part of the reason more people ride bicycles in some cities than others is good cycling infrastructure. Yes, cities like Davis, California and Portland, Oregon not only have high percentages of people riding bicycles and correspondingly low bicycle crash rates, but they also have bicycle facilities that make it safer and more attractive to ride. In Evidence on Why Bike-Friendly Cities Are Safer for All Road Users by Wesley E. Marshall, Norman W. Garrick had this conclusion:

“Overall, cities with a high bicycling rate among the population generally show a much lower risk of fatal crashes for all road users when compared to the other cities in our database. The fact that this pattern of low fatality risk is consistent for all classes of road users strongly suggests that the crashes in cities with a high bicycling rate are occurring at lower speeds. This agrees with the finding that street network density was one of the most notable differences found between the safer and less safe cities. Our data suggest that improving the streets and street networks to better accommodate bicycles may lead to a self-reinforcing cycle that can help enhance overall safety for all road users.”

The take away from all these wonky studies should come as no surprise: If you want to make it safer and more attractive to ride bicycles, build bikeways that people find safer and more attractive, like trails, protected bike lanes, cycle tracks, and bicycle boulevards. Those bikeways not only encourage more people to ride, which in itself reduces crash rates because drivers of motor vehicles expect to share the roads with bicycles. Also important, though, is that the streets designed for bicycle, pedestrian and motor vehicle traffic turn out to be safer for all users.

We will have more details on the crash in Seymour as soon as the authorities release them, but until then, you can ride your bike with confidence that it is a relatively safe and healthy thing to do. But don’t forget to advocate for more attractive modern bicycle facilities in your community. Better bikeways and streets designed from the beginning with bicycling and walking in mind are safer for all road users.

6 thoughts on “Bike Czar: Is Safety on Rural Roads a Problem?”