Send in the Cops?

Just as Milwaukee Alderman Bob Donovan was pushing to get regular police officers in the front doors of Milwaukee Public Schools, Police Chief Ed Flynn was trying to get police out the back doors of the schools.

Donovan reasoned the police officers could patrol the school halls while school is in session and hit the streets after hours, especially during the summer. Donovan is right there with the National Rifle Association, which wants to place armed guards in every school in the United States.

MPS has had a handful of police officers in several high schools since 2007, but the number of officers has never been more than 12 serving six high schools. These School Resource Officers, or SROs, have a multifunctional responsibility to educate students on the role of police, mentor these same students, and act as the first line of defense with both internal and external threats to safety.

What was there not to like? But nationally, the support for SROs has soured. Researchers point to what has been dubbed the “school-to-prison pipeline.” Statistics show arrests have skyrocketed in schools with SROs. These police officers are arresting an increasing number of students for simply breaking school rules, sending those students before judges who often issue fines and sometimes even jail time. Students are now finding themselves with a rap sheet that may have never existed had there been no police officers in the schools in the first place. An arrest is not the same as a school suspension. 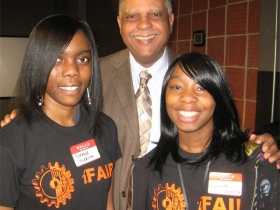 In July Milwaukee School Superintendent Gregory Thornton announced that he met with Chief Flynn, and they decided “We will be removing School Resource Officers from individual buildings to provide more opportunities for additional services throughout the district.” Instead, “The 12 officers will make regular visits to all schools.”

But this approach arguably violates the very principles of good SRO practice. School Resource Officers need to interact with and get to know students, not just patrol the school corridors. As Barbara Raymond concluded in her study for the U.S. Department of Justice: “it may be better to focus on assigning a few SROs to schools with chronic problems than to evenly distribute SROs among all schools thereby targeting some schools that have no problems whatsoever.”

UW-Madison Law School professor Michael Scott is director for the Center for Problem-Oriented Policing, which oversaw Raymond’s study. Scott also has an extensive background as a police officer and official in Madison, St. Louis, New York City, and Florida. Via email, Dr. Scott noted that “Doing SRO work is labor-intensive and requires that SROs come to know school administrators, faculty, staff, and students very well… So having a few officers spend a little time in many schools seems unlikely to yield much benefit at all.”

Milwaukee Public Schools had already experienced the impact of drop-by SROs when it first implemented the program in 2007. Custer High School had a rotation of SROs who were very ineffective when compared to Bradley Tech, which had the same officer every single day. Why would Thornton and Flynn think that drop-by SROs, who spend so little time in each school, would work in this case?

As it turned out, Thornton and Flynn were junking the SRO program entirely, although they didn’t tell the School Board that was their intention. Or so it looked to me as a Milwaukee School Board member. After all, the original School Board item and contract in August stated that the program was an extension of the original SRO contract. It took some prying, but I finally got the true outline of their program.

What Flynn wanted was to use the $471,000 paid by the school system for SROs to fund what Flynn was calling his STOP program, or “Students Talking it Over with Police.” This is a creation of the Milwaukee Police Department.  A STOP pilot study was conducted in several Boys and Girls Clubs around the city, and Flynn wanted to bring it to the school system.

Of course, SROs and the STOP program don’t exactly have the same goals. SROs are supposed to bring a degree of increased safety to our schools. STOP may do that only indirectly; its goal is to decrease the conflict between police and students. Still, if STOP works, it is likely to benefit students. But the question is, should Milwaukee Public Schools be paying MPD a half million dollars for the program?

And does the STOP program actually work as advertised?

So far, the MPD is relying on a single study conducted by researchers at UW-Milwaukee. Kimberly D. Hassell and Tina L. Freiburger studied the impact of STOP and compared the results to a control group not receiving STOP instruction at all. Students were given pre- and post-tests. The results were promising.

But it is never a good idea to place all your chips on a single study, especially when it comes to social science where all variables are difficult to control. A change in instructors can dramatically change the outcome. No one knows what the long-term effects will be. Students were given a post-test six months after attending the STOP program. Will they feel the same way a year later? Do different age groups react differently? Clearly further follow-up research is needed.

So should Milwaukee Public Schools be paying MPD a half million dollars for this pilot program? Why not a smaller STOP pilot study instead?

MPD leaders have a big incentive to push STOP, so they can export it nation-wide. That could be a feather in the cap of MPD, not to mention the copyright benefits.

Ultimately the Milwaukee School Board did approve the program after the contract was extensively rewritten to reflect a change from the SRO to the STOP program. But I placed in the motion the requirement that the School Board receive a full evaluation of the SRO program it was abandoning and a first semester evaluation of the STOP program it is instituting.

MPS needs to find out if the Milwaukee SRO program suffered from the same “school-to-prison pipeline” phenomena other school districts have experienced. Not every district using SROs has experienced the same fate, and others, like Houston, have corrected their problems. If the Milwaukee SRO program worked so well in 2011-12, did it fail last year? If so, what happened? Why not just correct the problems?

I can tell you that placing a couple hundred police officers into schools to enforce basic school rules as suggested by Alderman Donovan is probably not a good idea unless you are going to spend a ton of money training police officers to be SROs and writing protocols to prevent unnecessary arrests. Otherwise we will send hundreds of students to the courts and jail by criminalizing their behavior. It is unlikely to make our schools any safer.

As to Flynn’s approach, I’m a little concerned that we are putting a half million dollars into an only partially-tested STOP program. I’m ready to pull the plug if the first semester results aren’t what they ought to be.

Terry Falk has served on the Milwaukee School Board since 2007 and previously served for 31 years as an MPS teacher. He has also been a freelance writer for many years.