The busy life of ex-first lady Sue Ann Thompson, who runs a foundation and writes a magazine column.

The August 2013 edition of Wisconsin Woman Magazine is on the streets, so I picked up a copy at Koppa’s Farwell Foods. As I paged through the glossy publication I came upon a column entitled “Sue Ann Says.”

What do you know? Wisconsin’s former first lady is still quite active as the founder and president of the Wisconsin Women’s Health Foundation, which she established in 1997 after undergoing cancer treatment.

Part of her outreach is her column, which appears in a number of publications statewide. For August, a month when her husband used to gorge himself on fried whatever at State Fair, Sue Ann takes us to a farmers’ market to shop for some healthy goodies. “Make the farmers’ market your choice for healthy foods!” she exclaims. [See archive here.]

The organization administers the Kohl’s Southeast Wisconsin Breast Health Assistance Fund in conjunction with the Susan C. Komen for the Cure Foundation. It also sponsors a grassroots effort called Every Woman’s Journal, which seeks to use journaling to help women cope with difficult living situations and mental illness concerns. Workshops geared for 15 women or less can be held statewide in libraries, nursing homes and other like venues.

It also sponsors the Grapevine Project focusing on nursing in the faith community.

For coordinating these efforts, Sue Ann receives a salary of $67,183, which is considered to be “below industry standards,” or so says the organization’s tax return.

Her Finance and Operations Director is Tommi Thompson, who has worked there for the entire 15 years of the foundation’s existence. Like her mother (and grandmother) Tommi has also battled cancer.

The group is advised by a 14-member board that serves without pay. Among the board members is Jason T. Thompson, the son of Sue Ann and the brother of Tommi. He is an attorney with Michael Best & Friedrich in Milwaukee. That law firm was hired by the Republican-dominated legislature to create the redistricting maps that ensure Republican dominance in the legislature for the foreseeable future.

Before taking his job at the law firm, Jason Thompson formerly served as Vice President of Development and Planning for Bulk Petroleum Corporation. During the 2012 presidential election, he was caught on camera suggesting that Barack Obama should be “sent back to Kenya.”

Bulk Petroleum Corporation , which filed a Chapter 11 Bankruptcy in 2009, was founded by Darshan Singh Dhaliwal, who also serves on the board of Sue Ann’s foundation and who was always generous in his support of the campaigns of Tommy Thompson. Thompson, in turn, helped Dhaliwal and other Asian Indian business executives with their plan to establish a University of Wisconsin satellite campus in Punjab, India. Thompson included $2.5 million in his proposed state budget to study the creation of such overseas programs, but the idea ultimately died.

The board also receives advice from Dr. Molly Carnes of the University of Wisconsin School of Medicine and Michele Bachhuber of the Marshfield Clinic, who is joined by her colleague Marilyn Follen.

Other board members include Rodman Hise, who was the treasurer of the 2008 Thompson for President campaign, Jane Blain Gilbertson, Executive Vice President of Blain’s Farm & Fleet, interior decorator Carol Bluhm Markos whose husband, Madison executive Dennis Markos was appointed to the State Fair Board by Governor Thompson in 2000 and who gave him $2,500 for his unsuccessful 2012 race for the U. S. Senate seat now held by Tammy Baldwin. Lisa Cudahy, the ex-wife and companion of Milwaukee philanthropist Michael J. Cudahy also serves on the board. 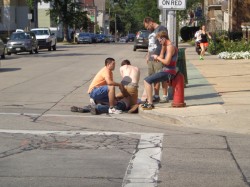 Citizens subdued a disorderly man in front of St. Hedwig’s church on the corner of E. Brady St. and N. Humboldt Ave. Sunday afternoon, August 24th. I had just come around the corner when I noticed some unusual activity. Within moments a number of young men had subdued another one who was being unruly. This was not a street fight, or a drunken brawl, it was clear, but was an attempt to immobilize a disturbed individual. They held the struggling man down and waited — and waited — for the police to come. When the police did come, the man shouted a racial epithet to his captors (everybody in the proceeding was white) and then said, “I just wanted to go back to Montana.”

Apparently terrifying people on Brady Street was his idea of the best travel agency, and the Milwaukee Police Department paddy wagon as the best vehicle.

According to Steph Salvia of the Brady Street Business Improvement District:

“The guy was cranked up and was jumping in front of and on the hood of cars driving by on Brady Street! Another guy came along and talked him out of the road. In the meantime, people were trying to call 911. The guy who talked the crazy one out of the road ended up getting into a fist fight then… one good blow to the face had crazy on the ground and then people held him down til the cops showed up 20 MINUTES LATER!!!!!!! The guy kept going on about losing his soul mate yada yada- clearly depressed etc. But OMG… people were on hold for over 5 minutes just to get THRU to 9-1-1 and then 20 minutes went by. Lucky it wasn’t a life-and-death situation cuz everyone would’ve been dead by that time! I hope he finds his way back to Montana.”

Dr. David Nowacek was hired as an adjunct professor in the sociology program at Marquette University. He specializes in ecological and sociological issues, he says, and takes his students on field trips to see how the built and natural environment affects human interactions. Milwaukee should provide a good field for study for his students as numerous projects come together here, including the Water Accelerator on W. Freshwater Way. The city has begun clearing the Reed Street Yards immediately to the west, doing site remediation on the old rail yards – coal yards in the heart of the city. Nowacek also says he plans to have his students study the unlined area of the Deep Tunnel Project, where courts have ruled that dewatering of the subsurface has caused subsidence in numerous buildings, including the Boston Lofts. …. Victor Ray, president of the Walkers Point Neighborhood Association from July 2011 to July 2013, has sold his home here and moved to The Villages, a planned community in Florida so large it has its own assembly district. Ray had asked for his Milwaukee home to be included in House Confidential, apparently not realizing that a mention in House Confidential is not a favor to be granted, but an honor to be bestowed. … Randy Crump, president of Prism Technical, a firm that helps small contractors land jobs on big projects, says he is thinking of moving his company to the former Finney Library, 4243 W. North Ave. Crump has circulated an online survey asking for community input as to what folks would like to see in the half of the building he does not plan to immediately occupy. … Something similar is going on at Brewed Cafe, 1208 E. Brady St. where visitors are asked to comment on four proposed redesigns for the coffee shop, now that it has a liquor license. Let’s hope there are more opportunities for citizens to weigh in on design and development proposals.

The party so big that its directions are simply, “Milwaukee” is set to roll on the streets of urban Milwaukee during the Labor Day weekend, and no city is better prepared to host a megafest. It will be loud Downtown (and everywhere else in the metropolitan area) as tens of thousands of Harley riders converge on our city.

Now, I need a Harley like I need a hearse, but I do appreciate the infinite varieties of the machine, which can be customized with innumerable components, and the elegance of its design, as well as the company it brings to town. The Harley festival will overlap and augment a number of neighborhood events in the city, including the Third Ward Art Festival, August 31st – September 1st, where a new sculpture will be dedicated on N. Broadway on Friday, August 30th. … Brady Street will be motorcycle traffic only on Friday and Saturday … Harley might be the Iron Horse (or is that “Hog?”) but Steel is Real — for bicycles anyway. “Steel is Real Milwaukee 2013” will take place Saturday, September 7th, at Cafe Hollander, 2608 N. Downer Ave. Registration is at 8:30 a.m., and the 25-mile race, limited to steel-framed bicycles, kicks off at 10 a.m.

“In the history of cycling there has never been a machine more elegant” than the steel-framed bicycle, the organizers note, so no aluminum or carbon vehicles will be permitted on the ride. Speaking as a devotee of Chromium-Molybdinum 4130 steel alloy, I agree that steel bikes are the most beautiful and durable bicycles on the road, and it will be a treat to see some of these bikes on the ride. Prizes will be awarded in numerous categories, including best bike and best dressed cyclist. Fuji and I will sit this one out, thereby giving you a chance to win.

2 thoughts on “Plenty of Horne: What Sue Ann Says”